You are at:Home»Latest»Hibs Star Porteous Heaps Praise on Lennon

Ryan Porteous has heaped praise on Neil Lennon ahead of Hibs’ trip to Celtic Park on Sunday. The 20-year-old was given his SPFL debut away to Rangers for the Edinburgh side by the Irishman and Porteous is grateful to his former manager for giving him the self-belief to compete in the Premiership.

As reported by the Scotsman, Porteous reflected on the one-on-one chat that he had with Lennon that inspired him to be part of the side that beat Rangers 2-1 at Ibrox.

“He was brilliant with me. He gave me an opportunity when I didn’t think I would get one.

“My first start was Rangers away. To have such faith in a young boy was something. And he convinced me that I was ready, when I probably wasn’t.

“He was great with me and I have to thank him for what he did. Looking back, I should probably have been a lot more nervous than I was. But he does get in your head, he does convince you that you’ll be fine. He did that with me. 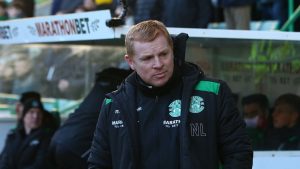 “He pulled me into his office on the Thursday and said: ‘Ryan, I’ve got to play you…I’ve got nobody else’, but he told me: ‘You’re ready, you’re a man, you’ve been training with the first team, you’ve done well – just go and do what you’ve been doing’.”

“But he’s that kind of guy who just makes you believe you’re the best player.”

Porteous will now be looking forward to being part of Jack Ross’ side that visits Celtic Park on Sunday, hoping for a positive result after their 3-0 thrashing of Aberdeen last weekend. The Hibees sit in 6th, one point behind Kilmarnock.

The 20-year-old has struggled with a knee injury since January 2019 limiting his appearances in all competitions to just 13.

Christie Reflects on Potential Move from Celtic with No Regrets

Previous ArticleWatch: Celtic’s Last Three Encounters with Hibs
Next Article Christie Reflects on Potential Move from Celtic with No Regrets