You are at:Home»Latest»Honest Men in the semi-final, Dishonest Foes in the Final

Six days after an impressive first half performance led ultimately to a 4-0 turning over at the hands of Rangers in the League Cup Final, Ayr United returned to Hampden to play Celtic in the Scottish cup semi-final, on this day 23 March 2002.

Ayr exited their second domestic cup in less than a week. Much like that League Cup final the Honest Men put up a good fight, in the first half in particular, before Henrik Larsson and late goals from substitute Alan Thompson saw them fall just short of competing in both domestic cup finals of 2002.

On a pitch that could only be described as a gluepot, Celtic progressed to the Scottish Cup final but made as heavy weather of it as the underfoot conditions. 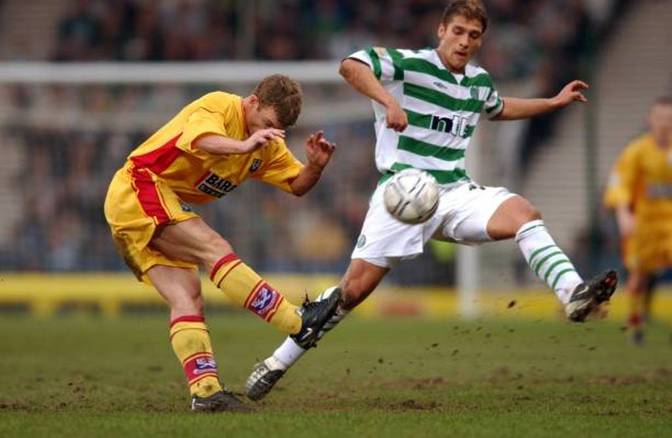 Hampden was pretty much half empty as a crowd of only 26,774 turned up at the national stadium to see the Hoops eventually prevail 3-0.

Ayr United were first to threaten when John Robertson tested Rab Douglas early on but there was nothing in the shot to genuinely concern the keeper.

Celtic had a couple of decent efforts in an uninspiring first half both from John Hartson. One over the bar and another just past the post, before Steve Guppy left the action after injury and was replaced by Alan Thompson. A disappointment for Guppy ended being an important substitution for Celtic.

Ayr had the best two chances of the first half falling first to James Grady and then Paul Sheerin.

First of all Grady had Bobo Balde looking like he was trying to swat a wasp from attacking his ice cream on Ayr beech, as United’s diminutive striker took advantage of Balde’s cumbersome attempts to clear to dart between the defender and the onrushing Douglas who sensed the danger. Thankfully Grady lost his own bearings a little and put the ball past the post. It was real let-off for Celtic.

Sheerin then took advantage of lethargic Celtic defending. As the Hoops backline failed to close down the midfielder Sheerin mananged to fire a strong left footed shot from 25 yards out at the angle of the box. On this occasion Douglas managed to parry and Lennon cleared.

A quick aside on Neil Lennon. It appears Lennon’s every touch resulted in cat calls and boos from the Ayrshire support. This was the first time Lennon played against Ayr United and he had no history with the club. There had been no early flashpoints either. Makes you wonder just what Lenny had done to warrant such treatment. Perhaps they didn’t like his haircut. 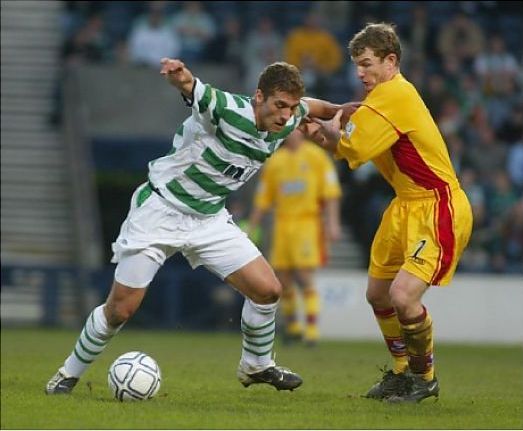 When the second half began it was Lennon who set the opening goal in motion when he fed Didier Agathe on Celtic’s right wing in 49 minutes. Agathe’s ball to the front post was met by, and the all-important first goal scored by, a surprisingly laxly marked Henrik Larsson.

The second goal and the one that effectively ended the game as a contest came from a contentiously awarded free kick. Agathe went to ground after a foul from Ayr’s Paul Sheerin and it was within range for Alan Thompson. Perfectly in range as it turned out.

Alan Thompson struck a delicious free kick from 25 yards that flew into the top corner. It had taken longer than expected however that 81st minute goal broke the resolve of a stuffy Ayr United side.

John Hartson then forced a fine save from Craig Nelson following a tidy pass into feet from goalscorer Alan Thompson, before Larsson fed the ball into Hartson who couldn’t get his shot away. The ball broke to Alan Thompson yet again. From the opposite side of the 18 yard box and from almost the same distance from goal, Thommo scored as good a goal from open play as he had from his earlier set piece, sending a swerving left footed shot past Craig Nelson and at the same time sending Celtic to the Scottish Cup Final.

A testing encounter then for Celtic. Tough underfoot conditions against an opponent lacking in style but not in substance, made for a difficult test.

In the end it game down to the strikers instincts of Henrik Larsson and the not inconsiderable guile of Alan Thompson’s left foot to send Celtic to the 2002 Scottish Cup Final, a final in which Celtic were denied a league and cup double after twice being ahead, by a late Peter Lovenkrands goal for Rangers in a 3-2 defeat at Hampden.

"I'm convinced there was no need to kick off in Lisbon," Birthday Bhoy Bertie tells the tunnel tale | The Celtic Star https://t.co/D6hjE3LyKu

Previous Article“I’m convinced there was no need to kick off in Lisbon,” Birthday Bhoy Bertie tells the tunnel tale
Next Article Ex-SPL Boss rules out Null and Void, Gracie’s first walk, Delay Threat to Ten in a Row