You are at:Home»Latest»How Celts For Change Played A Big Role In Saving The Club

It was in the basement of MacConnell’s pub on Hope Street, 19 October 1993, that the Celts For Change group was formed. Following a meeting that day, a committee had been created and the name agreed. Thanks in no small part to the group, the old board was ousted and Fergus McCann was able to step in to save the day.

After the Save Our Celts group’s demise, Celts For Change sought to remove the old board and create a brighter future for Celtic Football Club. Their initial committee comprised of five key men: Matt McGlone, who was the face of the organisation and at the time, Editor of Once-A-Tim fanzine; Brendan Sweeney, Colin Duncan, David Cunningham and John Thompson.

The group had been set a good example to build upon, by Save Our Celts. The organisation, founded by Willie Wilson in 1991, held an opening meeting with an attendance of 300 and further rallies that attracted more. A host of high profile speakers joined their ranks, including overthrown board member Brian Dempsey and Lisbon Lion Jim Craig. Despite early success, an ever decreasing morale among the support left the group in an irreversible decline.

Willie Wilson was invited to join Celts For Change but decided not to do so. However, it was he who put Brendan Sweeney in touch with the forbearers to the group.

Celts For Change set about their aims with quite radical action. A protest outside the Royal Bank of Scotland was the first poignant breakthrough in terms of press coverage. Consequentially, the support increasingly began to see Celts For Change as the group to champion their concerns and bring about genuine transformation.

Matt McGlone’s influence through Once A Tim fanzine ensured that a flow of information was maintained and that full explanation was given to the “Back The Team, Sack The Board” mantra. This campaign created great momentum as t-shirts bearing the letters of that phrase were spotted on the terraces at Celtic Park.

By the time BBC News gave coverage to a Celts For Change rally, meetings at city halls were being filled to the brim. With that said, the organisers didn’t operate without opposition. There seems to be a little bit of revisionism which suggests that the entire Celtic support hated the old board and wanted them out. There was in fact quite a clamorous minority who felt differently. Some fans even suggested that the group were Rangers supporters, out to destroy the club, in disguise. Nevertheless, after getting the backing of the Irish Celtic Supporter’s Clubs, Celts For Change made a breakthrough and then gradually won the trust of the Scottish based support. Over time, they curtailed the minority opposing them.

The committee worked with relentless enthusiasm, whilst keeping up jobs, marriages, and families. Their finest hour came on 1 March 1994, when they organised a boycott of the re-arranged midweek match against Kilmarnock. Some fans chose not to give up their enjoyment of following Celtic, whilst others felt that it strayed from the Back The Team, Sack The Board ideal. Nevertheless, most trusted in the group’s guidance.

Celtic beat Kilmarnock 1-0, but all eyes were firmly on the post match attendance figures. The official club attendance was given as 10,055. Little did the board know that Celts For Change had employed an agency to stand at the turnstyles and count the true number of attendees. Their figure: 8,225. The key factor was that the break even point for Celtic was 10,000 paying fans. Therefore, the boycott was a success and sent a message to the board.

A matter of three days had passed before Celts For Change’s embarrassing exposal of the board was compounded by the last minute takeover of Fergus McCann. Just a day earlier, on 3 March 1994, the old board had called a press conference which they claimed would be “The most momentous in Celtic’s history.” The conference consisted of plans for a Celtic village in Cambuslang, financially backed by a Swiss bank. These astonishing claims were found to be untrue and the reputation of the board was shattered. 24 hours later, Brian Dempsey emerged on the steps outside Celtic Park and famously said: “The game is over, the rebels have won!”

#OTD in 1994: Fergus McCann and Brian Dempsey stood on the steps of Celtic Park to deliver the news all the fans had been waiting for – The Rebels had ousted the board. Give this man a statue 🍀pic.twitter.com/GXCBhZlH00

Each of the Celts For Change committee member’s efforts are recognised in stone outside of Celtic Park. 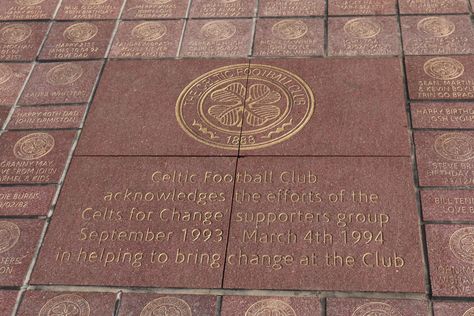