You are at:Home»Latest»“I Believe in Miracles” Title Battle goes to the last Day as Goal Hungry Celtic score TEN

Celtic entertained Forfar Farmington on the penultimate weekend of the SWPL1 season three points off Glasgow City in the title race and requiring two wins in the final two games to be assured of Champions League football, hopefully played at Celtic Park next season.

Before the team emerged from the home dressing room there was a loud blast of “I Believe in Miracles’ played and there’s no doubt that this was sext football from the Hoops who even had a Forfar player in tears at the frustration of it all. Ten nil flattered Forfar, Celtic could easily have reached double figures on BOTH halves today. 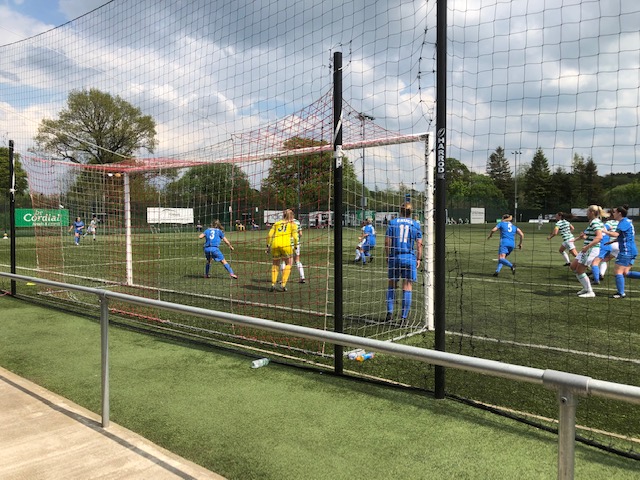 However briefly it may turn out to be Celtic overturned a nine-goal deficit in the race for goals, to go top of SWPL1 by defeating Forfar Farmington 10-0 at K-Park. The Celts showed it’s not just the winning that counts it is also the taking apart, as the Hoops did just that with five goals in each half this afternoon prior to title rivals Glasgow City’s visit to Spartans. 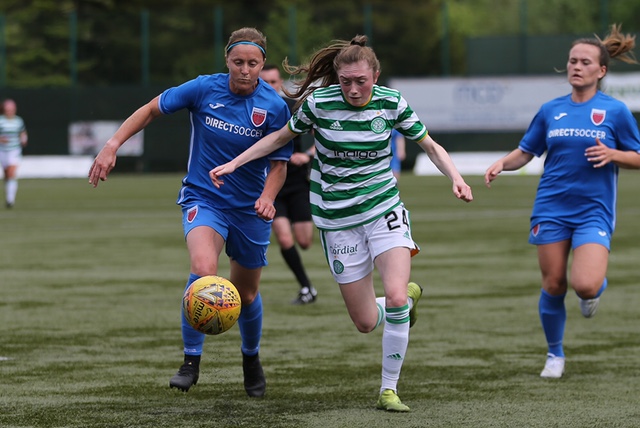 Tegan Bowie in action For Celtic in the 10-0 win over Forfar Farmington.

Pre –match Fran Alonso had been keen to play the one game at a time card alongside the need for three points rather than any thoughts of eating into Glasgow City’s nine goal advantage, but in truth goals today were important in a game Celtic were expected to win comfortably.

Fran Alonso had promised rotation of a team fatigued both mentally and physically following recent wins over theRangers and on Wednesday night in a draining encounter with Hibs and Bartle, Nicolson and Warrington dropped to the bench as Captain Kelly Clark, Jacynta and Donaldson all received starts. Meanwhile Rachael Johnstone continued in goal and seems to have been entrusted now as Celtic’s first choice ‘keeper ahead of Chloe Logan who once again was names as a sub. 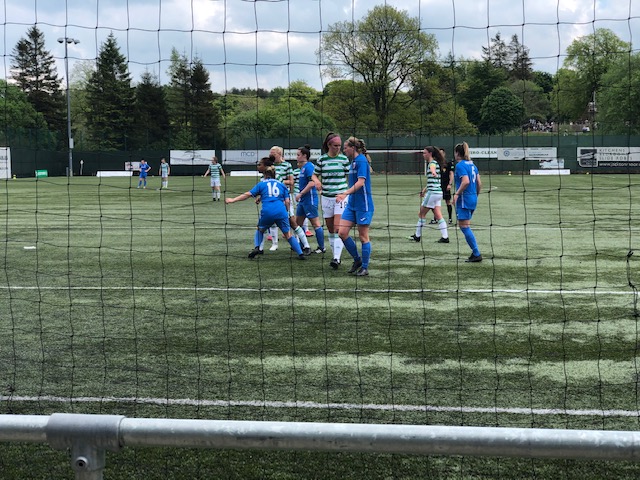 Celtic started at pace and within four minutes got an early goal that would result ultimately in five without reply before half time, as Sarah Ewens took the ball on the turn from a Hayes pass rolled her marker and coolly passed the ball into the bottom corner to put the Celts a goal to the good, it was a goal of class from Celtic’s lethal forward.

There were then further chances for both Filbey and Mariah Lee who blazed wildly over after excellent build up play, before an unlucky thirteenth minute concession for Forfar as Alana Bruce seemed confused by Mariah Lee not managing to get a touch on another excellent Hayes pass from the back and managed to loop the ball high over ‘keeper Lauren Perry into her own goal and Celtic were now in complete control. 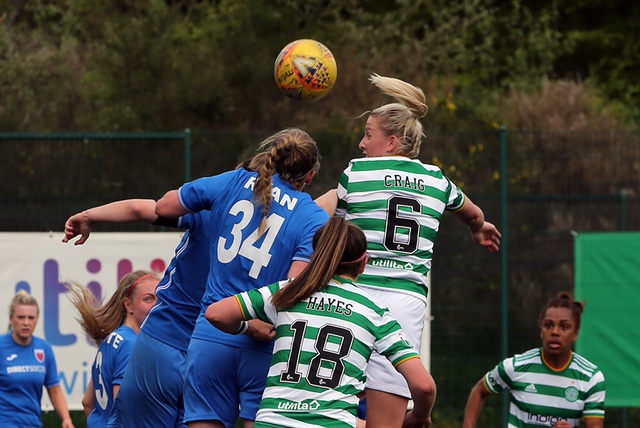 The rest of the opening 45 minutes was one way traffic and further goals were in the post. The third duly arrived as reward for Celtic’s incessant pressure as an initially well worked move fed Rachel Donaldson who saw her shot deflected wide by the goalkeeper only for the resultant corner to see Chloe Craig nick in from two yards out to head home her sixth goal in the last six games against Forfar and her 66th goal for Celtic. Not bad for a defender! 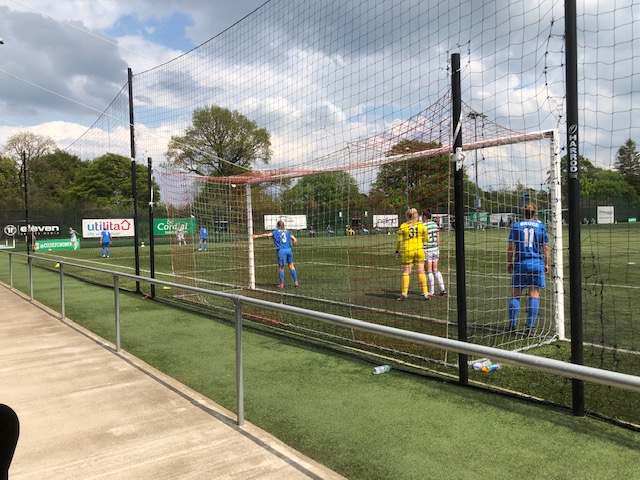 Celtic’s fourth was only six minutes away as a Chloe Craig diagonal pass was met following a sharp turn in the area by Mariah Lee who stroked the ball into an empty net vacated by Perry in the Forfar goal who appeared to have a rush of blood and vacate her line despite being well served by defensive options.

And Celtic weren’t finished yet as first Hayes fed Ewens who in turn found Anna Filbey who hit a fine effort from distance only to see the ball come back off the bar, and Sarah Ewens saw her blushes saved by the raising of an offside flag as the striker headed a simple header wide of the goal. The fifth did arrive just on half time as Anna Filbey picked the ball up from a Maria Lee lay off and struck a brilliant 20-yard effort low into the bottom corner of the net for Celtic’s fifth and the pick of the bunch. 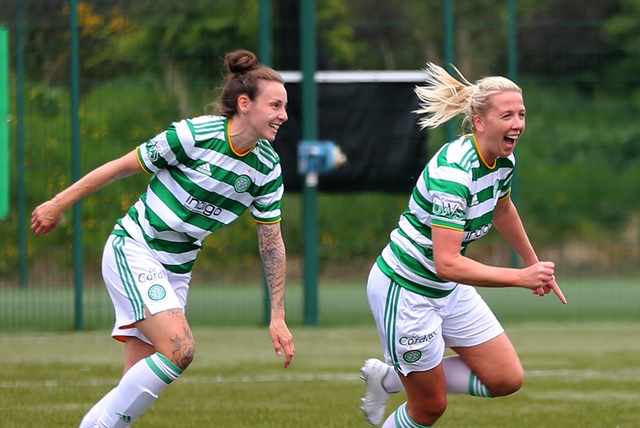 Forfar replaced their shellshocked goalkeeper at half time as Perry made way for Mowatt but it made little difference as Celtic shot into a six-goal lead only five minutes into the second half, as a Chloe Craig shot of the underside of the bar from 20 yards out saw the rebound converted by Sarah Ewens as she finished superbly into the top corner. And within seven minutes it was 7-0 as Celtic’s magnificent 7 Mariah Lee tapped in after a Kelly Clark header saw an overhead kick attempt spilled by Mowatt as Lee stabbed home the rebound. 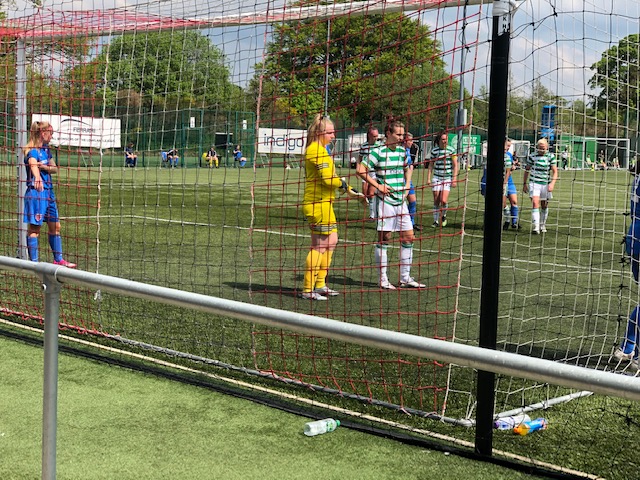 With eleven minutes left it was 8-0 as Chloe Craig grabbed goal 67 of her Celtic career from the penalty spot, following an award by the referee for handball. It seemed a soft decision but with goals needed Chloe Craig was calmness personified as she guided the ball to the ‘keepers right somewhat nonchalantly from the spot.

Then two minutes later Celtic went 9-0 up and the goal advantage held by Glasgow City pre-match disappeared, and Celtic were within one goal of going top of the league. This time Lisa Robertson found Sarah Ewens wide who fed Anna Filbey in the area, and the Welsh International grabbed her second of the games as she stabbed home at the second attempt following her initial effort being saved by Mowatt. 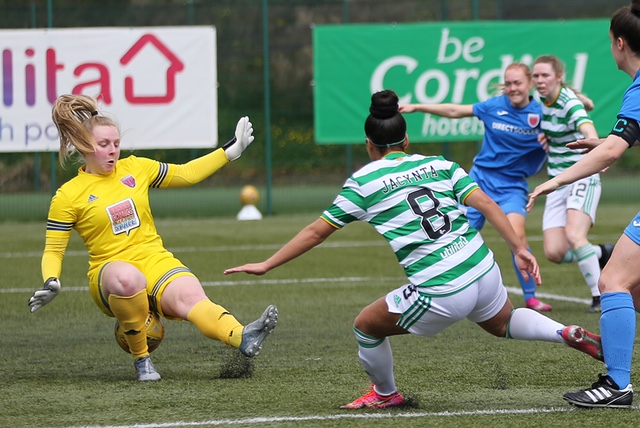 And with six minutes left to play, player of the match Sarah Ewens grabbed her hat-trick and put Celtic top of the SWPL1 ahead of Glasgow City’s visit to Ainslie Park as substitute Atkinson delivered a pinpoint diagonal pass for Ewens to attack and head beyond Mowatt and deliver the Hoops to the summit of the Premier League. 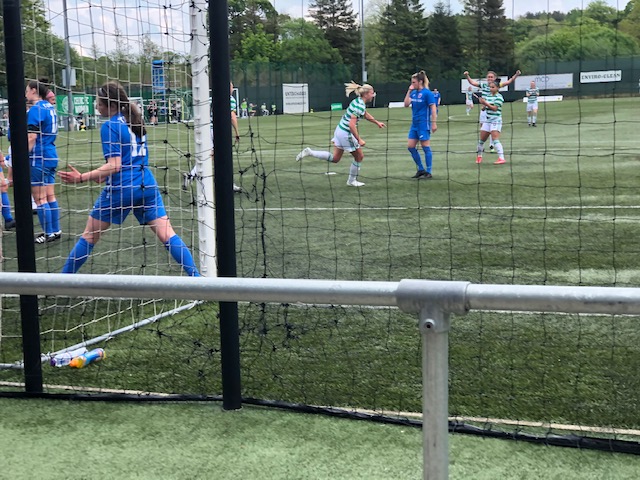 This was simply a breath-taking and relentless example of attacking football from Celtic who proved they knew just fine that goals as well as points was the order of the day at K-Park. Although hopeful I’m sure few expected double figures to be scored and Glasgow City’s nine goal advantage to be caught then bypassed in the space of 90 minutes, yet this Celtic side continue to defy the odds. 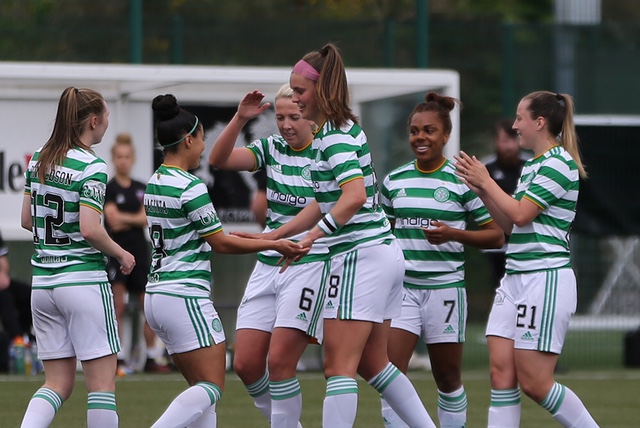 You get the feeling there is something special in the offing from Fran Alonso’s side, could it be a League Title next weekend? If nothing else a glut of goals today has heaped the pressure on their title rivals. Celtic will now take the title to the wire next Sunday as City face theRangers and Celtic take on Motherwell. Today however was double-digit delight for Celtic. And what a joy it was to watch a Celtic team top the league.

“I Believe in Miracles” rolls on to next Sunday, Love Street 1986 style…