You are at:Home»Latest»“I consider Ange a friend and a mentor,” Muscat praises Postecoglou’s influence

Yokohama F.Marinos continue to thrive under the guidance of Ange Postecoglou’s former assistant Kevin Muscat whose side currently sit a point clear of Kashima Antlers and defending champions Kawasaki Frontale at the top of the J-League after 17 rounds.

Muscat has also followed Ange’s lead in picking up Manager of the Month awards, he’s just got the latest one and he’s been speaking to KEEPUP’s Sacha Pisani about how things are going for him and Yokohama F.Marinos a year after Ange Posteoglou left the club to become the manager of Celtic. 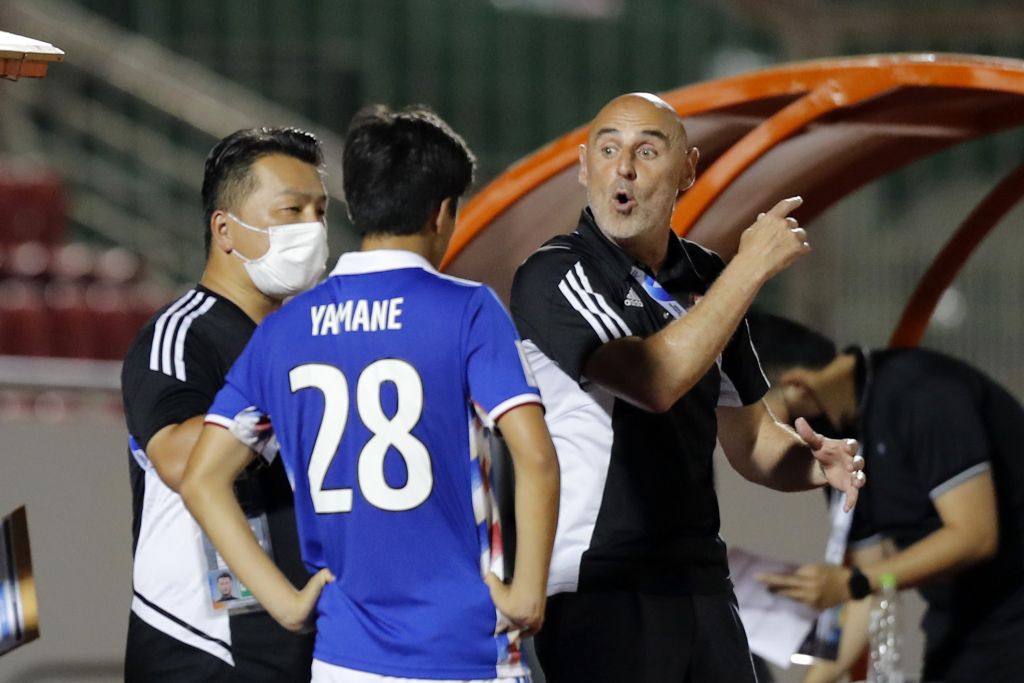 In a wide-ranging interview the most interesting section was when Muscat talked about Ange.

The former @Socceroos defender has been named @J_League_En‘s Manager of the Month for July.@prompt_fmarinos are top of the table as the #J1League prepares to resume this week.

“I had all these ideas, people talk about vision, philosophy and all the buzzwords, but you have this game style of the way you want to play and I felt at the time it was really significant.

“Then the most difficult thing is bringing that to life. How do I get this group of people to implement that vision? I was fortunate at that time with Ange, and if you recall, we played without a striker. 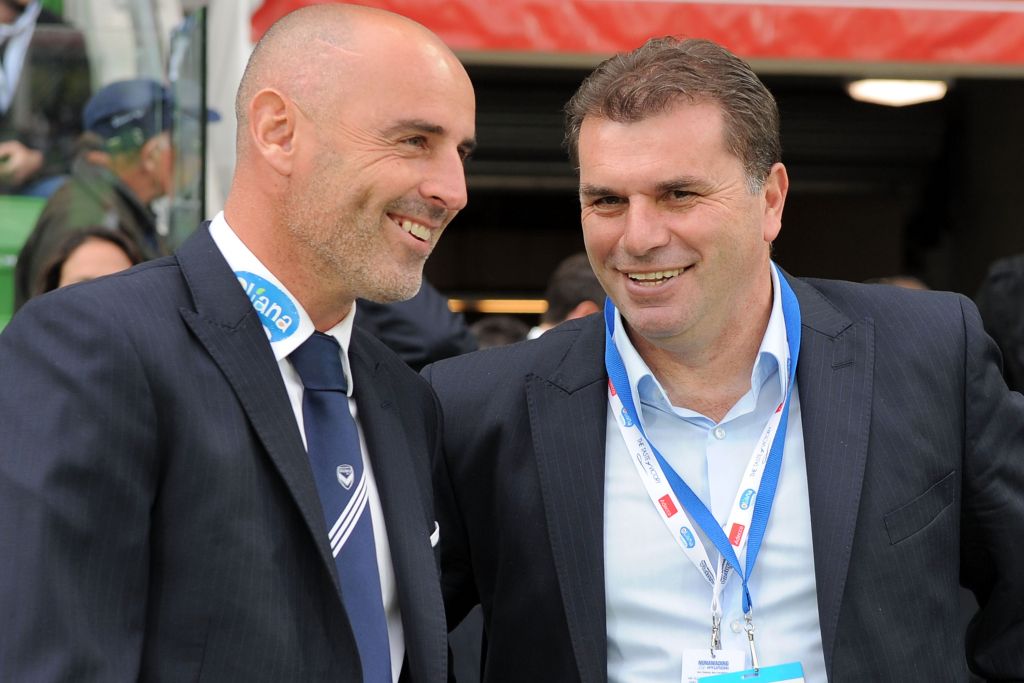 Victory coach Kevin Muscat talks to socceroos coach Ange Postecoglou before the round 13 A-League match between the Melbourne Victory and Brisbane Roar at AAMI Park on January 4, 2014 in Melbourne, Australia. (Photo by Vince Caligiuri/Getty Images)

“We played with two strikers, we call them strikers but they were actually really high and wide – Marco Rojas and Archie Thompson. Everyone else would call them wingers because they were on the wing but they were strikers in our team and scored a number of goals.

“I consider Ange a friend and a mentor. A mentor is obviously someone you can unconditionally trust for council.

“We speak about things. Sometimes there will be messages when I wake up or in the middle of the night. He is always watching the games, always watching our games and likewise.”

Muscat talking through the issues he’s faced at the successor to Ange, noted the loss of Daizen Maeda who followed Ange to Celtic at the start of the year.

“We have a squad, including four goalkeepers, of 31 players. 14 of those, almost most 50%, are new this season. We’ve had a huge turnover.

“That was a challenge and again it’s testament to the staff and the work they put into individuals. The majority if not all have picked up in terms of what we want to do. 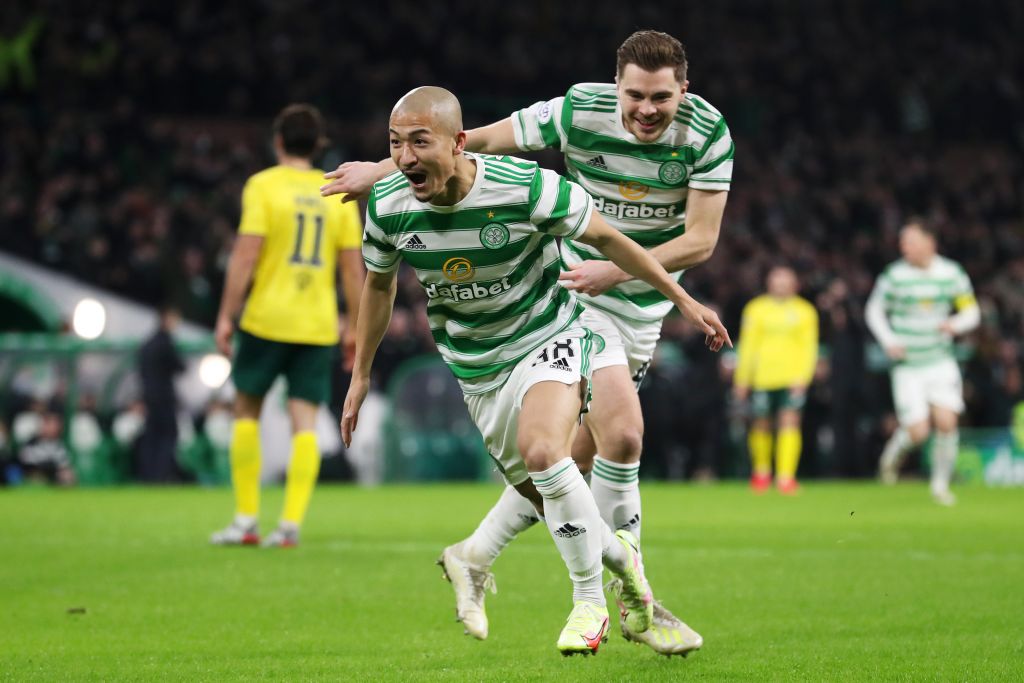 Daizen Maeda of Celtic celebrates after scoring the opening goal during the Cinch Scottish Premiership match between Celtic FC and Hibernian FC at on January 17, 2022  (Photo by Ian MacNicol/Getty Images)

“The characteristics of the players have slightly changed. It’s adapted how we go about things. Our underlying principles remain the same, that is constant and a must. Even players watching that are coming to us, know before they get here the general principles.

“Then it’s the way we actually bring that to life and it’s a really good challenge. That’s where we’ve maybe slightly adjusted in the way we penetrate for example or the way we press. That’s been a bigger one where based on the characteristics of the players, we’ve made adjustments and still adapting to it.”

Kevin Muscat has dealt with some challenges this season but has #FMarinos top of the table, playing some great football.

I sat down with him recently to discuss how he’s built Marinos post- Postecoglou.https://t.co/Eoj2JXdbXY #横浜F・マリノスpic.twitter.com/qgAX7kbR7H

So just who were the Class of ‘55? Matt McVittie’s Celtic Story
John Hughes Tribute – Celtic did what Muhammad Ali had done and “shook up the world”
So just who were the Class of ‘55? Part 3 – Jimmy McIlroy
Previous ArticleJuranovic’s value can soar with Champions League and World Cup exposure
Next Article The night Stevie Chalmers shocked World Champions Brazil and John Clark kept Pele quiet