Celtic are currently in the market for a new goalkeeper. Vasilis Barkas dropped another clanger between the sticks on Tuesday evening and fans are losing their patience with the Greek No.1. The performance has surely urged Ange Postecoglou to delve into the transfer market to see whether there are options available should he look to replace Barkas.

However, Belgian International Hendrick Van Crombrugge has said that he would be keen on a move to Celtic. The 28-year-old has one cap to his name and is the current captain of Jupiler League side Anderlecht but professed his love for Celtic.

Speaking to Belgian media outlet DHNet Eleven Sports, Van Crombrugge said that he would love a move to Celtic. 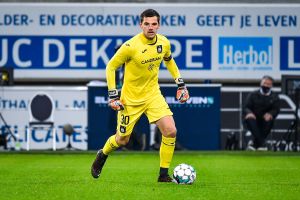 “What I like in clubs is tradition. That’s why I love Glasgow Celtic.

“If someone tells me one day that I can go and play for them I’ll be off immediately asking ‘where do I sign?’!

“Mind you my manager, Vincent Kompany, would laugh reading this. He would tell me it wouldn’t suit my style because it would be too kick and rush there!”

Van Crombrugge did admit that he was under contract with Anderlecht until 2025, emphasising that he will likely remain in Belgium. However, Anderlecht have been linked with Sparta Rotterdam’s Maduka Okoye as a potential replacement for Van Crombrugge.

“This has actually been the first summer in a long time I’ve not had to deal with transfer speculation.

“There was interest previously from many clubs, but that diminished because of my injury, so there’s no point thinking about a transfer just now.

“The important thing for me is to feel good and respected at a club and that is certainly the case at Anderlecht. My contract extension until 2025 is the best proof of mutual respect.”

With all that said, the article linking Anderlecht with Okoye states that Van Crombrugge is expected to move on his summer and the Belgian club are looking to cash-in on their captain.