You are at:Home»Latest»‘I think he went in to do it on purpose’, Dykes Accuses Brown of Foul Play

Lyndon Dykes has sensationally accused Celtic’s Scott Brown of foul play in the aftermath of Livingston’s 4-0 defeat at Celtic Park on Saturday.

As reported in The Scottish Sun, the Australian striker was happy to put himself about but didn’t like it when he received similar attention from the Celtic captain.

“Most tackles were fine. The worst was Scott Brown on my ankle at the end.

“I think he went in to do it on purpose. It’s the type of player he is and I had nothing against him.

“After the game I shook his hand. In the first half there was a 50-50 and I got him one then he got me one.

It’s part of football. I just get on with it. But I think there were a couple of fouls on me which were given as fouls to them.” 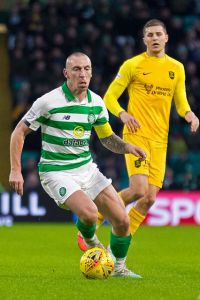 Dykes Watches on as Brown Dribbles

Dykes, who was Livi’s standout performer in the 2-0 victory over Celtic in October at the Tony Macaroni Arena; however, on Saturday, Dykes barely got a touch of the ball due to the fine defensive performance of Christopher Jullien and Brown, who kept the West Lothian side’s talisman under control.

The striker has a bit of a cheek moaning to the media about how bad Scott Brown’s tackle was when he was very happy to leave studs in the midfielder’s ankle as well as being very liberal with the use of his elbows.

If a player that uses his physicality as an attribute wanted to go unnoticed and allowed to continue to put themselves about, going to the media and moaning about Scott Brown is not the way to go about doing it.

It appears that Dykes just likes to be heard, even if what he is saying is nonsense.