DERMOT DESMOND has revealed that he made a huge offer to Sir Alex Ferguson to become the manager of Celtic back in 1997 before settling on Wim Jansen. With Rangers equalling Celtic’s 1974 record at Tannadice in May of that year, Celtic had to go all out to make sure that their Glasgow Rivals didn’t surpass the record of McNeill, Stein, Lennox and the rest of that memorable team.

However, it was a former Rangers player that Desmond looked to enlist to stop the ten – Sir Alex Ferguson. Speaking to The Athletic, Desmond revealed that he offered to double the Manchester United manager’s wages in order to entice him back to Glasgow. Sir Alex actually said that he would like to take up the offer and cross Glasgow’s divide as he would like to follow in the footsteps of Jock Stein.

“I had asked Alex Ferguson to be manager of Celtic around 1997 and I offered to pay the money myself, twice the salary he was on at Manchester United.

“He said he would like to consider it, even though he had a Rangers background.

“He said, ‘, to follow in the footsteps of Jock Stein,’ but he said his overriding ambition was to win the Champions League with Manchester United.” 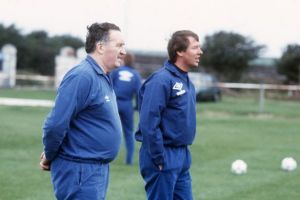 Ferguson, who was very close to Stein, was interested in taking up the offer from Desmond but preferred instead to remain at Manchester United, where he would the next season win the Champions League with United – completing a Treble.

Celtic instead went for Jansen who delivered the league title in May 1998, along with the Coca Cola Cup. Sir Alex, despite playing for Rangers, has spoken fondly of Celtic as a result of his relationship with Stein. Ferguson is widely regarded as one of the best managers ever and it is interesting to consider what the club’s future might’ve been like if someone like Ferguson had taken over.