The atmosphere at the next game a week later (Motherwell at Celtic Park) was a bit tense. You could feel the concern in the Jungle, especially when the visitors went 2 up in the first 20 minutes. We did rally though and a double from Harry Hood brought us level with still more than half an hour to go. However opportunities were missed again and Willie Pettigrew got the goal that won the game for the Steelmen.

At that time most of my local mates were Motherwell fans so I had to endure some ribbing the following day at our usual Sunday 5-a-side game at the YMCA. We did get back on the rails the following week with a 5-1 victory at Somerset Park but we were now chasing Rangers.

The next Saturday there was a break from league football as we got our first involvement with that season’s Scottish Cup – a tough trip to Easter Road. I was a bit disappointed that such a glamourous game was happening at such an early stage of the competition. During the last 9 seasons Celtic had rarely had an away draw in the Scottish Cup. And when we did it saw us go to Shawfield and Firhill.

We had always fancied a trip to the likes of Brechin or Queen of the South to give us a nice away day and the chance to see Celtic at a different venue and experience the local hostelries. Nevertheless it was always enjoyable to have a trip to Edinburgh so we would make the best of it.

The game was appealing in its own right but I felt that there was some more importance being attached to the Cup as fans felt that if the title race was indeed not going to end in satisfaction then we just had to win the other trophies. Certainly, all the regulars were back for the journey through to the capital and we joined the big crowd on the vast open terrace opposite the main stand. Dixie did it again with the opening goal in the first half in the first half and Stevie Murray sealed the win with a second goal with about 10 minutes to go. 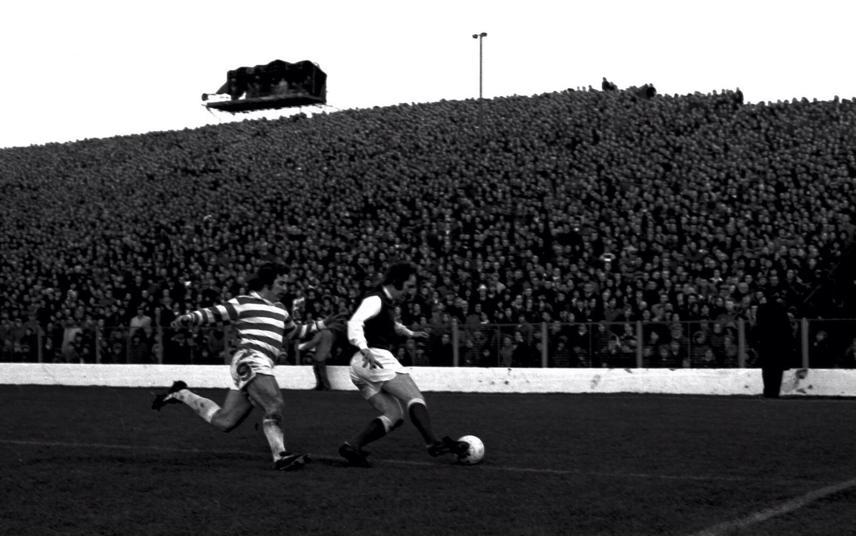 The result and the performance buoyed us all up and hopes were revived for the title challenge. However, the next two games saw us back in the depths of despair again. Heavy rain throughout the country resulted in our home game against Dumbarton being postponed so the next time we saw the Bhoys in action was a fortnight later at Arbroath. 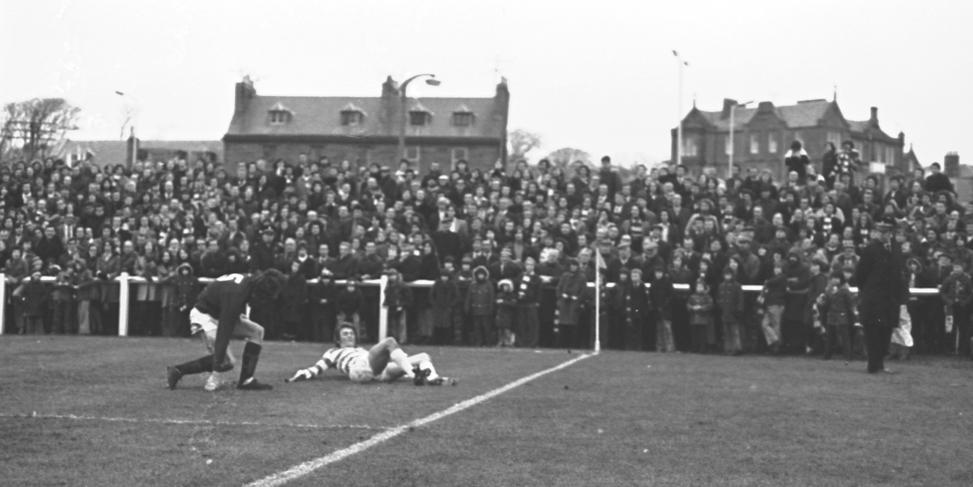 Celtic dropped a point away to Arbroath

The Gayfield side were toiling at the bottom of the division so a good victory was expected. Even when Jimmy Bone gave the home side an unexpected early lead we dominated and went in at half time 2-1 ahead. The second half was more of the same. We pushed Arbroath back into their defensive third for virtually the whole half but again missed chances and the inevitable happened with under 15 minutes to go when a breakaway saw Derek Rylance net the equaliser. It was a quiet journey down the road. We had thrown away a point and Rangers were again 2 points clear. Worse was to follow.

The following Tuesday we played our catch-up game against Dumbarton, another side battling at the bottom end of the table. At half time we were again leading – this time 2-0. But a poor second half let the Sons back in. Ex Celt John Cushley came on at half time to shore up the visitors’ defence and future Celt Tom McAdam got the equaliser in a 2-2 draw. We were now a point behind Rangers who had played a game less. 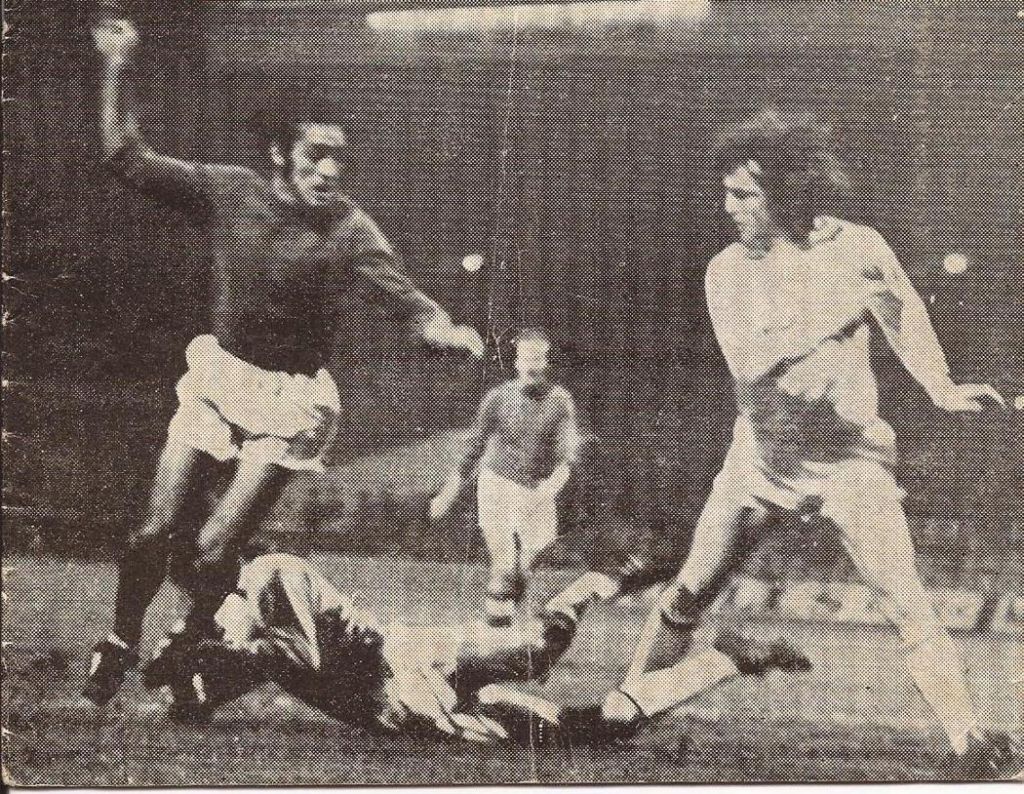 And then did the same thing away to Dumbarton

With no more games against the Ibrox men we were relying on favours from other teams – and we would also have to improve our own performances. As the second half had wore on the singing of “its magic you know, it’s gonna be 10 in a row” had faded and at the final whistle it gave way to a long and loud round of booing.

A few days later we progressed in the Cup, eliminating Clydebank but the following Saturday the league slump continued when we went back to Easter Road. Even Dixie could not find the net and we were generally outplayed by Hibs who won 2-1.

On the journey back West even the super-optimists could offer no reasons to justify our league winning chances. The following Saturday it looked as if Partick Thistle might add to our woes. The Jags lead 2-1 at half time but Kenny equalised and in the very last-minute Harry Hood netted a wonderful free kick to give us a 3-2 win. 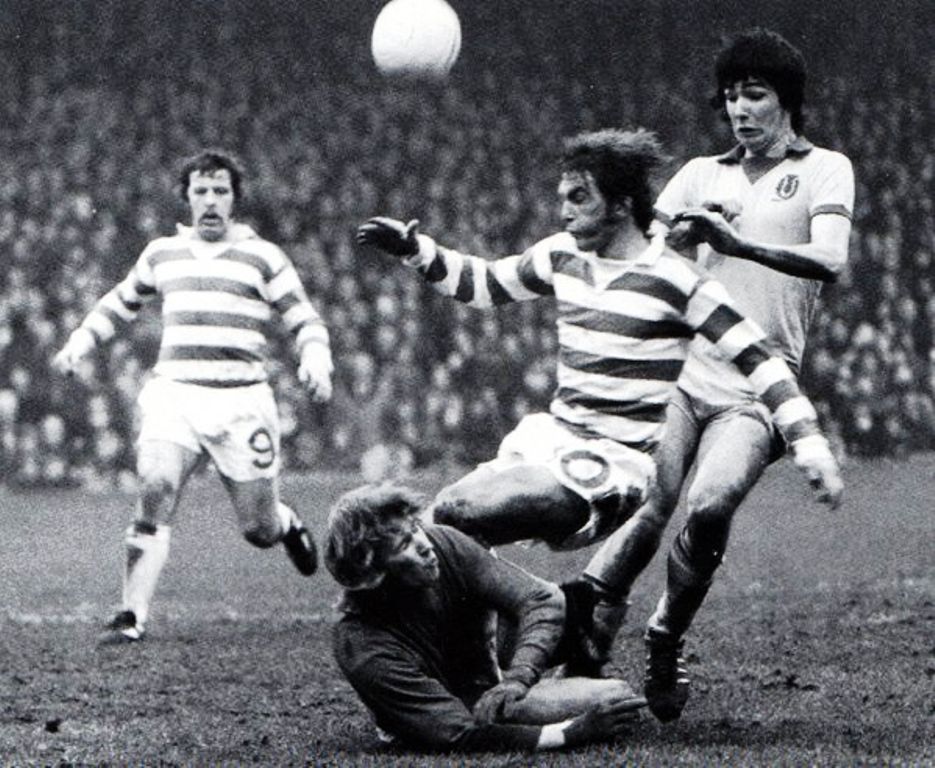 I remember the excited celebrations in the Jungle following that goal but, in Yogi’s Bar later on that evening a look at the League table showed we were still 4 points behind and running out of games. At the end of the old year we had a 2-point lead. Of the 8 games that had been played since then we had won 3, lost 3 and drawn 2. In the same period Rangers had won 6 and drawn 2.