You are at:Home»Latest»If you know the history – Celtic at birth, August 1888

August 1888 was by far the busiest month in the short story to date of the fledgling football club in Glasgow’s east end, with no fewer than nine games to be played, including six scheduled by their 20-year-old match secretary, Willie Maley, combining those duties with his playing role at Celtic Park.

Wednesday 1st saw Celtic’s first competitive fixture, a first-round match in the Glasgow International Exhibition Cup against Abercorn, played on the Glasgow University playing fields at Kelvingrove, near the site of the current Art Gallery & Museum. As would be the case fifty years later at Bellahouston for the Empire Exhibition, the football tournament would run alongside the main event being held at the adjacent Kelvingrove Park. Sixteen clubs were invited to participate, although for whatever reason, none of the great sides of the day – such as early Scottish Cup-winners Queen’s Park, Vale of Leven, Dumbarton, Renton or Hibernian – were involved.

Our opening round opponents Abercorn were based in the Ralston area of eastern Paisley, formed within months of local rivals, St Mirren, eleven years earlier. Both sides would make their opening appearances in the Scottish Cup of 1880/81, clashing in the third round of the heavily-regionalised tournament on 23 October 1880 at Abercorn’s Blackstoun Park. The hosts had already beaten their Renfrewshire rivals Barrhead and Morton by those famous Celtic scorelines of 7-1 and 4-2, however, on the day, St Mirren would prove too strong, eventually prevailing by four goals to one. Abercorn would take their revenge with a 2-0 victory in the first round at the same venue, five years later.

But their finest hour had come in the season leading up to the clash with Celtic, Abercorn going all the way to the semi-final of the national competition, drawing 1-1 with Cambuslang at home before succumbing to a 10-1 hammering in the replay, in January 1888. Cambuslang themselves would find the going tough in their first final, the following month at Second Hampden (latterly Cathkin Park, the home of Third Lanark). They faced the new ‘world champions’ Renton, featuring James Kelly and Neil McCallum, losing 6-1, a record scoreline which would not be matched until a certain Dixie Deans destroyed Hibs at Hampden in May 1972, some 84 years later, the favourite game of my childhood. 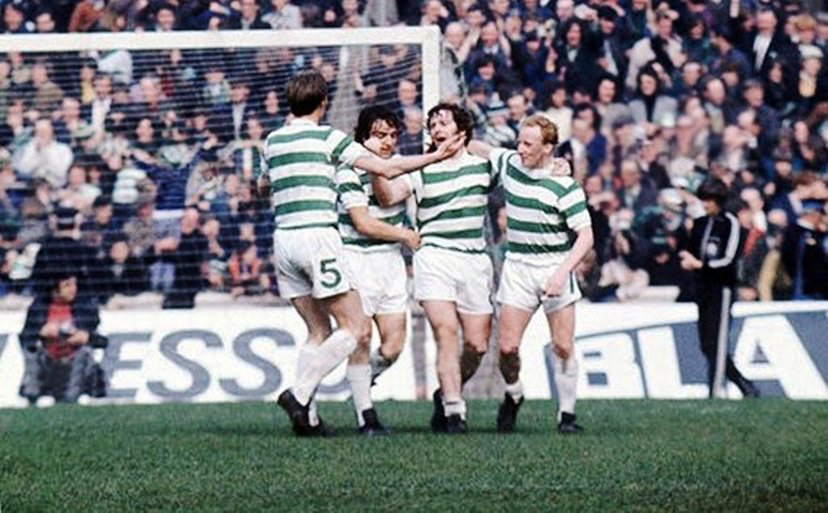 Both Kelly and McCallum would feature against Abercorn in Celtic’s first-ever competitive line-up, which was as follows:

Details of the game itself are sketchy, although Celtic did score first before Abercorn equalised just before the break. Reports of the day suggests that many within the 4,000 crowd were not so kindly disposed to ‘the Irishmen’. I guess the more things change, the more they stay the same. In any case, Abercorn declined the offer of a replay on Monday 13 August, the tie thus awarded to the Bhoys as a walkover. They would face Dumbarton Athletic in the next round, at Kelvingrove three weeks later.

In the interim, Willie Maley had arranged friendlies on the next three Saturdays.

The first game was the very definition of a ‘grudge match’, Celtic facing Hibernian at Celtic Park on Saturday 4 August, 1888. Six of the Edinburgh club’s players had made the switch to the west – the lure of employment being key – fuelling antagonism between the two which would last for decades. The irony that Hibernian had built their own squad by previously plundering other clubs in the same way – and would continue to do so moving forward – was somewhat lost in the ensuing arguments.

A combination of that background and a late Saturday afternoon slot drew a healthy crowd of 5,000 to the new ground on Dalmarnock Street, now Springfield Road. All five former Hibernian stars who had played in the midweek clash with Abercorn – McKeown, Gallagher, McLaren, Groves and Johnny Coleman – were in the starting line-up for Celtic, whilst the sixth to defect, Mick Dunbar, missed out. 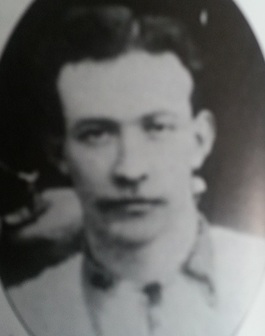 One of the ‘Leith Six’, Paddy Gallagher, would draw comparisons with a modern-day footballer who served both clubs with distinction, Scott Brown. His all-action, aggressive play made him both a firm favourite of the Celtic support and a target for abuse from opposition fans. Indeed in October of that year, he would three times be the focus for invading Hibernian spectators in a so-called ‘friendly’ in Edinburgh. Gallagher was the vice-captain to James Kelly, succeeding the legendary Celt in the main role in 1891, becoming the first Celtic skipper to lift the Scottish Cup, in April 1892, following the 5-1 victory over still-mighty Queen’s Park. Definitely, the ‘Broony of his day’ was our Paddy Gallagher.

He was in his normal wing-half role for that initial clash with Hibernian. Interestingly, the green-clad visitors seemed to enjoy much of the crowd’s support, taking the lead in the 20th minute through Smith, Willie Groves equalising for Celtic soon afterwards. Hibernian then suffered a real blow, losing centre-forward McGhee to an ankle injury shortly after the break. Undaunted, the Edinburgh side regained the lead through Naughton, Johnny Coleman levelling things for a second time before, with time running out, Groves notched his own second, Celtic’s winner, the game ending 3-2 to the hosts.

Gallagher was replaced by Willie Maley the following Saturday, as Celtic travelled to Mavisbank to face Airdrieonians in another friendly. ‘Darling’ Groves would have the proverbial ‘field day’, with five second-half goals, as the Bhoys won 6-0 in front of ‘an immense gathering’ in Lanarkshire. Neil McCallum had scored the only goal of the first period on 30 minutes, to give Celts the breakthrough.

There were 10,000 crammed into Clyde’s Barrowfield Park home in Bridgeton seven days later, as the two east end rivals clashed, two months after the hosts had dealt Celtic their only defeat to date, 4-3 in a friendly at Celtic Park. There would be no such outcome today, Celts running out 5-1 winners thanks to doubles from Neil McCallum and Tom Maley and yet another goal from Willie Groves. 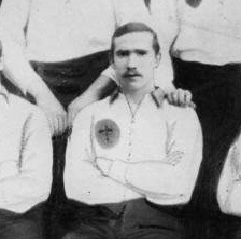 This game marked the only Celtic appearance of full-back Tom O’Kane. He had starred for Dundee Harp in their 1-0 defeat at Celtic Park in June, the Glasgow club then rumoured to be keen to sign up the Arbroath-born man. Instead, he chose to remain on Tayside and was the key figure in one of the more intriguing stories to come out of Scottish football that decade.

Just under three years earlier, on 12 September 1885, he had been part of the Dundee Harp side which recorded a 35-0 victory over Aberdeen Rovers in the Scottish Cup, setting up his chairman to send a mocking telegram to his old club, Arbroath, boasting of the huge score. Thing is, they had beaten another Aberdonian side, Bon Accord, by 36-0, a score which is still regarded as the all-time record to this day. Just to twist the knife, it later transpired that both referees had experienced difficulty in keeping track of the scores, with the legend being that Harp had actually outscored their local rivals by three or four on the day!

Three nights later, Celtic played their quarter-final tie in the Glasgow International Exhibition Cup, a match against Dumbarton Athletic at Kelvingrove. They had beaten Morton 2-1 in the first round and would be merged (or perhaps, more accurately, absorbed) with local rivals Dumbarton the following year. The new club won the inaugural Scottish League in 1891, sharing the title with Rangers after a drawn play-off, despite having a better goal difference and goal average.

These two clubs would fare very differently over the next 120 years. Dumbarton would go on to retain their title in 1892 but, to date, have not managed to repeat that success, whilst the Govan side would win 53 championships in their own right before their demise in 2012. Details of the game against Dumbarton Athletic are hard to come by. What is known is that goalkeeper John Tobin, yet another veteran of Hibernian’s Scottish Cup-winning side of February 1887, made his debut for Celtic, who led by three goals before Athletic pulled one back before the break. There would be no further scoring in the second-half, the Bhoys recording a first-ever competitive win to advance to the semi-final by 3-1.

Strangely, there would be matches played on each of the following two nights, Wednesday 22nd and Thursday 23 August. A strong Celtic side lined up at the original Cathkin Park to face Third Lanark, the Bhoys suffering a 4-3 defeat in front of 3,000, despite another Groves effort and an own goal. Sadly, only the result is known for the game played 24 hours later, a second encounter that month with Abercorn, this time at Blackstoun Park, Paisley, with the Celtic eleven running out 4-2 winners.

The final friendly match in August took place at Hyde Park in Springburn, on Monday 27th, Celtic’s first visit to the area where I would later grow up (that statement is a matter of opinion obviously, rather than fact!). Another 3,000 crowd turned out to see ‘the Irishmen’ take on Northern FC, a club based around the huge locomotive works in the railway and engineering hub in the north of the city. With McCallum again to the fore, Celts dominated and had the game won by the interval, by which time they were two goals ahead, a third for the Bhoys after the break rounding things off at 3-0.

Two nights later, the Celts were back at Kelvingrove for the semi-final of the Glasgow International Exhibition Cup. Their opponents were local favourites Partick Thistle, at that time based a stone’s throw away in Overnewton Park, Yorkhill. The Jags had beaten Airdrieonians 5-2 then Kilbirnie 2-1 to set up a first meeting with Celtic. It was a tight game, the two key moments occurring in the final 20 minutes. First, Thistle winger Ferguson sustained a bad leg injury which sadly ended his participation in the night’s proceedings. Then as the draw seemed inevitable, Celtic produced a dramatic late goal for the cup-tie winner, the first such event for which the club would later become synonymous.

Thanks and credit as always to the folk behind the wonderful Celtic Wiki, an invaluable resource for Celtic writers and historians. A special mention also for Brendan Sweeney, whose excellent book, ‘Celtic: The Early Years’, provides an unique insight into the opening chapters of Celtic’s history.

Previous Article‘It’s not me that is creating the headlines or shouting out the criticism,’ Neil Lennon
Next Article Players BLAMED, Fans BLAMED but ‘the abuse Peter Lawwell gets is very unfair,’ says Lennon