You are at:Home»Latest»“I’m ecstatic – I’m so grateful to get the opportunity to play in this team,” Celtic’s Teenage keeper

Johnstone, who hails for the the Isle of Lewis, is an established goalkeeper for Scotland at youth levels and had already made one first team start for Celtic before his second game and clean sheet in the 3-0 win over Hearts last weekend.

“I feel ready,” was the youngsters response when asked about how she felt after hearing the news that she’d be starting against Hearts and afterwards she couldn’t hide her delight at the day’s events at K-Park.

“I’m ecstatic – I’m so grateful to get the opportunity to play in this team and it’s even better when you come away with a cleansheet, so I’m very happy,” Johnstone said. Like most Celtic goalkeepers have experienced, Sunday was a game where Celtic dominated possession and forced the game while the visitors hing on desperately, happy enough getting to the interval without conceded. Concentration though must be maintained as a Celtic goalkeeper watching the match being played mostly in the opposition’s half. 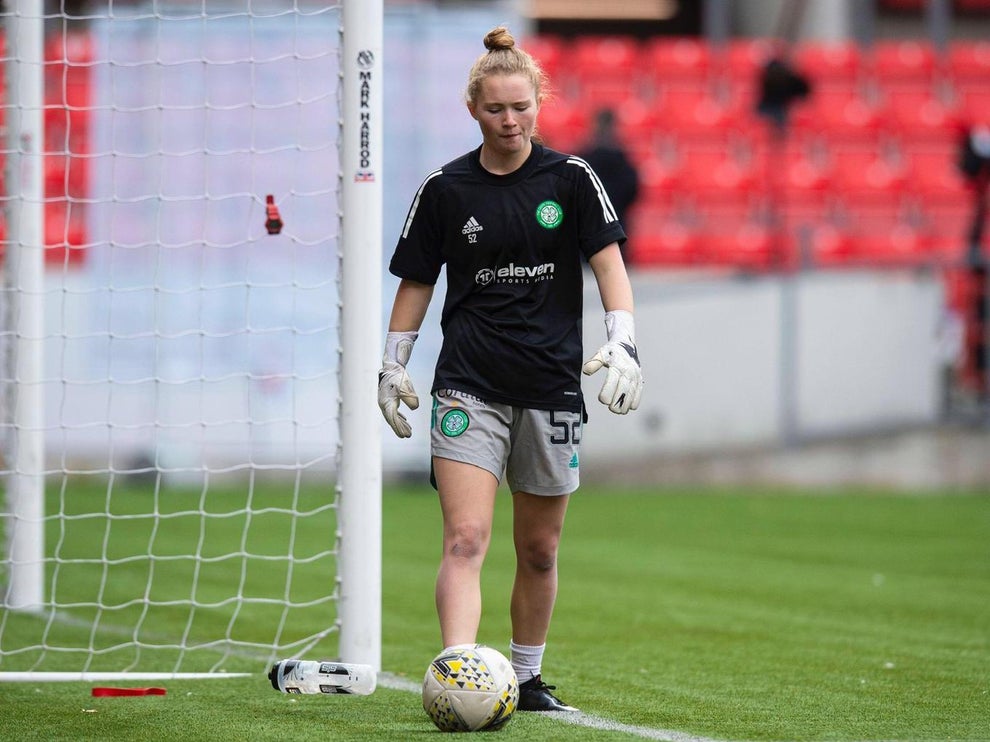 “It’s difficult in games like this, where you do have all the possession and you’re dominating, because it only takes one opportunity for them to score,” Rachel said to Colette Carr at the official Celtic FC Women’s website.

Johnstone also explained that she’s built up a strong relationship the Celtic number 1 Chloe Logan, who has done a great job helping the youngster develop as a goalkeeper. “I feel ready when the chances come. I work hard at training so when the opportunity comes I’m ready – I’m always excited as well, and have a bit of nerves, but they’re good nerves.

“It’s so important to have that relationship. We push each other on, and we have a laugh but it’s still serious, so we can get a good training session while enjoying ourselves and Chloe’s an amazing keeper so I’m learning so much from her every day and I’m really lucky to have her as that kind of mentor.”

Speaking to her own local newspaper  Stornaway Gazette a few months ago, Rachel talked about her footballing journey that has taken her all the way to playing for Celtic.

“Signing for Celtic and making my Scotland debut are my two highlights, probably the Scotland one more, because I made my debut against Poland away and I think I was only about 14, maybe even 13, and that was with the under-16s so I was a bit overwhelmed being in that team at such a young age.

“Probably my favourite save so far was when I was playing for Scotland under-16s in a UEFA development friendly tournament in the Algarve in Portugal last February against the Netherlands.

“The save came in a penalty shootout. We were winning 1-0 up until the 80th minute but they scored from a corner.

“We ended up actually losing on penalties but saving a penalty for your country I think speaks for itself. It’s quite a big moment,” Rachel recalled.

“I just went down for a foot save, overstretched and I felt a pop in my hamstring, but it’s not too bad, definitely better than we first thought.”

Rachel is fully fit now though and will be desperate for Fran Alonso to give her the nod again, with Celtic away at Spartans on Sunday. The match is live on the BBC Scotland channel, kick-off 2pm. Perhaps record that one and watch back later folks?

🧤 After making her second senior start for the Hoops on Sunday, Rachael Johnstone expressed her gratitude and told how she’s always ready whenever called upon 🍀https://t.co/zrSV0eS5if