You are at:Home»Latest»An impressive League Cup win for Celtic Women, with Heather Richards the Celtic star

Celtic Women yesterday did what the men couldn’t last weekend by defeating St Johnstone at home. In fact it was an emphatic 4-0 win at K-Park Training Academy in the Scottish Women’s Premier League Cup.

The Celtic opener was scored by Ruesha Littlejohn on 35 minutes to give Celtic a lead at the interval and a Nicole Pullar double on 49 and 71 minutes was rounded off by the fourth from in-form Heather Richards with a minute of normal time left on the clock.

After the frustrations of drawing with Stirling University last weekend in the league, this was a good afternoon for Celtic Women, who looked more like the side who hammered Rangers 3-0 a fortnight ago. 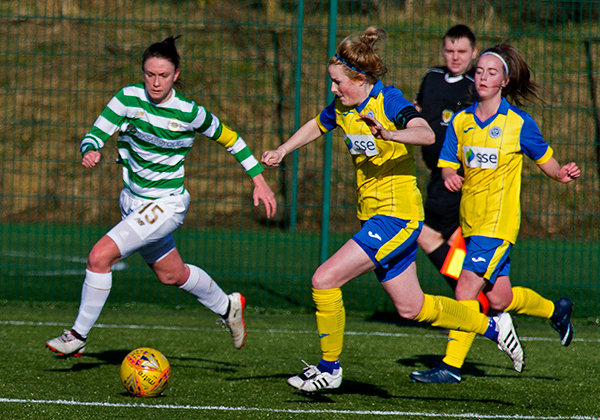 Indeed the Celts could have won even more impressively as they were awarded two spot kicks but missed them both!

During the week Celtic Women signed Josephine Giard from German football and she was put straight into the starting eleven. Also making her debut for celtic was Claire Crosbie in the centre of the Celtic defence.

The visitors sat deep throughout the first half as Celtic mounted constant attacks. It was all one way traffic but frustratingly the break-though didn’t look like coming.

The Celtic midfield was controlling the game for the home side with Kelly Clark, Richards and Littlejohn all impressing. 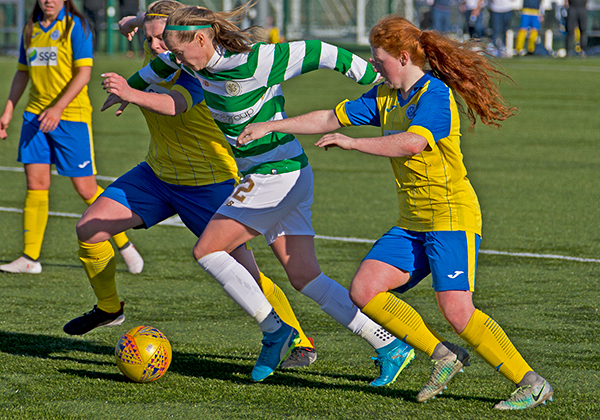 The opening goal came in the 35th minute when Richards crossed from the right and Littlejohn’s header found the back of the net, going in off the St Johnstone post. Clark then headed off the crossbar but this time the ball didn’t cross the line and the Saints women were relieved to hear the half-time whistle still only the one goal to the worse.

Celtic though came out the traps fast at the resumption and won a penalty within the first few minutes. Up stepped debutante Giard but her powerful shot struck the post and was cleared. The Celtic disappointment was short-lived though when moments later a cross from Colette Cavanagh was met by Pullar who doubled Celtic’s lead with some style.

On 53 minutes, the referee was pointing to the spot again and incredibly Celtic failed to covert again. Pillar’s effort was well saved by the Saints keeper who made it a double save when Littlejohn got her shot away from the re-bound.

Incredibly Celtic continued to hit the frame of the goal, both Clark and Georgie Rafferty had efforts that came back off the crossbar.

A third did come though on 71 minutes and it was Pullar who made no mistake this time after fine work from Giard. 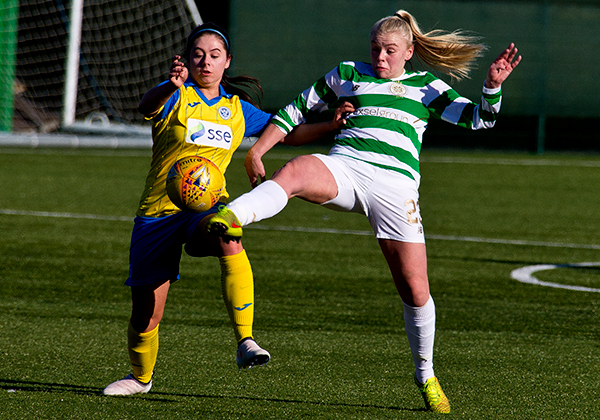 Near the end Richards added a fourth and it was no more than her fine performance deserved as Celtic moved into the next round win some style. Final score was Celtic 4 St Johnstone 0.

The Celtic Star Player of the Match – Heather Richards

Previous ArticleHaving won 55 caps, Broony tells McLeish he is retiring from Scotland duties
Next Article Roberts and Compper added to squad for Dundee game as Rodgers salutes his skipper