You are at:Home»Latest»International boss backs Celtic goalie to start on Sunday

Ian Baraclough has backed Conor Hazard to start for Celtic on Sunday in the Scottish Cup Final. The 22-year-old has received praise from the Northern Ireland manager Baraclough, who has tipped the goalkeeper for success with the Scottish Champions and hopes that Neil Lennon starts him against Hearts at the national stadium.

Speaking to The Scottish Sun, Baraclough raved about Celtic’s 6ft4 stopper Hazard and thinks that he is ready to nail down a starting spot under Lennon, starting with a game on Sunday as Celtic chase four Trebles in a row.

“And, at 22 years of age, I was desperate for Conor to get out and play first-team football. I felt he needed it now.

“Now it’s brilliant that he’s been given a chance by Neil Lennon for Celtic and I believe there’s big contract talks going on just now about him signing a new deal. 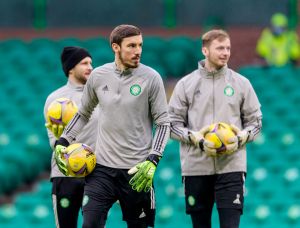 Hazard has ousted Vasilis Barkas and Scott Bain for the No.1 jersey in the last two games

“Naturally, I’d love to see Conor remain in goal for Sunday’s Scottish Cup final. But it’s a big call for Neil to make and whatever he decides must be respected.

“He’s shown his trust in Conor over two games and hasn’t been let down. That will have really bolstered his claim to play in the final. Given the pressure Neil’s been under it would have been so easy for him to stick with tried and trusted players.

“So I am full of admiration for him that he still had the belief to give an excellent prospect a big opportunity.”

Baraclough is delighted that one of his most promising talents has been given a chance to play in one of Scottish football’s showpieces. Hazard played in the 3-2 win over Lille in the final Europa League game and he kept his place in the 2-0 win over Killie at the weekend. Whilst these games have been progressively more significant, Sunday’s game gives Celtic the chance to win a fourth successive Treble.

“Conor’s got the temperament for Sunday, I’m in absolutely no doubt about that. He’s now come through a major European game against Lille and a pressured league match against Kilmarnock.”

Despite conceding twice to Lille, Hazard has looked confident and assured at the back and he will have been delighted with the clean sheet. After that game, news came out that Celtic were closing in on offering Hazard renewed terms to extend his contract.

Previous ArticleThe psychological momentum is beginning to tip in our direction, the ball is now in Celtic’s court
Next Article Could Celtic return for former favourite? Middlesbrough boss confirms talks planned