You are at:Home»Latest»Israeli pair Abada and Bitton set Celtic up for Title Push in the New Year

It was the Liel Abada and Nir Bitton hit squad who brought home a vital three points from McDiarmid Park today, as Ange Postecoglou’s Covid – and injury – hit squad left the manager with pre-match worries as to how to go about his business.

Yet no-one seems to manage crisis situations as well as the big Aussie. Indeed, you get the impression those violins aren’t allowed to be played anywhere within his earshot at Celtic Park, never mind at other clubs, as in the end a team minus Tony Ralston, Callum McGregor, Mikey Johnston, Greg Taylor and Joe Hart saw a 3-5-2 formation adopted and that business very much taken care of much of it on the back of a fine first half performance. 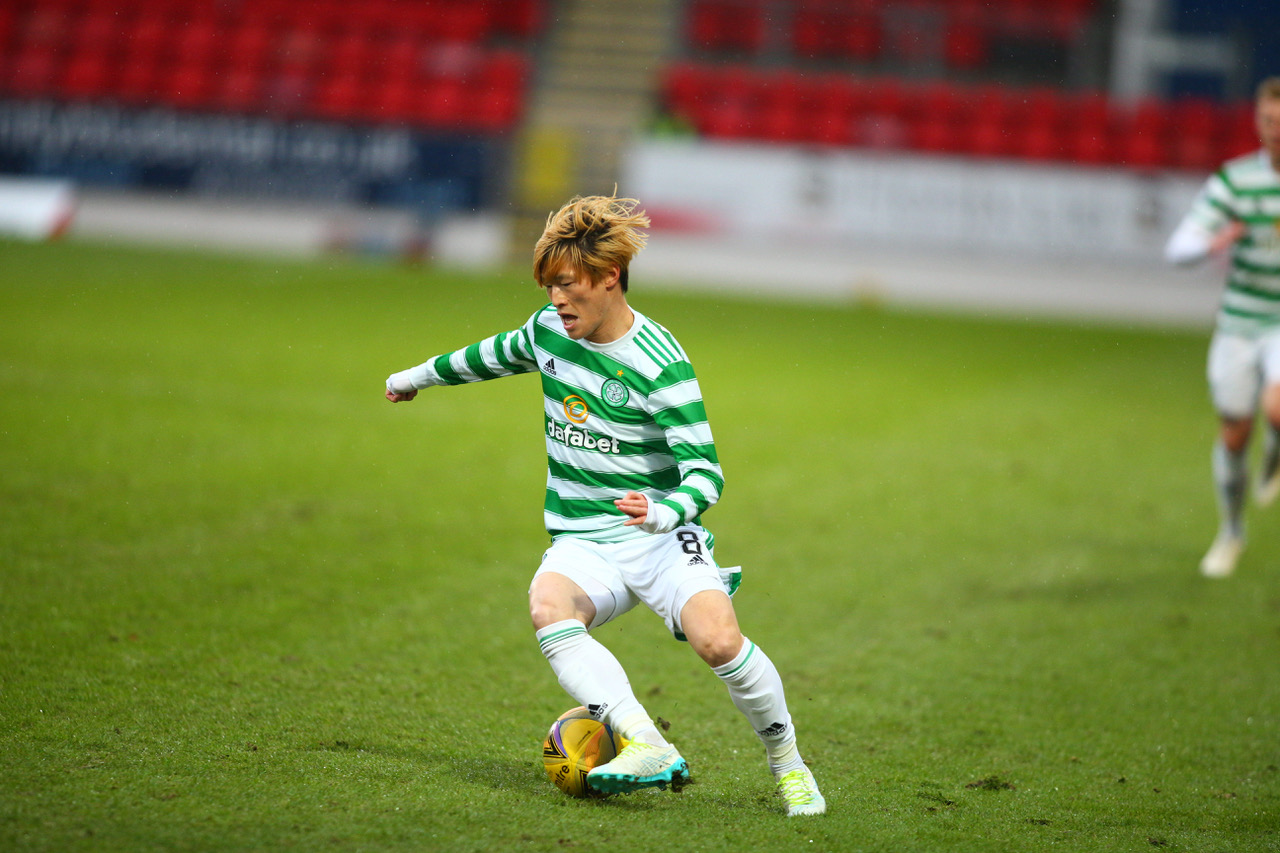 The return of Kyogo to the starting line-up was another example of Ange being willing to be optimistic when it comes to taking necessary risks, as was the somewhat frightening inclusion of Vasilis Barkas in goal.

And although Kyogo left the field with a recurrence of his hamstring injury, his presence, alongside a sharp as a tack Abada up front, with Tom Rogic in the number 10 role behind them, had already seen Celtic take the lead and a strong foothold on the match – no easy task against a deep lying defensive opposition and on a tattie field of a pitch. And in fairness the other gamble of Barkas between the sticks paid off, as what the Greek shot stopper had to deal with, he did so relatively comfortably. 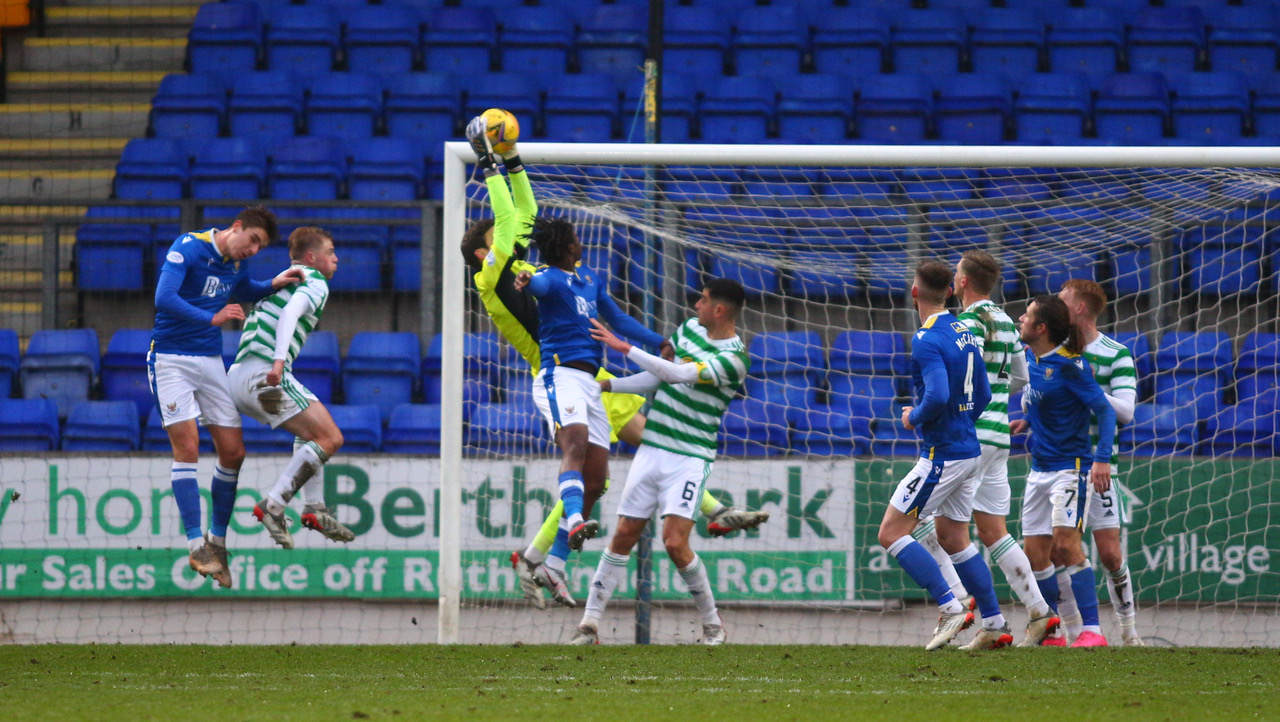 The goal when it came was well delivered from Josip Juranovic’s cross, who had a fine game. And although Abada’s initial effort was well saved by the impressive Elliot Parish in the Saints goal, the diminutive striker showed the bravery on and off the ball he exhibited all afternoon to beat the Saints defence and the ‘keeper to the rebound and head home.

The second when it came, after Joey Dawson replaced Kyogo for his debut in the Hoops, was the result of another who stepped up to the mark today, after a quiet one in Paisley on Wednesday night. This time Tom Rogic supplied the ammunition and Abada once again showed a striker’s instinct to finish past Parish. 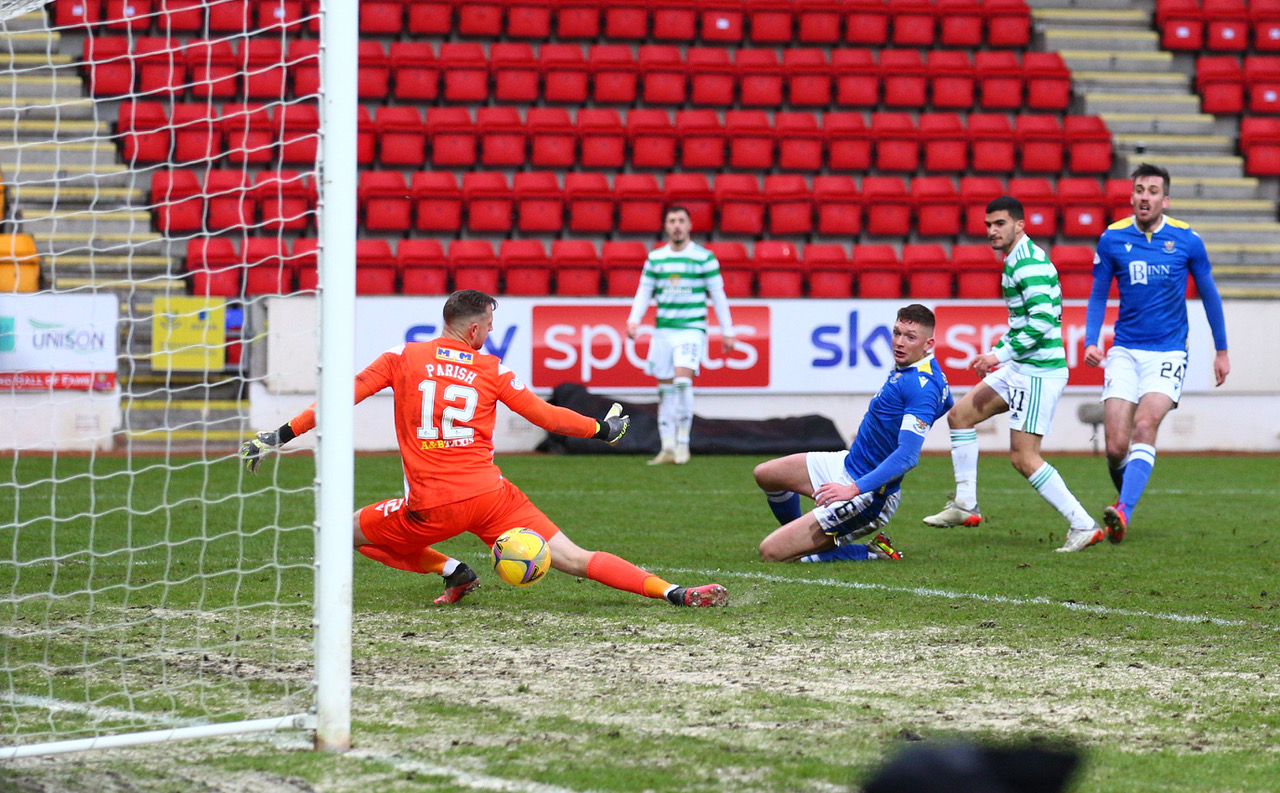 St Johnstone versus Celtic; Liel Abada of Celtic makes it 2-0 in the 22nd minute

In truth Abada could have had at least four goals today, such was Celtic’s dominance, but everyone in green and white was happy to settle for a two-goal cushion at the break.

But when it comes to Celtic, we don’t make things easy for ourselves, and halfway through the second half Saints Sub Chris Kane scored with a superb header, though the opportunity arose on the back of a slack pass from the back, from the up to that point steady Carl Starfelt, who then went into a period of overthinking every time the ball came close to him.

In the end the Saints reply was enough to awaken the Hoops from a period of slumber and the two-goal cushion was restored late on when Nir Bitton, captain for the day and superb throughout, struck a fine finish low past Parish and just inside the ‘keeper’s post. 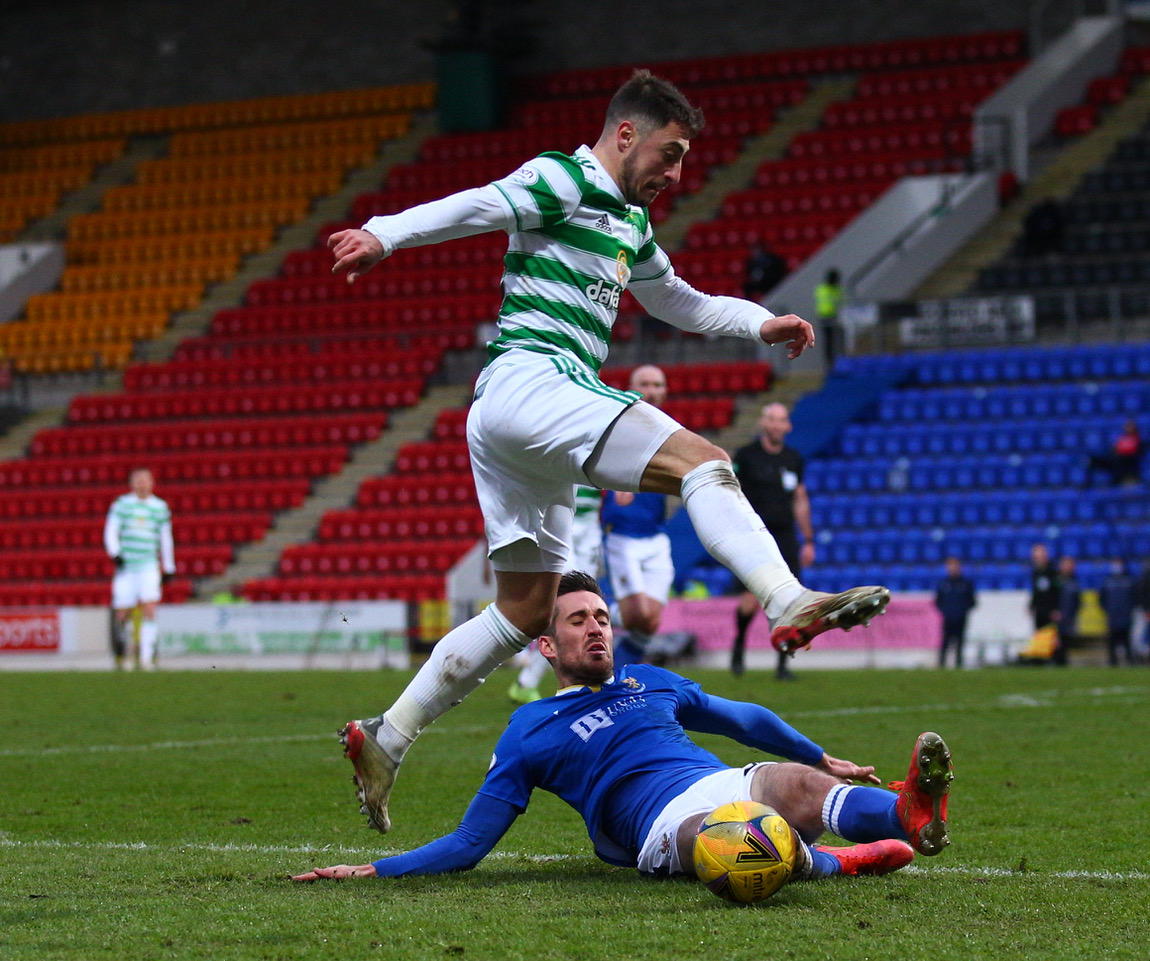 Juranovic on the attack For Celtic

This was a vital three points for Celtic as football closes early for the winter break, and another ascent made in a mountain of challenges Ange Postecoglou has had to deal with in the first six months of his time as Celtic manager.

Postecoglou will now look to Michael Nicholson to supply him with not only reinforcements but also first team oven ready stars upon which he can rely on, rather than having to fill the bench with players who haven’t even made a B team, never mind first team, appearance this season.

A special mention has to go to the experienced players who took the field today. Carter-Vickers was once again superb at the back, Nir Bitton had his best game of the season and James McCarthy showed the level of grit and determination he’ll need to now show consistently to force his way into the team, and truly fulfil his dream of being a Celtic player. And Josip Juranovic, a player who has suffered possibly as a result of his versatility to nail down any particular position, showed he’s an incredibly valuable asset to Celtic wherever he is chosen to play. In the absence of Callum McGregor and with a period of the game where we somewhat lost our way, this leadership group certainly showed their worth. 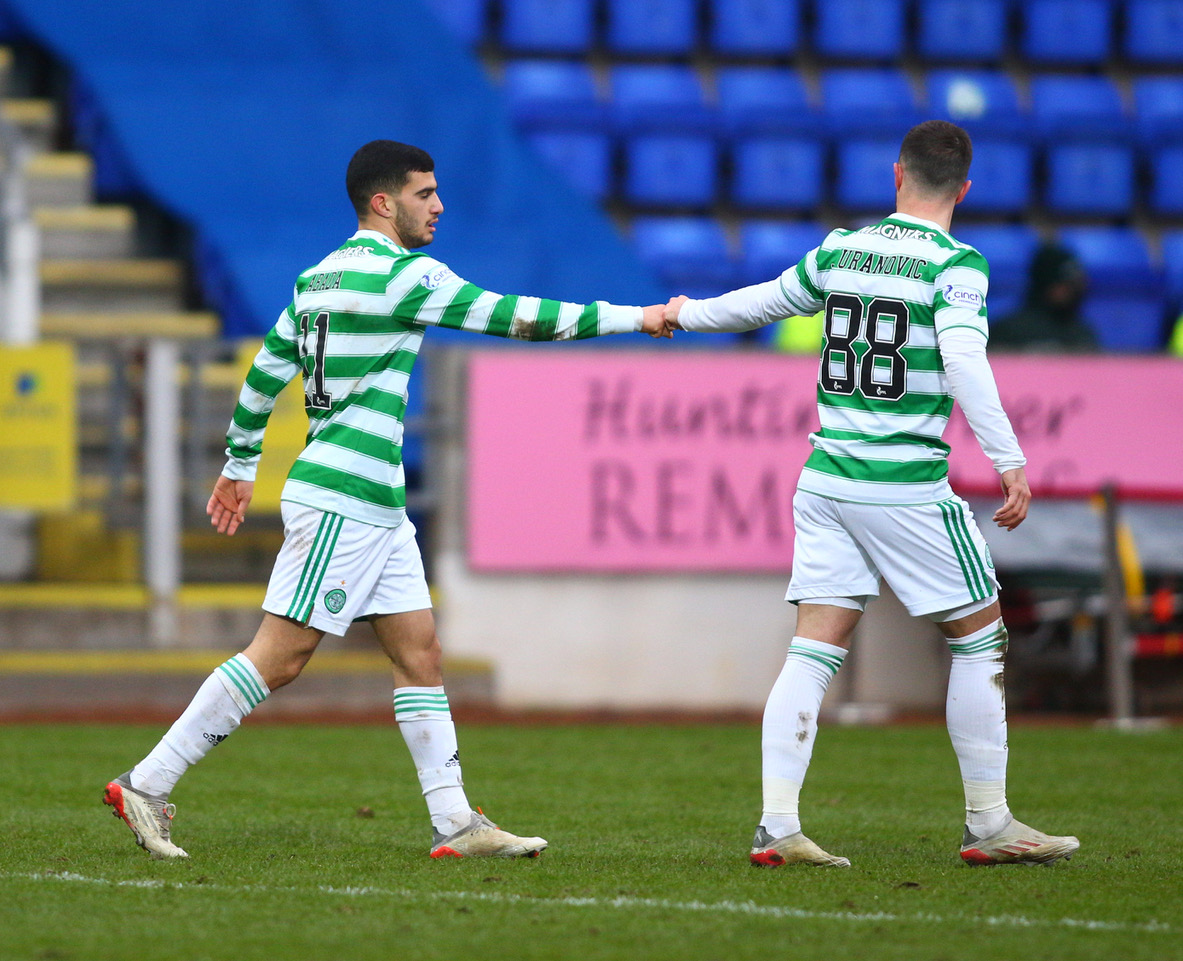 But the stars of the show were very much Celtic’s Israeli pair of Nir Bitton and the clinical Liel Abada.

With the wee man only three months older than our Academy graduate Owen Moffat, it’s asking a lot of the youngster to play so often and out of position. Today, much like his more experienced countryman, he not only performed well, he ended up being the difference maker when Celtic, down to the bare bones needed it most.

With a likely six-point gap to chase and reinforcements on the way, there is a good chance the endeavours of both our Israeli stars today have given Celtic the platform from which to take the challenge to our City rivals in the new year. That club’s own behaviour at this week’s SPFL vote gives away the fact the Ibrox club are feeling the pressure. Come the New Year they can expect it to be ramped right up!