You are at:Home»Latest»‘It is the greatest club in the world’, Moussa Dembele

MOUSSA DEMBELE has called Celtic ‘the greatest club in the world’ during an interview with Chris Sutton. The ex-Celtic striker will feature on the BT Sport documentary into the incredible 9IAR run, which will be shown tomorrow at 9:45pm.

Dembele was at Celtic for two years winning the Double Treble before a bust-up with Brendan Rodgers saw the Frenchman depart for Lyon. However, he holds the club in huge regard for giving him the platform to showcase his array of talents and still follows the club to this day.

In a snippet of Sutton’s interview, Dembele refers to Celtic as being ‘the greatest club in the world’ and credits it for maturing him as a player and as a person.

.@btsportfootball Tomorrow night 2145 BT Sport 1 Celtic’s 9-in-a-row show🍀 Hear from Neil Lennon, Scott Brown and Mikael Lustig plus ⁦@MDembele_10⁩ on his brilliant spell… here is a snippet of what Moussa had to say🏆🏆🏆🏆🏆🏆🏆🏆🏆 pic.twitter.com/D77f5ESKIb

Dembele was a fan favourite instantly with a hat-trick against Rangers at Celtic Park. He scored 51 goals in 94 appearances across the two seasons, winning six trophies during his trophy-laden spell in Glasgow. His departure left a sour taste for supporters but following Brendan Rodgers’ departure, it became clear that the Frenchman was not the issue. 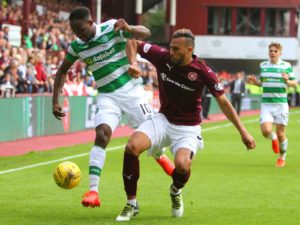 Celtic may yet benefit from Dembele’s development at Lyon by scooping a £6m sell-on fee should any rumoured move to Manchester United materialise. This would allow the club to sign his compatriot, Odsonne Edouard on an extended deal as Celtic push the record-breaking 10IAR.