You are at:Home»Founders»James McKay: The Man Who Gave Us Paradise

James McKay was another pioneer of Celtic, who was born in the Calton, in 1853. His mother was Irish and his father Scottish, with the traditional identity of Celtic Football Club being further extenuated as the family lived on Abercromby Street, just yards from St Mary’s Church.

James’ grandfather was originally from the Highlands and was part of that first wave of Scots Roman Catholics, who moved to a Catholic enclave in the Glengarry area of Bridgeton at the end of the 18th century. His son (James’ father), who was also named James, owned a barbers shop on the Gallowgate just next to the Bellgrove Hotel and James (junior) went the same way by learning to cut hair and joining the family business.

James McKay married Margaret Malley in St Mary’s Chapel in 1884. The couple had four daughters and three sons together and in a great coincidence, the wedding gave McKay a brother in law named Willie Malley. The eagle eyed among the readership will notice that this wasn’t the legendary Celtic figure, Willie Maley, whose surname adopted a single L. However, it was pronounced in the same way.

McKay was a founding father of Celtic, having been involved with the club from the beginning. This was likely due to his connections at the local church and within St Mary’s parish, where so many other men behind the establishment of Celtic spent their time. A member of the original committee, McKay became an office bearer in 1892, when at that year’s AGM, he was elected as club Treasurer. The election made perfect sense and was somewhat of a natural progression for James, as he had assisted each of the previous men in the post – Hugh Darroch, John H McLaughlin and Tom Maley. 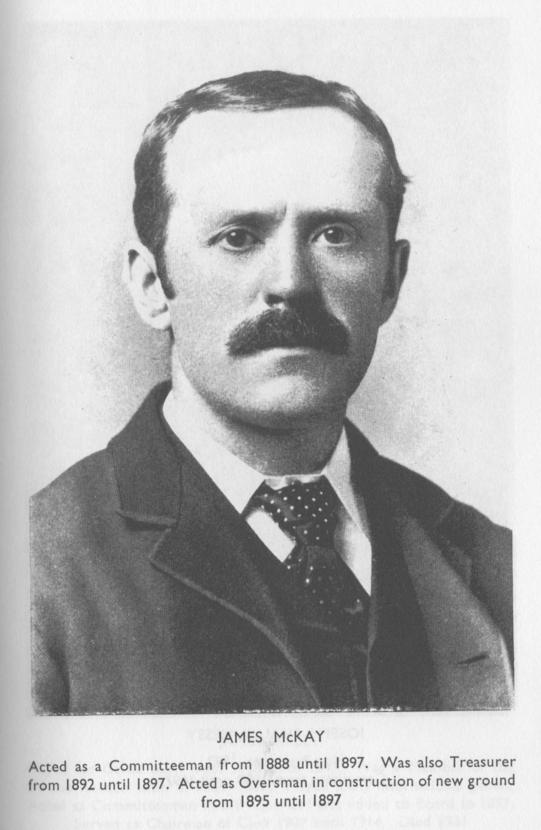 The position of Treasurer remained James McKay’s until 1897. However, he is most famously and indeed fondly remembered for his role in the construction of the new Celtic Park. The move was forced by the original landlord’s rather ubiquitous demands to raise the rent from £50 to £450 per annum. Such a huge change came as a result of the landowner spotting Celtic’s rising fortune, and whilst the new stadium may have been a necessary reaction, the committee wanted it to reflect the club’s growth, success and ambition.

Once constructed, the new Celtic Park was widely regarded as the top sporting venue in Scotland. The fact that the ground hosted so many enormous events such as the first World Track Cycling Championships and Speedway meetings ever seen in the UK stand testament to this.

So good was the new stadium that the local press described it as moving from the graveyard to Paradise, a nickname that Celtic Park holds to this day. Yet none of this would have been possible if not for several individuals, from builders to contributors and the overseer/project manager – James McKay. Appointed master of works, McKay supervised the laying of the structure. It was not an easy task, considering that £4000 was spent; the equivalent of £511,570 in today’s money. In his wisdom, McKay spent the funds on converting the disused quarry into a playing surface and erecting a new pavilion, whilst a saving was made when the stands from the original Celtic Park were lifted and put in place at Paradise.

On opening the stadium, James McKay helped to sell season tickets for seven shillings and six pence ahead of the new season. He was appointed oversman for the stadium in 1895, putting him in charge of the various upgrades to the ground. He is also the person credited with making the initial suggestion to install the double track around the pitch, which brought the club much needed profit through cycling, speedway and pedestrianism contests in the early years.

The mid 1890s saw the debate over limited liability and charity commence. However, even in the midst of this argument, James McKay was singled out for an Honorarium of £100 (£12,789 today). Shortly after receiving this money, McKay was part of the delegation sent to represent Celtic at the 1896 Irish Race Convention in Dublin.

The following April, after a sub committee was established to meet in regard to preparing the club’s conversion to a limited company, James sat on Celtic’s provisional board. When the change in status finally went ahead at the 1897 AGM, McKay was no longer part of the club’s key men and didn’t take up a seat on the board. He did remain a keen Celtic supporter and club member, getting involved with the powers at Parkhead again when it emerged that a deal for cheaper season tickets, which he brokered with Brake Club representatives as Celtic Treasurer, was no longer being honoured by the club. McKay spoke up on the Brake Clubs’ behalf, but Celtic refused to budge and he let the matter go shortly after.

James McKay died in August 1924. A fantastic article, summarising his life, appeared in the Glasgow Observer that week:

The death of Mr. James McKay which occurred on Thursday at 189 Abercromby Street, Calton, broke another link in the chain of East End events extending from last century.

Father and son carried on a hairdresser’s business at 546 Gallowgate in the good old days when a shave cost a halfpenny, and Dr Scanlan, an old friend of the family declares that the two were very popular, and indeed, the only barbers he was acquainted with at that time who could make money at their trade.

In June of 1884 James McKay married Margaret Malley, a power loom weaver of 11 Greenvale Street. They were wed by Rev Donald Carmichael in St. Mary’s Church.

Shortly afterwards he became identified with the Celtic Football Club founded in 1887. He and the late Hugh Darroch were for many years joint treasurers of the club.

In 1905 his mother died and Mr. McKay succeeded to her business, that of chandler and tobacconist in Abercromby Street. There he carried on until the death of his wife five years ago when the shock rendered him unfit for any active work.

A family of four daughters and three sons survive. All the ladies are in Glasgow. One son is in Detroit, one in Dublin and the other carries on the business in Abercromby Street.

To them and to Mr. McKay’s many other sorrowing relatives and friends we extend our sincere sympathy.

Previous ArticleCeltic announce Salary Cuts for Players, Management and Directors
Next Article Everyone at Celtic is now in it together, SPFL latest, one vote away from a Good Friday