You are at:Home»Jim's Diary»Jim Craig – After a 5-0 win paper says ‘Celtic Fail to Impress as They Progress’

Thanks to Morten Wieghorst, Tommy Johnson and Andy Thom, Celtic got off to a fine start in the first match of season 1997/98, an away UEFA Cup Preliminary Qualifier 1st Round 1st leg tie against Inter Tel from Cardiff on 23 July.

And on this day in 1997, it was Andy Thom who opened the scoring from the penalty spot when the teams met again at Celtic Park in the return leg, after Simon Donnelly had been tripped in the box.

Celtic got two more before the interval. A fine free-kick by Tosh McKinlay let Tommy Johnson score his first goal for the club and just on half-time, Johnson scored again, this time from a Darren Jackson cross from the right. 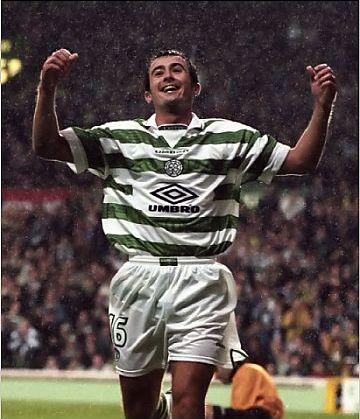 In 62 minutes, David Hannah got on the end of an Andy Thom cut-back for the fourth, with the 5th arriving just five minutes from time, when Chris Hay knocked in an Andy Thom cross.

So, 5-0 on the night, 8-0 on aggregate but the watching journalists were not particularly impressed , as could be guessed from this headline in one of the following day’s evening papers –

‘Celtic Fail to Impress as They Progress’

Previous ArticleSickening scenes as Scotland’s Shame battle with Wigan fans in Glasgow City Centre
Next Article ‘The pressure is on me to score more goals,’ Forrest