You are at:Home»Jim's Diary»Jim Craig – A goal for Celtic on his debut for Japanese midfielder Koki Mizuno

The Celtic players were in the yellow strip as they ran out in the Falkirk Stadium to face the Bairns in a Premier League match on this day in 2008.

During the previous few days, there had been some trouble behind the scenes.

After a pretty public spat between Gordon Strachan and Aiden McGeady, the winger had been banned for two matches, so he was out.

Bobo Balde had been in the press complaining about the way he was being treated, so he also was out with Darren O’Dea back.

Paul Hartley was out with an illness. And in the starting line-up for his debut was the Japanese midfielder Mizuno. 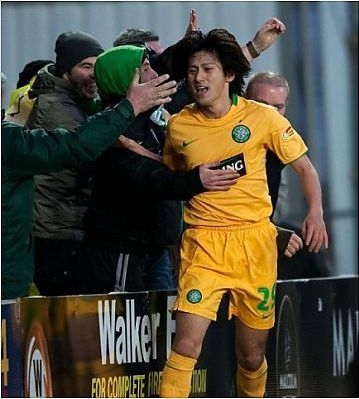 The full team was Boruc, Hinkel, Naylor, Caldwell, O’Dea, Loovens, Brown, Nakamura, Mizuno, Samaras and McDonald; and by the interval, the Falkirk side had managed to contain the Hoops, so the score was 0-0.

Within three minutes of the re-start, though, Samaras put Celtic ahead and the visiting side began to dominate the play.

The Hoops fans, though, had to wait till near the end to see any further goals, with Mizuno and McDonald both scoring in the final minute to give Celtic a 3-0 win. Watch the debut Bhoy’s goal below…

Felix O’Neill, who was born on this day in 1889, joined Celtic from Shotts United early in 1911 and only made one appearance in the hooped shirt, at right-half in a 1-1 draw in a league match against St Mirren on 18 March of that year.