You are at:Home»Jim's Diary»Jim Craig – Celtic’s last ever trip to play Third Lanark

On this day in 1964, although they did know it at the time, a Celtic eleven travelled across the city to Cathkin for the last-ever league meeting against Third Lanark at that ground.

Cathkin had hosted two Scottish Cup finals (1882, 1886) and it had been a good venue for Celtic in the past.

On that day in 1964, the Third Lanark players – and their dedicated fans – must have been quite apprehensive as their side was down at the foot of the table, scoring an average of a goal every two games while losing four every match.

And they did not get any comfort from the play that day, either, as Celtic won 3-0. The side was Simpson, Young, Gemmell, Murdoch, McNeill, Kennedy, Johnstone, Gallagher, Hughes, Maxwell and Lennox.

Between the posts for the Hi Hi that day was Evan Williams, who later in his career took over from Ronnie Simpson in the Celtic goal. 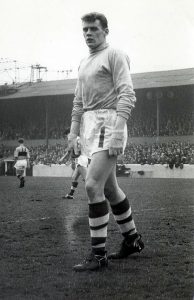 And talking of another goalkeeper, Many Happy Returns to Frank Haffey, born on this day at Glasgow in 1938.