Speedy outside-left Davie Hamilton joined Celtic from Cambuslang Hibs in April 1902 and from that point on, he played his part in all the big Celtic moments of the following ten years, like the British Exhibition Cup win of 1902, when Celtic beat Rangers 3-2 at Cathkin, the six-in a –row championship successes between 1905 and 1910 – a Scottish record until another Celtic side surpassed it in the late 60s and early 70s -plus the Scottish Cup wins of 1904, 1908 and 1911.

Davie was in a forward line that ranks up there with the best that Celtic has ever produced, the names readily dripping off the tongues of fans of that time, outside-right Alec Bennett; inside-right Jimmy McMenemy; centre-forward Jimmy Quinn; inside-left Peter Somers; and outside-left Davie Hamilton. 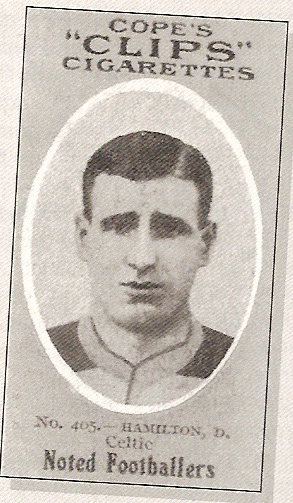 Willie Cook was a Northern Ireland international right-back and played for Celtic from 1930 to 1932, making 110 appearances in total.

Willie had been born in Coleraine on this day in 1910 but had come over to Scotland to start his football career with Part Glasgow Juniors before joining the Hoops.