You are at:Home»Jim's Diary»Jim Craig – From Celtic Star to the club’s maintenance electrician

Johnny Bonnar had become the regular custodian, behind a full-back pairing of Sean Fallon on the right and Frank Meechan on the left.

Jimmy Mallan was the stopper at centre-half, flanked by Bobby Evans and Joe Baillie and the forward line usually read Jock Weir, Bobby Collins, John McPhail, Bertie Peacock and Charlie Tully, although there was a fair bit of movement between the various positions.

On this day, in 1950, ten of that side ran out at Parkhead to face Hearts in a league match.

The one missing was the injured John McPhail and to replace Big Hookey, the manager had decided on John McAlindon, who had joined Celtic from Penrith Amateurs two years before.

The 20-year-old did well, scoring twice from chances laid on by Charlie Tully, as Celtic drew 2-2 with the Jam Tarts. It was a wonderful start for John McAlindon, just the sort of dream debut that fitted in nicely with the festive time of year and got his Celtic career off to the best possible start.

And when I signed for Celtic in January 1965, do you know that John McAlindon was still at Parkhead, by then working as the club’s maintenance electrician!

John is pictured above with Fergus McCann. 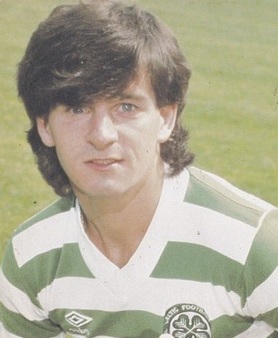 Many Happy Returns to Charlie Nicholas, born on this day in 1961.

Previous ArticleIbrox, here comes Brendan’s Waterloo
Next Article Beaton and Morelos give Lawwell a chance to justify the £2m bonus he gets tomorrow