You are at:Home»Jim's Diary»Jim Craig – a penalty shoot-out with PSV Eindhoven

On this day in 1997, Celtic drew 2-2 with PSV Eindhoven in the play-off for 3rd place at the Irish International Soccer Tournament at Lansdowne Road in Dublin.

In their previous match, Celtic had been beaten 3-2 by Irish part-timers Derry City, a result which was not to the liking of the Hoops support or indeed the new manager Wim Jansen, only days into the post.

One or two players had picked up knocks in that match, so, for the contest with the Dutch side, the new Boss made some changes, putting out a side of Marshall, Boyd, McKinlay, MacNamara, Mackay, Wieghorst, Di Canio, Hannah, Donnelly, Thom and Gray. 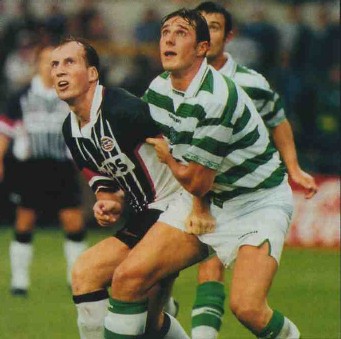 Celtic were 2-up approaching half-time – through Wieghorst and Mackay – but De Bilde pulled one back just before the break and then late in the match, the striker got the equaliser.

There was no extra-time so the match immediately went to penalties.

Donnelly, Di Canio and Gray all found the net for Celtic but after substitute McBride’s penalty was saved, one of PSVís subs – Zenden – struck the winner.