You are at:Home»Jim's Diary»Jim Craig – Stubbs and Larsson score at Ibrox in 2-2 draw

A crowd of 50,059 had gathered at Ibrox for the New Year derby, the final match before the first-ever mid-winter break in Scottish football.

There appeared to be some goings-on behind the scenes at Celtic Park. Simon Donnelly had been put on the transfer list; Croatia Zagreb were now apparently demanding interest as well as the £3 million fee for Mark Viduka; and the club seemed to be interested in the Dutch striker Erik Meijer, currently with Bayer Leverkusen. 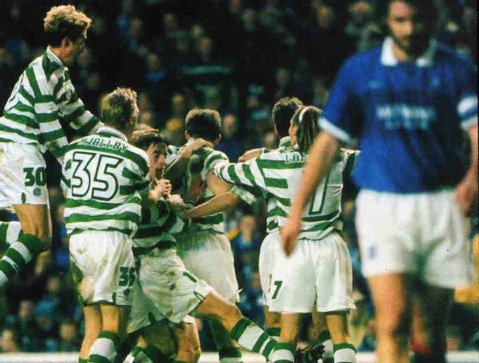 On that afternoon in Glasgow in 1999, the Celtic side fielded by Jo Venglos was Gould, Boyd, Mahe, McNamara, Stubbs, Larsson, O’Donnell, Lambert, Moravcik, Riseth, Mjallby; and they got the first goal in 39 minutes when Alan Stubbs fired home. On the stroke of half-time, Amato made it 1-1. Shortly after the break, Henrik Larsson put the Hoops ahead 2-1 but just as the Celtic fans were sensing victory, up popped Wallace for the equaliser and the match finished 2-2.

John Coleman – born at Cardross in 1870 – joined Celtic in 1888 and went on to make 18 appearances at outside-left over the following five years, scoring 3 goals, before ending up as reserve team trainer in November 1895.

Previous ArticleCeltic and the World Cup – Sweden 1958
Next Article ‘A new contract? Not an option. We are not even talking,’ Boyata’s awful agent