You are at:Home»Jim's Diary»Jim Craig’s 7am start: Lubo gets the party started

A crowd of 59,298 was present at Celtic Park on this day in 2001 to see the team presented with the League Championship trophy after the match against Hearts, which the Hoops won 1-0. The title had actually been secured a couple of weeks previously against St Mirren but the players had to wait until the end of the last night’s match before seeing the prize they had all coveted. 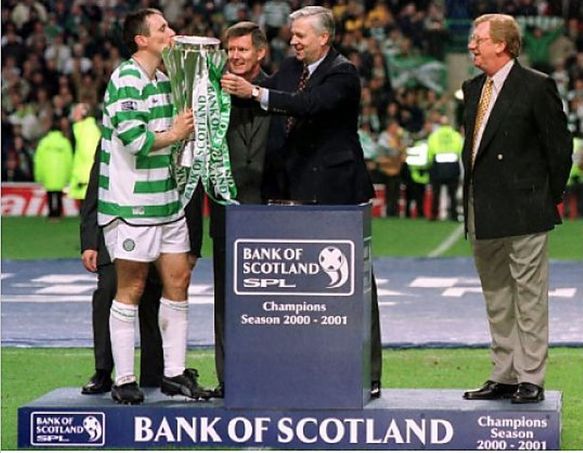 The Celtic team on the night was Douglas, Vega, Mjallby, Valgaeren, Agathe, McNamara, Healey, Lambert, Thompson, Larsson and Johnson. Hearts worked hard to keep Celtic under control in their own half for the whole of the match but seldom crossed the halfway line with any attacking intent themselves.

The only goal of the match came in the 68th minute, when Moravcik, on as a substitute for Healey, swept home a cross by Larsson.

The League Championship was the second of the major trophies in Scotland that Celtic had won that season and they would go on to complete the ‘treble’ against Hibs in the Scottish Cup final.

Previous ArticleDéja Vu? On you bike! Bouncing back from capital punishment, why it’s Broony’s
Next Article ‘My Celtic stars,’ Brendan names this season’s his top three performers