Jim Goodwin has told Celtic to sign one of his star players, Jamie McGrath. The Irish midfielder has been one of St Mirren’s best players this season and was instrumental in beating Celtic at Parkhead at the beginning of the year. However, Goodwin believes that the 24-year-old is good enough to make it at the top team in the country.

As reported by The Sun, the Saints boss said that he wouldn’t want to lose the player but couldn’t stand in his way if he went to a bigger club.

“For me, Jamie McGrath is a Celtic player. I look at some of the lads who are there now, like David Turnbull, Callum McGregor and Ryan Christie.

“I can see Jamie being among that level. I don’t want him leaving and going down to League One in England because they might double his money.

“If he’s going to leave I want it to be a top club that’s going to compete and win things, and help him progress and take his game to the next level. 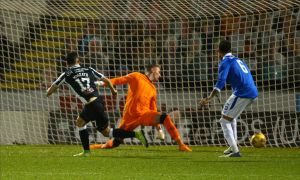 “Jamie’s a very intelligent and level-headed young man, and he won’t be influenced by the first decent offer.

“It won’t be all down to finances. He will have a look at what his options are, and if he believes staying at St Mirren is best for him I’ve no doubt that’s what he’ll do.

“He’s got an inner belief and knows how good he’s capable of being. He’s by no means the finished article.

“He’s at a great age, two or three years before he hits his prime.”

The player has just twelve months remaining on his contract having signed from Dundalk in January 2020, meaning Celtic could likely pick up a bargain if they believed that the player could play a part in the next campaign.

Celtic will undertake an enormous rebuilding job in the summer under a new manager, new CEO Dominic McKay and likely a number of new players. McGrath has been impressive this year with The Buddies looking for a 7th place finish as well as two Cup Semi-Finals; however, he may look to make a move in his career and where better to go than Paradise.

Having played 42 times this year, McGrath has scored 15 and assisted 5 times. These figures are impressive for a St Mirren player, especially one that has been in the SPFL for just over a year.