Callum McGregor exacerbated Celtic’s problems at Ibrox on Sunday. The Scottish midfield was shown two yellow cards within the space of a few minutes as he was given his marching orders in a game that encapsulated all of Celtic’s issues this season, poor finishing, woeful defending, bad decision making and average goalkeeping. However, former Celtic midfielder John Collins believes that McGregor is the man to build the team around next season as the Parkhead side plot revenge.

Collins believes, as reported by The Evening Times,  that the new manager will likely want to keep McGregor at the club and do not need to sell him due to his long contract with the club, something that cannot be said for some of his teammates.

“I would imagine the last player the new manager would want to leave the club would be Callum McGregor, that’s for sure.

“I know Callum very well. He is a Celtic supporter and has been a consistent performer year after year.

“I think he’s one the new manager will be desperate to keep hold of. He’s got a long contract so there’s no need to sell him due to a contract rolling down.”

McGregor is the heir-apparent to Scott Brown as Celtic captain and Collins believes that he is capable of stepping into that role on a permanent basis; however, he is not like Brown as a captain, who roars his teammates on, McGregor leads by example. 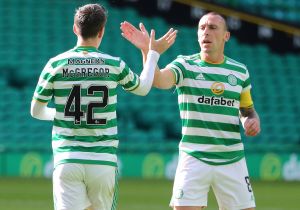 “I’ve got to be honest. Callum is a quiet, reserved young man.

“His leadership is in performance. He performs like a leader consistently but he is not a huge talker or shouter or motivator.

“He can be a captain, but I wouldn’t class Callum as a natural leader or spokesperson. I’d class him as a top-class football player and a good role model for every player in the academy.”

McGregor should be one of the main components in any new team devised by the incoming manager, likely to be Eddie Howe. If the new manager can capture his performance levels over the last few years then he is sure to reap the rewards of a tireless, goalscoring midfielder.