Although Yogi was no longer at Celtic Park us St Pats bhoys were still enjoying his hospitality.

I first entered Yogi’s Bar on the evening of my last day at St Pat’s. To celebrate our leaving a large number of (now former) pupils met up in the Cross Keys in Sunnyside. Some of us had actually being going there on Friday evenings for a few weeks already, attracted by the large alcove near the door where we could gather out of sight of the bar staff and most of the patrons, and also the liberal interpretation of the age factor that the management appeared to have. 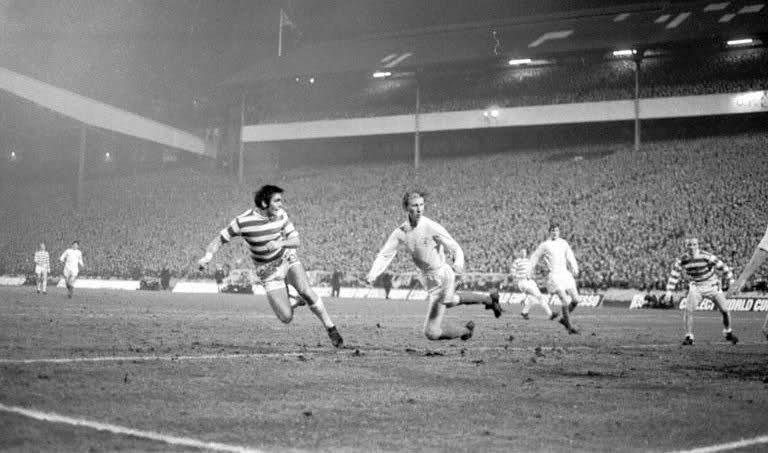 On that night a group of us decided that now we were no longer schoolboys we should venture into the wider drinking world and decided to do a pub crawl. After trying the likes of the Forrester’s Arms and the Fountain Bar several of us found ourselves pushing open the swing doors of a pub in Canal Street – formerly the Red Lion, now Yogi’s Bar. As a novice drinker at this point my choice of drink was quite limited. I generally copied the mates who seemed more educated in these matters than me and my drinks menu vocabulary was limited to pints of heavy or pints of lager.

As long as the taste was reasonable and the drink was cool and felt refreshing I was content enough. That changed that night in Yogi’s. I was enjoying the amber liquid that I was now consuming so much that when it was suggested that we take the next leg of the crawl round to Duncan’s I opted to stay put. I noticed that there were 2 taps dispensing this amber liquid.

One with the name Tennents, the other was titled Harp. I was sure the pint I was drinking had been poured from the latter tap so ordered another. And so began a love affair that would last several decades (At this stage I should apologise to the companions who travelled with me the next 6 years or so following the Bhoys all over Scotland. After away games we always liked to take the opportunity to have a pint in a local hostelry. For the rest of the guys that was simple. Just stop at the next pub and give it a try. With me however it was a bit more complicated. It had to be a Scottish & Newcastle shop in order to be sure that Harp would be available!)

The following Friday evening I was back in Yogi’s with a few of my former school mates. The numbers grew rapidly over the folowing Fridays and soon we were regulars in the small pub. It would be kind to say that the pub was basic. As you opened the main front door a half-glazed pair of swing doors faced you. Immediately to the right was another door that opened into a small space at the far end of the bar. This area was used for off-sales although sometimes a visitor would pop on there for a more private chat with one of the staff.

Pushing through the swing doors brought you into the main part of the pub. The L shaped bar was to the right. The wall on the left was once covered with large mirrors of the classic pub type. However I gather they were sold to an American and thereafter only the bare wall remained. At the far end of this area was a small room entered by a sliding door. There was a table in the middle with benches either side. To the left of this room was the toilet. This was small room with a trough. I think there may have been a small hand basin but to be honest I am not sure. If a patron required the services of anything more than a urinal then arrangements had to be made with the Circle Bar next door.

To the right of the main bar area was a passageway that led down to 2 rooms. These were bigger than the one in the front area, especially the one at the end of the corridor. In these rooms were some tables and some seats as well as bench seating against the walls.

In the rooms there were buttons for ringing a bell that brought one of the bar staff down to the room to take your order, although on busy nights we opted for going to the bar ourselves. Those were carefree days for us. On a Friday night I could go over to Yogi’s with a one-pound note in my pocket knowing that I had sufficient funds to get 8 pints of lager and still have enough change to get some chips if I fancied, and the bus fare home. Often though I would walk home. Along with several others I would walk along the Main Street towards Coatdyke. At Jackson Street some of the guys would continue east while the rest of us walked down towards Whifflet.

The numbers dwindled there with the likes of Andy Bradley and Jim Harte heading along Calder Street to Greenend. By the time we got to the far end of Shawhead there was only Tom Tumilty and myself left. Tom would say his good bye there and I would continue over the flyover and down North Road to Bellshill.