Joseph F McGroary was born in Glasgow on 25 February 1865. He was one of 13 children and his parents hailed from Mountcharles in Donegal. As with many other founding fathers, Joseph was taught by the Marists at St Mungo’s Academy and at St Aloysius College under the tutorship of the Jesuits. Whilst at St Aloysius, McGroary studied alongside Celtic founding father, John H McLaughlin and appeared in shows with him.

Upon leaving education, McGroary met another Celtic founding father in the form of Joseph Shaughnessy, with whom he commenced a law apprenticeship in 1880. Mid-way through learning the trade, Joseph attended Glasgow University for a couple of terms before returning to Shaughnessy’s Hope Street practice as a fully qualified lawyer in May 1887.

Life as a pupil wasn’t easy for McGroary. Indeed, his family returned to Mountcharles when he was just 12 years old, leaving himself and his father behind in Glasgow. The reason for this is not known, however, he remained a frequent visitor to Donegal and met the love of his life, Catherine Cannon, from Drumkeelan on a trip to Ulster. The pair married in Mountcharles on 12 August 1888, then lived together in Joseph’s Glasgow home, before having six children.

Unlike the other founding members of the club, McGroary didn’t live in the East End of Glasgow, nor did he have any immediate connection with that part of the city. Instead, he was a prominent member of St Joseph’s parish on North Woodside Road. Nevertheless, when a conglomeration of Glasgow Irishmen, including his boss Joseph Shaughnessy, were holding preliminary meetings to establish a football club for the benefit of the local impoverished Irish community, McGroary became involved. He would also have been drawn to the project through his meetings with other founding fathers, who he had met through his membership with the Irish National League and as a representative for St Aloysius within the Glasgow Catholic Union.

After the famous meeting on 7 November 1887, in which a new Irish Catholic football club was officially constituted, McGroary was elected onto the first Celtic committee. Newspaper reports of the time confirm that he was present at the opening of Celtic Park, alongside his boss, on 15 May 1888. He witnessed many of the club’s early events and is among the committee members famously pictured with the star studded Celtic squad, who played Blackburn Rovers in October 1889. 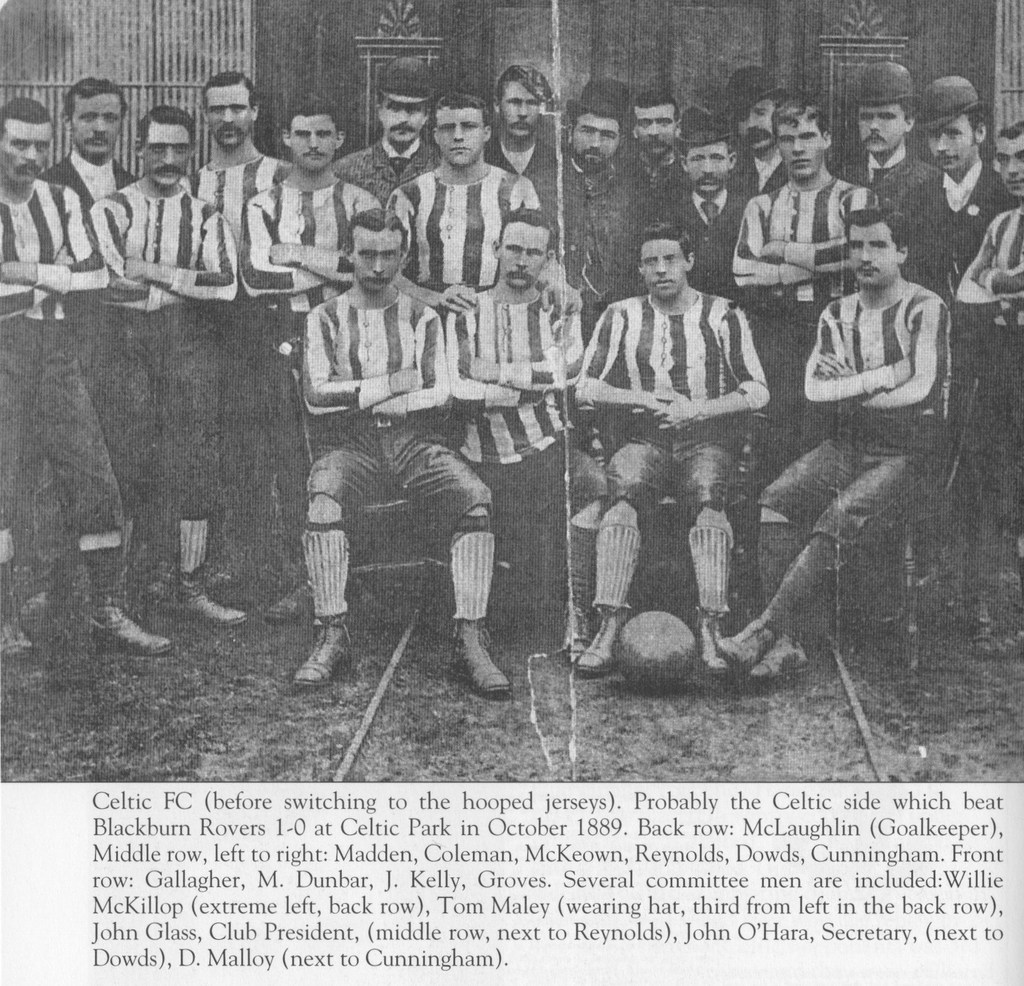 McGroary doesn’t appear as a member of the club’s committee after that first season, until the AGM in 1895. Held on Tuesday 4 June, the AGM took place in Annfield Halls on the Gallowgate (where the Bellgrove Hotel stands today). The meeting saw McGroary re-elected and he wasted no time in voicing his opinions. McGroary addressed those present at that same meeting, remarking that he felt the West End of Glasgow should also get a portion of any money distributed to charity as the club was supported by people in all areas of Glasgow, not just those within the three chosen parishes in the east of the city.

It was during this period that Joseph McGroary came to the fore in discussions surrounding Celtic’s future as a charity or a limited company. At a meeting in late 1895, McGroary stated that the club had spent nearly £5000 on the ground during the years 1891 to 1894, and that they were going to spend a further £800 to enlarge Celtic Park. John H McLaughlin contested those comments, claiming that the figures given were entirely erroneous. Regardless, it was clear from an early stage, that he was against the business route and pointed out that the club had made great progress every year. When costs started to rise, he is reported as saying that despite having a bigger balance in years gone by there was no doubt that Celtic was rapidly progressing. He then read out a number of the past balance sheets of the club in an attempt to convince his peers that there was no need to change the status of Celtic.

Before the issue reached its peak, McGroary took part in a number of other aspects of the club. In February 1896, he attended the annual Celtic Brake Club reunion. Meanwhile, in September that same year, Joseph was among the official Celtic delegation sent to represent the club at the Irish Race Convention, which was a national event organised to campaign for Irish Home Rule. He was also representing the Thomas Davis branch of the Irish National League that day.

Eventually, the infamous battle for the soul of the club would need to rear its ugly head once more. Most who wished to preserve Celtic’s charitable ideals deserted the club upon defeat. However, McGroary was willing to admit defeat and begrudgingly accepted the new direction of the club.

A meeting was arranged in St Mary’s Church Hall on 18 February 1897. Its purpose was to discuss the proposal to make a new cement cycle track at Celtic Park as the renovations would be required to meet the standards necessary for Paradise to host the World Track Cycling Championships later that year. Believe it or not, the funds required to construct the renovations led to discussion surrounding limited liability and played a huge part in the ultimate direction of Celtic. The outcome of the debate was that a sub committee should be appointed to attend another meeting the following Thursday with the purpose of putting a plan in place to turn the club into a limited company. Among those appointed were: John Glass, Willie Maley, Tom Maley, Joseph Shaughnessy, John H McLaughlin, Michael Hughes, Michael Dunbar, James McKay, Frank Havlin and a certain Joseph McGroary.

By 1900, trouble with the courts had caught up with McGroary. He was sued by Alexander Porteous for ‘salary as his clerk and for sums alleged to have been advanced by pursuer in connection with certain betting transactions’, according to the report in the Glasgow Herald it on 2 November 1897.

The case had began in January that year and went on for some time. The newspapers of the time highlight the pleadings of the case as it developed, but there is no definitive outcome shown. However, one can deduce the case did damage to McGroary, who emigrated to the USA at this time, leaving behind his wife and children, who returned to Donegal!

The betting scandal may have led to McGroary being struck off and forced to leave, or perhaps he chose to escape the stress of Glasgow with all that was surrounding him. Regardless, he settled in Brooklyn, lodging in a family’s house and working as a packer in New York.

Whilst living in the Big Apple, McGroary’s niece, Mary Harley, was shot dead by the Black and Tans during a raid in Mountcharles in February 1921. Shortly after the murder, Joseph received a graphic letter from his daughter, Gertrude McGroary (Mary Harley’s cousin), who detailed everything about the vicious attack as she had witnessed it. She also sent a similar letter to her uncle, John McGuire, who was living in Glasgow. She had hoped that her family could then contact the local press with this information to highlight the plight of the Irish and bring global attention to the brutality of the British occupation of Ireland.

Eight years later, on 22 February 1929, Joseph’s son appears in the Brooklyn Standard newspaper, which suggests that he was in trouble with local police whilst visiting his father. A puzzling family, the McGroary clan was reunited shortly after this incident, when Joseph returned to Mountcharles and moved in with his wife and children once more. Joseph saw out his remaining days with the family in South Donegal, where he died on 28 February 1937. He is buried in Frosses graveyard with a headstone marked Ogilvey McGroary.

A ceremony was held at this graveside by the Celtic Graves Society in 2013:

Previous ArticleSPFL to name Celtic Provisional Champions, but our day will come, the Rangers cash plea
Next Article Surrender or We’ll Cry