You are at:Home»Latest»Jota’s trains but Ange reckons he’s a few weeks away from playing. Contract talks to rumble on

There was news coming out of Celtic earlier today that has put a spring in the step of everyone at Celtic and simultaneously leaves a sinking feeling in the stomach of our Glasgow rivals. Jota is not only back, he is back in FULL training!

The Portuguese wide player has been an absolute sensation for Celtic both on the domestic front and his return of eight goals and six assists only tells part of the story, he’s the sort of entertainer that gets backsides of plastic seats and gives you that extra buzz when you see his name on the team sheet.

There were a multitude of differing prognosis going around when it came to Jota following his pulling up injured against Hearts at Celtic Park so it was certainly feared he’d be unavailable even after the winter break, however full training would indicate a return to the team shouldn’t be too far away and with a title charge ahead, a treble to be won and European football after Christmas, the chances of success in all those competitions goes up a notch when Jota is available for selection. 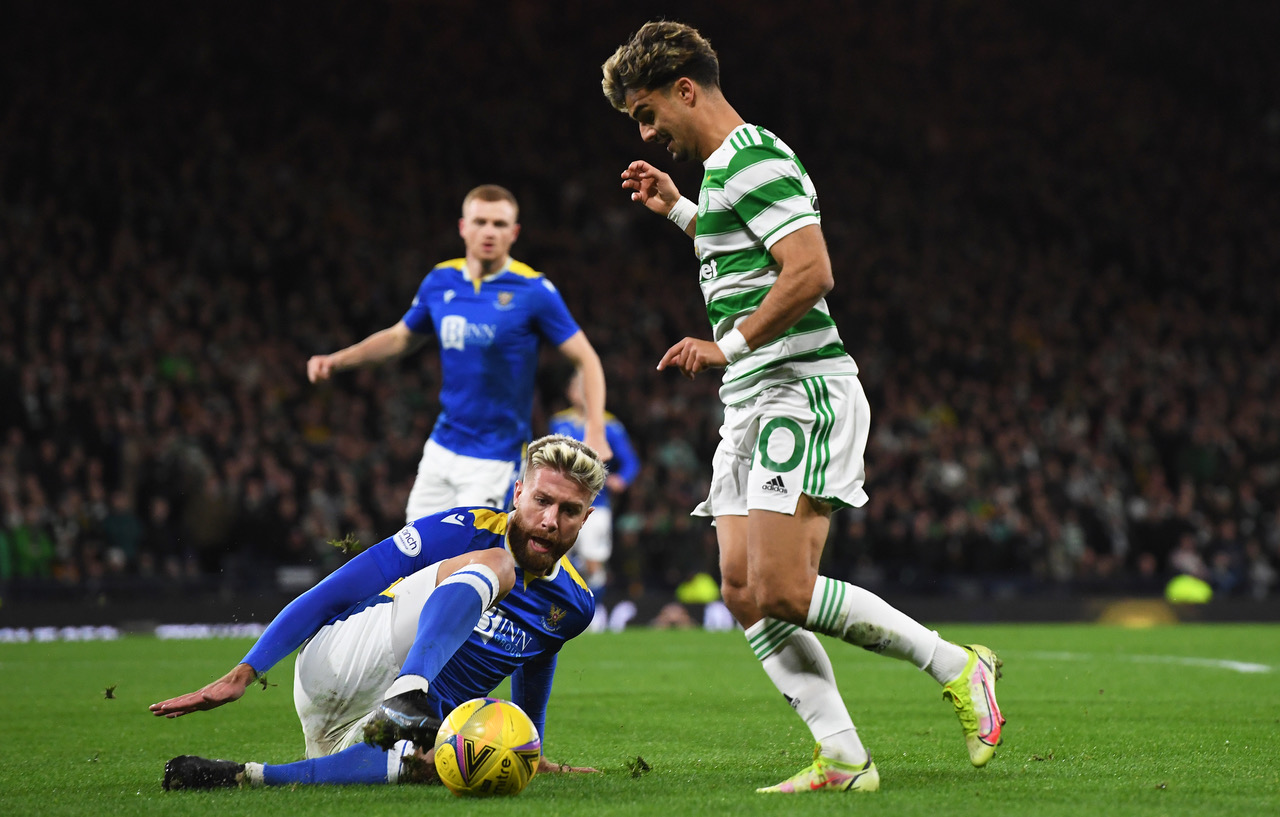 Jota of Celtic battles for possession with Shaun Rooney of Stock Johnstone during the Premier Sports Cup semi-final match between Celtic and St Johnstone at Hampden Park on November 20, 2021. (Photo by Mark Runnacles/Getty Images)

It certainly seems the earlier calling of the winter break was not only a common-sense approach to allow meaningful crowds back into football, it has also allowed the likes of Jota, as well as Christopher Jullien, James Forrest, Giorgos Giakoumakis and Karamoko Dembele all to get some initial rest, then quality training time in the legs, before we resume competitive action against Hibs on Monday night.

Whether we see Jota or any of the others as soon as that game against Hibs, be that from the start, or with the re-introduction of the Five substitution rule from the bench remains to be seen.

That one may well come too early for some but the return of Jota in particular is a real boost for Celtic and a cause for concern across the city that’s for sure particularly with a Glasgow Derby on the horizon.

After training was over both Ange Postecoglou and Greg Taylor spoke to the media, today including The Celtic Star Editor who asked the manager for a six months progress report which was duly delivered. That was after Ange gave an update ion Jota, confirming that he’s back training with the squad but stressed that Monday was unlikely and it could be a few weeks before he’s ready to return. Maybe all eyes are on the visit of theRangers as far as Jota’s comeback is concerned?

Ange Postecoglou also confirmed that there’s unlikely to be progress on the permanent transfer hopes of the support in this transfer window so that story is going to rumble on the summer by the looks of it. You can watch the media conference below.