CHRISTOPHER JULLIEN has admitted that he hopes his defensive partner Kris Ajer will ignore the interest from Serie A side AC Milan and remain at the Scottish Champions as they go for 10IAR. Despite the talents of the ball playing defender, Jullien is of the opinion that Celtic should keep their best players ahead of one of the biggest seasons in living memory.

As reported by the Scottish Sun, the Frenchman believes that the 22-year-old will go to the top of the game but he should consider the opportunity to create Scottish footballing history with Celtic before making a decision.

“Kris is a great defender, and ultimately, I think he can do everything. He runs a lot, he defends, he can take the ball into the midfield and play.

“He has so many qualities, and in the time since I arrived at Celtic, I’ve seen him progress.

“My team-mates watched him progress before that, and he is getting better. But from my time here, I just saw him get more confident day by day, and that’s good for Kris and the team. 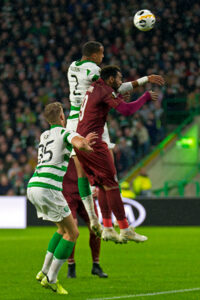 “If it was down to just me, I’d be keeping all of the best players beside me for as long as I can.

“You don’t know how football goes, but we understand each other when we are on the field and we help each other.

“I know the qualities Kris has which can make my game better, and he knows what I can do for him, so it’s really good for both of us. Just to have him on the same side as me is great and I want it more.”

Ajer joined Celtic from IK Start in 2016 for £500,000 as a midfielder; however, Brendan Rodgers retrained the youngster as a central defender. The Norwegian became a first team regular striking up a partnership with Dedryck Boyata and impressing in the centre of defence.

Ajer had struck up a formidable partnership with Christopher Jullien at the heart of the Celtic defence before Neil Lennon opted for a 3-5-2 in the second half of the season. The Norwegian has made 49 appearances in all competitions for the Scottish Champions as they won (at least) a double.