You are at:Home»Latest»Jullien on crutches now major doubt for Ibrox showdown

Christopher Jullien is a major doubt for Celtic’s trip to Ibrox on Saturday after picking up a knee injury in the 3-0 win over Dundee United yesterday. The French defender rushed towards the goal and slid in to make a goal saving clearance but was left grounded when his knee collided with the base of the post. The horror smash saw the central defender stretchered off as Lennon sweats on his availability for the game against Steven Gerrard’s Rangers.

Supporters were left disappointed as the ex-Toulouse defender, who returned to the team after a knee injury, was pictured leaving Celtic Park on crutches. 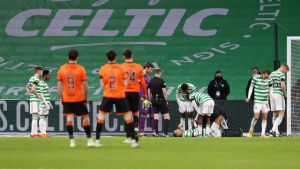 The injury to one of Celtic’s best defenders is definitely a blow ahead of the Ibrox clash. His injury may alter Lennon’s plans to utilise Kris Ajer at right back and to reintroduce Shane Duffy into the starting XI as he will now need to consider whether to use Duffy or Nir Bitton, whom replaced Jullien.

Hopefully this is just a preventative measure to protect him from aggravating the injury and he can make the game but having heard the crunch against the post, it is unlikely. Whoever replaces Jullien in the team needs to be at their best with Rangers hoping to put the league out of reach but Celtic will be hoping an inspired performance can spark a surge towards 10IAR.