You are at:Home»Latest»Just how many Shamrocks were on Celtic keeper John Mulrooney’s jersey?

In every sense of the word, John Mulrooney was an entertainer. Off the field, he was a comedian and a singer, so much so that he earned the nickname “Caruso” after the great Italian operatic tenor Enrico Caruso.

His entertaining skills were much in demand when Celtic were on their intensive midweeks away at Seamill Hydro or elsewhere, or when on tour in the summer of 1912. He had a natural comedian’s face, and he had the rare ability to wiggle his large protruding ears to the delight of children and old ladies. But he was also not a bad goalkeeper! 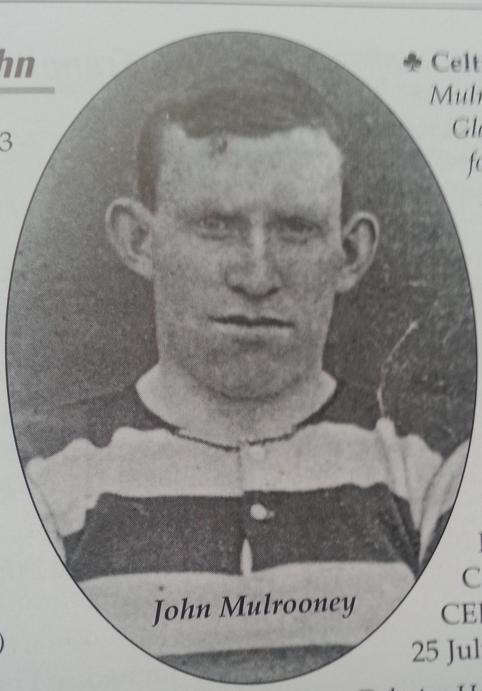 Before becoming a full time professional, he had been a miner in Lanarkshire and played junior football for Earnock Rovers. At Celtic, he was considered to be good enough to follow in the footsteps of Davy Adams, and played his first game against Queen’s Park at Hampden on 9 December 1911 (a week after Patsy Gallacher had made his debut) and impressed them well enough to keep his place all that season, including the 1912 Scottish Cup final against Clyde.

He kept a clean sheet on a very windy day and Celtic’s 2-0 victory was enough to give him a Cup winner’s medal, and to make sure that Mulrooney, McNair and Dodds entered into Celtic folklore. 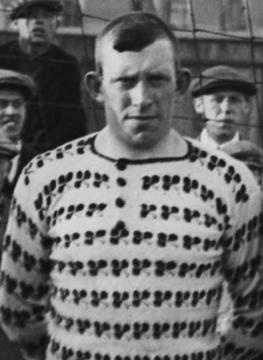 In these days, the habit of a goalkeeper wearing a separate coloured jersey was not yet mandatory, and sometimes John wore a different coloured jersey from the rest of the team and sometimes he just proudly donned the hoops. But he did wear a different jersey on the Scandinavian tour of 1912 in the game against the Norway Olympic XI. Someone had given Jimmy Quinn a woollen white jersey with shamrocks on it. Mulrooney asked if he could wear it, and Jimmy, always ready to oblige, said yes.

Season 1912/13 was not so good for John. He was blamed for some goals, and he suffered from rheumatism. When Charlie Shaw was signed in summer 1913, John had to go (Charlie was in all truth a better goalkeeper) and John found himself playing (with distinction) for St Johnstone in season 1913/14.

On Monday 27 July 1914 (when the Austro-Hungarians had already declared war on Serbia, but very few people as yet saw any need for a major World War) John Mulrooney died suddenly at his house in Hamilton. The cause was given as heart failure, a condition possibly not unconnected with his treatment for rheumatism. Those who had played with him were absolutely devastated, but he had established for himself his little corner of Celtic history.

Previous ArticleCeltic v the Rangers Match Preview – Ignore their hype, they have the same old frailties of bowing under pressure
Next Article “Celtic will win. They have great players who know what it takes,” Invincible Hero, Scotty Sinclair