You are at:Home»Latest»Just made it – Daily Record & Sunday Mail end decade with six figure circulations intact

THREE Scottish based newspapers report on their year-on-year circulation figures on a monthly basis through the Audit Bureau of Circulations (ABC). We have been keeping an eye on their decline and fall in circulation and watched on as the first of the three dropped below the psychologically significant 100,000 threshold.

That happened a while back and the poor old Sunday Post has continued to drop in circulation, now recording for December 2019 a reported figure of just 87,335 copies – a massive decline of 19% from December 2018.

There was a time when the majority of Scottish households would buy two Sunday papers every week, the Sunday Post and the Sunday Mail. The Sunday Post even holds a ‘world record’ for the newspaper that achieved the highest ‘reach’ – the percentage of the population in the country it was sold in who would buy and read each edition.

It is probably a factor that as time goes past, the older generations who read the Sunday Post are increasingly no longer with us and that in the digital age the Dundee based publishers DC Thomson have struggled to attract a younger audience. You may have noticed on social media recently that a former Celtic marketing boss has been recruited to the management team at DC Thomson and we of course wish him well in his new role. 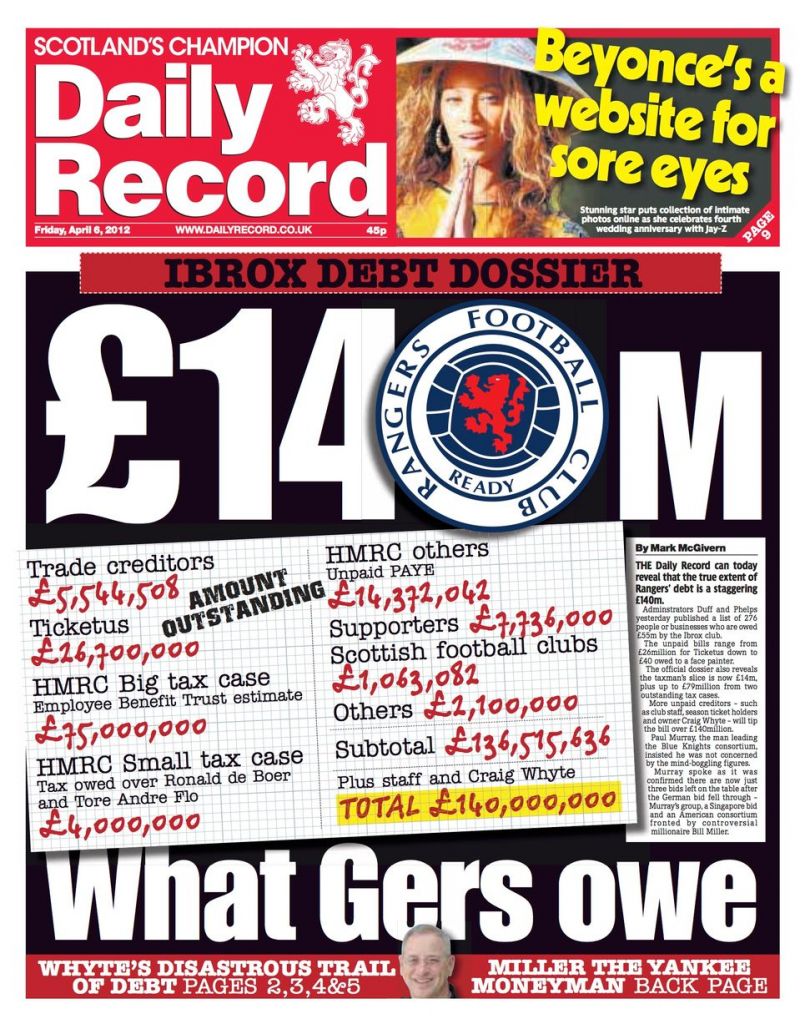 Meanwhile the two Glasgow titles, the aforementioned Sunday Mail and it’s daily sister title the Daily Record have been edging ever closer to falling below the 100k circulation level – but we can confirm that both managed to see out 2019 without suffering the indignity of dropping below the six figure circulation barrier.

The Sunday Mail lost 15% of its circulation from December 2018 and in December 2019 it reported a circulation of 103,940 copies. The figures for January 2020 could therefore see the new decade begin with the Sunday Mail selling less than 100k copies per issue if the on-going and persistent trend in their circulation drop continues.

How did Daily Record do in December 2019? Slightly better than Sunday Mail is the answer. The Record saw its year on year position drop by (just) 12% – bad, but not as bad as the 15% drop at Sunday Mail or 19% decline at Sunday Post. Daily Record now sells 104,904 copies per edition so like Sunday Mail they will be bracing themselves for the possibility – or is it a probably, even an inevitability that they too will have to report a decline to a five figure circulation for the first month of the new decade?

You can read more about how these circulation figures on Press Gazette website.

Looking at some online analysis for the two relevant websites for these papers (the Sunday Mail and Daily Record’s content is combined on the former’s website) Dailyrecord.co.uk in December 2019 had 2.5m unique visitors and the Sunday Post (sundaypost.com) had 290.7k unique visitors.

We also checked the online stats for the Evening Times which has now rebranded as Glasgow Times and their website Glasgowtimes.co.uk has 121.3k unique users in December 2019. In case you are wondering, The Evening Times (now Glasgow Times) doesn’t report on a monthly via ABC but does so as a regional title on a bi-annual basis.