You are at:Home»Latest»Karamoko Dembele expected to be announced as Ligue 1 signing

Karamoko Dembele appears to be close to being announced as a Stade Brest FC player. The 19-year-old had been tipped to be Celtic’s next big thing; however, he never really made the progress that the club and supporters had hoped and now finds himself a free agent.

According to Point Brest on Twitter, Dembele will join up with his new team on Monday and be announced shortly thereafter.

Dembele made his debut in Celtic’s win over Hearts on the final day of the 2018/19 season. However, he appeared to disappear off the radar under Neil Lennon. Dembele is believed to have asked the Irishman for more game time in the 2020/21 season and Lennon was less than impressed. Dembele has always been tipped as a superstar in the future but injuries have stalled his development and he is clearly keen on making the desired progress. 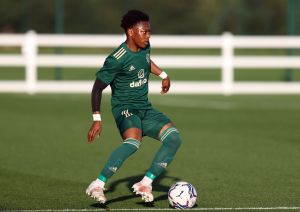 The youngster scored his first goal for the club in a win over St Johnstone towards the end of the 2020/21 season. The promising attacker came on for James Forrest in the second half and made an immediate impact, finding the net with a smart finish. Hopefully, Celtic will reap the rewards of Dembele’s obvious talents when he returns to the first team. The glimpses of Dembele have been promising and to hear that he has improved in terms of application since Ange Postecoglou has taken over from Lennon.

It would be a huge downgrade for Dembele but in the hunt for football, it is expected that the player and his advisors were honest enough with the club.