You are at:Home»Latest»Keep the faith – Elyounoussi says Forster deal is not dead

MOI ELYOUNOUSSI has told Celtic supporters to keep the faith in a deal still being done for Fraser Forster as he claims that the deal is not yet dead. Yesterday it was reported that the Englishman would remain at Southampton in order to fight for his place but it has emerged that Forster is in favour of a move, should it be a permanent one.

As reported by the Scottish Sun, Elyounoussi offered a glimmer of hope to the Celtic support as the Norwegian admitted that he was still hopeful of the Englishman returning.

“Listen, I cannot talk on Fraser’s behalf. He mentioned to me what could happen but that’s between me and him.

“All we can do is wait and see what’s going to happen, but I still hope he’s going to come back. We know what he’s capable of, he’s an amazing goalkeeper. 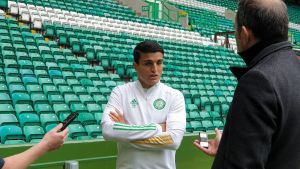 Elyounoussi sealed a loan return to the Scottish Champions earlier in the week but with that news came the bitter blow that Fraser Forster would not be returning. However, there are conflicting reports suggesting that Forster is still keen to return but only if it is on a permanent basis.

“I’m sure it’s not easy for him because Southampton have to finish their season first before he gets a chance there or not.

“I think he should get that chance, but you never know. Then he maybe needs to see what his options are.

“There is still plenty of time for him to then come back here. We’ll just have to wait and see what happens next.”

Celtic will learn their fixture schedule on Monday as preparations ramp up for the season to kick off at the beginning of August, meaning that Neil Lennon will want to have the fate of his goalkeeper spot secured well in advance of that date.

Neil Lennon’s side are reportedly discussing a move with Joe Hart’s representatives should a deal to bring Forster back to Celtic Park fail. The former Man City keeper is available on a free transfer having left Burnley last month.

Previous ArticleReport claims that Celtic talks with Plan B Joe Hart are at an advanced stage
Next Article News on Celtic’s 3 French Dates in July, ‘Partial Crowds’ at Pittodrie as Danish fans return