You are at:Home»Latest»Kenny Dalglish Predicts How Scotland’s Big Two Would Fare In A British Super League

Kenny Dalglish has stated his belief that both Celtic and Rangers would comfortably be able to compete in the top half of any new super league comprised of British teams.

The idea of Celtic and Rangers joining the English League structure was discussed multiple times from the 1980s until 2012, when the latter went bust. Many in England felt that the pair would struggle to compete, despite the fact that Celtic had performed valiantly against English clubs in Europe and had reached the UEFA Cup Final in 2003, whilst Rangers did the same in 2008. Any such assumption also ignores the important matter of money. Indeed, Scottish clubs operate on a shoe string budget compared to their English counterparts who benefit from a mega TV deal, huge prize money and multi million pound sponsorships. If Celtic and Rangers were to have a slice of that pie then they could sign much better players, whilst their worldwide supports (something often ignored down South) would add the type of merchandise and ticket revenue that most British clubs can’t come close to. They could, in effect, financially overtake many teams in England.

In a time before Sky TV deals and the huge financial disparity between the big four leagues and the rest of Europe, Celtic were one of the best teams in the world. The Hoops were the first British team to win the European Cup in 1967. They then went on to defeat Leeds United on the way to the 1970 European Cup Final and reached the Semi-Final of the tournament in 1972 and 1974. Even in the early 1980s, the Bhoys got to the European Cup Quarter-Final, beating Real Madrid in the first leg, and reached the same stage of the European Cup Winners’ Cup in 1984, before Rapid Vienna forced their way into that round at our expense by having the game replayed due to that infamous bottle incident/lie! On the other hand, Rangers reached the European Cup Winners’ Cup Final twice in the 1960s and won the tournament in 1972.

The common theme in that period was that Celtic had the biggest crowds in Britain for certain games (the 136,505 attendance at the Celtic v Leeds European Cup Semi-Final remains the largest ever crowd at a football match in Europe). Therefore, with money being self made rather than sourced from external companies, Celtic and Rangers were more powerful than many other clubs in the UK.

It is the suspicion of many that the Glasgow clubs were never invited South because if the sponsorships and TV deals were evened up, then Celtic and Rangers could become a serious threat with the power of their worldwide supports, the advantage that the famous atmosphere of their fans would provide, and the regular modern crowds of 60,000 and 50,000, respectively.

In 2021 the infamous European Super League idea came along. Its failure led to rumours of Celtic and the new Rangers being drafted into a new British League set up. Celtic remain a club with a huge fanbase, recent impressive European knockout stage experience, incredible history, and they also have the stadium and training infrastructure set up for top level football. TheRangers may not have the history that their spiritual predecessors at Ibrox did, but they do have everything else listed and now boast some silverware in the cabinet. In short, both clubs have the potential to be a big force in the game.

Talk of a British Super League has inevitably raised the discussion about how any Scottish clubs would fare. The Daily Mirror reported on the comments of Kenny Dalglish about this subject and he provided the following analysis:

“In the days since the ESL collapsed, there has been more talk of new league structures, only this time it’s not with any ESL, but a new British league set-up,” Dalglish said.

“The chat has mentioned there could be a place for Rangers and Celtic in any new structure. Now, I have no problem with that because I think the Old Firm would do really well in it.

“Given the same financial resources as many of the other clubs, I believe they’d comfortably be in the top half of any British league every season. They both have brilliant fan bases, and they would be successful. But I do think they’d need to compete to get the rewards.”

Dalglish suggested it may not be fair for Scotland’s biggest clubs to go straight into a top division without starting at the bottom of the professional set up.

He added: “I’m not sure about parachuting them straight into the English Premier League, or the Championship. Surely, they’d need to start in League Two, and work their way up through the divisions?

“People will rightly ask if that is not a contradiction of what was proposed in the setting-up of the ESL? Maybe yes, maybe no. Either way, I believe all clubs need to earn the right to success.

“We have been here before with all of this talk of the Old Firm moving to England. I honestly don’t know if the top English clubs really want Rangers and Celtic in any new set-up. It’s been mentioned for more than 20 years, but has never got off the ground. However, maybe it is going to be different this time? Maybe the winds of change are coming?” 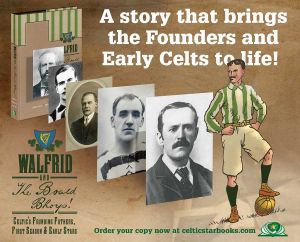 Previous ArticleVideo: “Miami Vice are on the phone Fran…”
Next Article “Nothing Close At The Moment,” Says McAvennie On Celtic’s Managerial Pursuit