Celtic will be watching closely as Kieran Tierney is once again linked with a transfer switch, which could potentially result in a multi-million-pound windfall for Ange Postecoglou’s side.

According to The Sun, City boss Pep Guardiola is keen on signing the 25-year-old as he looks to bolster his defence.

Tierney has just returned from injury but could swap London for Manchester if The English Champions pursue their interest in the left-back. Guardiola wants to strengthen at left-back with Zinchenko leaving for Arsenal and reportedly target Marc Cucurella signing for Chelsea. 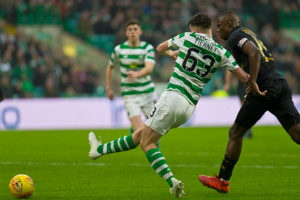 A number of clubs have been linked with a move for Tierney as he is touted to make a step away from North London to progress his career. You have to imagine that Tierney, who has made over 80 appearances for Arsenal, is worth over the £50m mark.

The left-back made over 170 appearances for Celtic, winning five league titles and three League Cups and Scottish Cups during his time whilst enjoying hero status with supporters as being ‘one of us’. The former Celtic defender left the Scottish Champions in the summer of 2019 for a fee in the region of £25m, becoming the most expensive Scottish export.

Celtic will, as they always have for exports, a sell-on fee meaning that if Pep’s City came in for him, Celtic could stand to make a fortune from the player. It is expected that there is a 15-20% of profit from the deal sell-on clause, which is eye-watering when you consider some of the fees in football.