You are at:Home»Latest»King’s Gone and Super Ally Calls for Free Broomloan Return

Ally McCoist has broken rank from the Rangers party line by demanding that the visiting allocation be reinstated at Glasgow Derby games. Rangers took the unprecedented decision in the summer of 2018 to carve Celtic’s allocation to less than 800, which Celtic reciprocated shortly afterwards.

Speaking to Talksport, the former Rangers player and manager said that the decision devalues the clash.

“I haven’t been to Parkhead for an Old Firm (sic) recently but I have been to Ibrox when Celtic only had 800.

“But then I went to the league cup final when Celtic won, the stadium was split and the atmosphere was just brilliant, you realised what you were missing.

“The atmosphere as you can still imagine for the home team with the vast majority of fans is good, but when the away section have a good support the atmosphere is fantastic.”

McCoist then discussed some of the reasons that he thought might have lead to the decision, without addressing the one that was probably more obvious. The fact Celtic had won 4 games at Ibrox out of four.

“I don’t really know how it started it was probably a bit tit-for-tat.

“I know Rangers I think were not too happy with the supporters getting stuck down the corner with maybe an obstructed view. It then led on one thing to the next thing.

Rangers chairman Dave King took the decision to stand down this week with his famous victory with the allocation, the only thing he has to show for his time at Ibrox. McCoist has pleaded with new man, Douglas Park, to get it sorted when football returns.

“When we get back playing football hopefully in the foreseeable future they can get it sorted.

“There’s something about the away fans, listen the home fans we love, the supporters who are loyal. But the away fans that travel always in my football career and memories, always make some noise.” 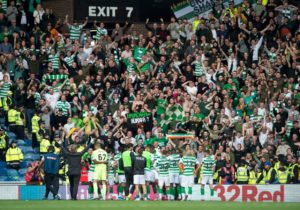 TalkSPORT’s Alan Brazil and guest Ray Parlour both agreed with McCoist that a decision should be made to reinstate the allocation. Brazil said that ‘nobody thought it was a good idea’, whilst Parlour saying that the visiting support make the atmosphere better.

“The away fans do make the atmosphere much better if you can get three or four thousand into the stadium.”

Having been in the reduced allocation at Ibrox, I can reiterate what McCoist is saying as the atmosphere is totally lost due to the one-sided nature of the fixtures now.

Hopefully the Ibrox club will decide to reinstate the Celtic allocation and announce the return of the Free Broomloan.