You are at:Home»Latest»Kristoffer Ajer opens up about Celtic future amidst transfer rumours

Kristoffer Ajer has blossomed into one of the best defenders in Scotland over the last few years and holds a very important place in Neil Lennon’s Celtic team right now. But his impressive performances mean that he has managed to attract the interest of clubs from all over Europe and has been continuously linked with a Parkhead exit.

Arriving at Celtic from Norwegian club, IK Start, in 2016 as a 17-year-old, Ajer initially found it hard to break into the first-team as expected. A loan spell at Kilmarnock changed that all though and the 6′ 6″ behemoth has not looked back since. Right now, he is one of the first names on Neil Lennon’s team-sheet every week and an established Norway international. As a result, the inevitable transfer rumours were quick to arrive as well. 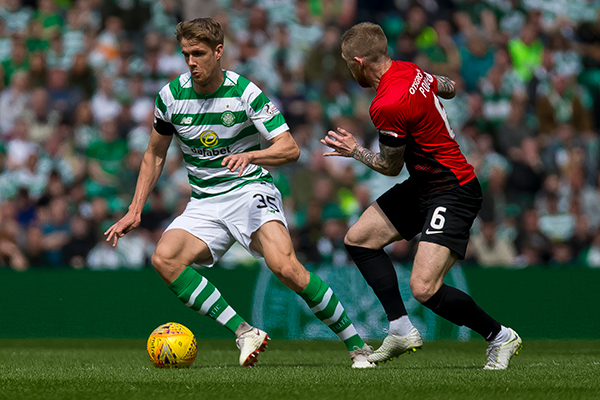 The 21-year-old recently opened up about his Celtic future. Speaking with The Scottish Sun regarding a potential move away from the club, Ajer said:

“I’m really happy now, I’ve got two and a half years at Celtic and I’m happy with it. I love playing for Celtic.

“All talk of contracts is between my agent and the club and I’m just concentrated on day-to-day work and trying to be the best footballer I can.”

It is certainly good news for Celtic that the Norwegian is not looking to move away from the club in the near future. Of course, things change very quickly in football and a big offer could turn his head, but at this point of time there appears to be no reason for him to leave.

Previous ArticleCeltic’s Fifers First Eleven by David Potter and a challenge to Ayrshire and Lanarkshire Celts
Next Article Opinion: Ismaila Soro could turn out to be a shrewd piece of business for Celtic