You are at:Home»Latest»Lennon Backs Celtic Duo to Seal Last 16 Spot

Neil Lennon has backed Scott Brown and Tom Rogic to make the difference and help seal Celtic’s place in the Last 16 of the Europa League.

Speaking to the media conference at Lennoxtown yesterday, on the anniversary of his return to Celtic, Lennon backed the pair to aid Celtic’s progression dreams.

Between Celtic and the draw on Friday are the Danish Champions Copenhagen at Celtic Park tonight but the manager has backed his returning captain, who went off injured last week in Denmark, to lead his side through.

“You know how influential Broony is to the team with the way he plays. To have him back is a massive boost.

“I thought we got a little bit ragged in the second half over there and we just lost that calming influence a little bit as well which is what he brings.”

Ryan Christie is out suspended and Olivier Ntcham is sidelined so Tom Rogic has an opportunity to showcase what he can offer to Celtic in what has been quite a difficult season for the Australian. 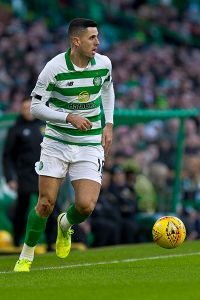 Rogic is a top quality player on his day but has made just 18 appearances as injuries have limited his involvement yet Lennon believes that he is ready to be the man to boost Celtic’s attacking midfield.

“As for Tom, he’s got a great chance of playing. I thought he played really well at the weekend. He’s a top player when he’s on form.

“He’s just had an ongoing issue with his knee and with the form of some other players he’s found it difficult to get regular game time. He’s champing at the bit to play. He is certainly in our thoughts.

“He’s a great lad. He’s very, very talented and we’ll need a bit of creativity tomorrow, maybe someone to unlock the door and Tom’s that type of player who can do that.”

I penned an article on how Rogic could be the man to shine for Celtic tonight, you can read that here.