You are at:Home»Latest»Lennon Ponders January Spending

Neil Lennon has confirmed that there will be funds to spend in January following the qualification to the Round of 32 in the Europa League. Lennon’s Gladiators defeated Lazio on Thursday at the Stadio Olimpico to confirm their place in the next round and the manager is looking to improve ahead of these tasks.

As reported by the Evening Times, Lennon gave his thoughts on the looming January transfer window, which the manager says that he will foray into to reinforce his side.

“In terms of signing players in January, us being in the knock-out stage is a huge carrot for players.

“I think we’re quite relaxed about things. We now have European football after Christmas and there is already an opportunity for the team to win a trophy. The players are full of belief and playing well and it’s very rare that clubs spend big money in January. Plus, we’re able to fend off any offers for our players we want to keep anyway.

“So, without tempting fate, we can move into January in a very strong position.” 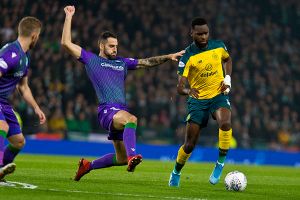 The manager suggested that a striking reinforcement could be top of his wish-list, in order to ease the burden on Odsonne Edouard – who is the club’s only fit first-team striker with Leigh Griffiths and Bayo sidelined. Edouard has been ever-present for Celtic this season and his workload needs managed, especially given his age.

“Again, he did a multitude of work on Thursday night, on and off the ball, so he’s not going to play every game from here to the end of January, that’s for sure.

“We’ll look at it depending on injuries. We’ll see how Bayo is in the next few weeks. There may be one or two positions that we try to strengthen but I wouldn’t say that many. I don’t think we’ll do a huge amount of business in January.”

Lennon will be looking to offload a couple of players – whether to cut the wage bill or get youth players game time. Players like Lewis Morgan, Luca Connell, Eboue Kouassi and Maryan Shved could be some of the players that Lennon looks to get game time for – with Scott Sinclair potentially moving on.

Previous ArticlePaul Ince’s Mean Spirited Dig at Sutton for Celtic goal celebrations, Elhamed’s ‘Bad News’
Next Article Matt Corr’s Rome Diary – ‘This is how it feels to be Celtic – Magic Moments in the Eternal City’