YESTERDAY Elvis got ‘all shook up’ and ‘left the building’. That’s Steven Pressley and the building on this occasion was Carlisle’s Brunton Park but you get the picture.

Today we continue with the musical theme with a mention for John Lennon. As it’s the dreaded international break (ie no Celtic games to attend) Lubo98 of this parish has headed off exploring the delights of Prague with his lovely girlfriend and fellow Celtic supporter Ruth. Yesterday they came across this fantastic piece of artwork on their travels around the city. 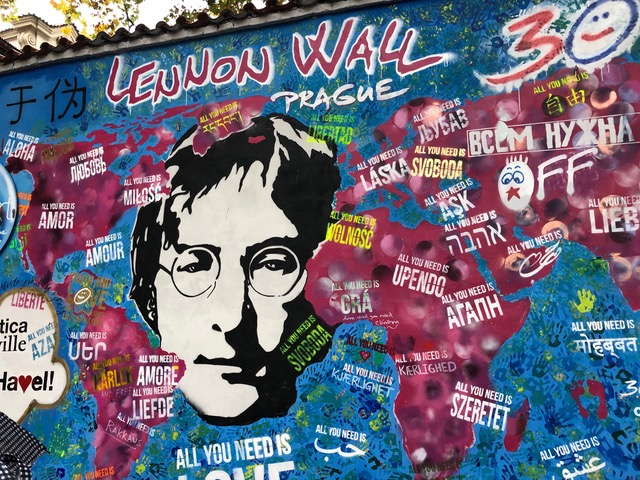 After John Lennon died in December 1980 it’s fair to say Young Czechs took on board his music and lyrics of love and inclusion and he became a pacifist hero to many. A symbol of the fight against the constraints of communism on political and artistic freedom.

Originally a solitary image of Lennon was painted on a wall beside a niche in the wall itself that resembles a tombstone. It is located in a rather secluded square in the vicinity of the French Embassy. The wall soon developed and as you can see it’s become a political focal point for of Course Beatles lyrics and Political graffiti.

The Wall has become quite topical as it’s something the protesters in Hong Kong have picked up of late and similar Lennon walls are sprouting up there and even in Tokyo as a show of solidarity.

Despite constant attempts to disrupt it and regular attempts to paint over the images with Whitewash it didn’t deter the citizens of Prague from using The Lennon wall as a symbol political focus.

It’s hard to think with Prague now being such a Cosmopolitan City and tourist destination that things as simple that we take for granted as the music of the Beatles, in fact the majority of western music was outlawed. Czech musicians were even jailed for playing it. You can see why the Hong Kong protesters have picked up the baton and are using it as a symbol of their own political struggles. It clearly resonates.

After 1989 the effects of pollution, weather and the lightweight nature of a lot of the images and words began to chip and fade away, soon there wasn’t much left. It was whittled down almost entirely until only the eyes of John Lennon was visible. It kind of looked like the westernisation of Prague meant the need for the Lennon wall had now become redundant. That was until tourists started making their own artwork on the wall. The property itself belongs to Knight of Malta and they also tried whitewashing the wall but again became covered with more images of Lennon, peace messages and of course the scribbling of visiting tourists. Yes Lubo98 I’m talking to you! Our day will indeed, come!

Eventually the Knights gave up and don’t try painting it anymore and it’s back as a tourist attraction for Prague. 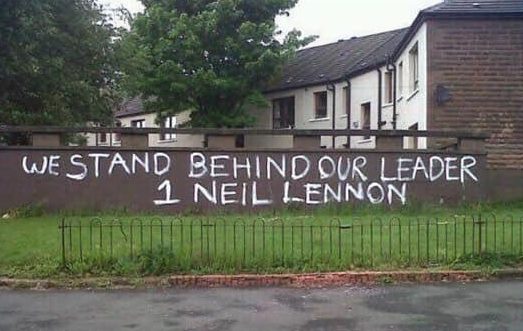 Glasgow got it’s own Lennon Wall back earlier this year, just after Neil Lennon had completed the Treble Treble and was appointed as the permanent manager, replacing Brendan Rodgers who had walked out back in February to join Leicester City.

The Lennon Wall concept isn’t just about brilliant music, it’s about much more than that. It’s about Imagine, it’s About Give Peace a Chance (converted to the Give us a Gaol chant) and it’s about Revolution.

Neil Lennon has been through so much in his time at Celtic both as a player and as a manager and he has had to deal with disgraceful sectarian assaults on the street and on the touchline, he’s received bombs and bullets in the post and has had to endure almost two decades of sustained sectarian abuse. He did manage a few years away from this when he went down to Bolton but otherwise it has always been there during his service to Celtic and indeed Hibs. Watch this Hibs Press Conference form last year… 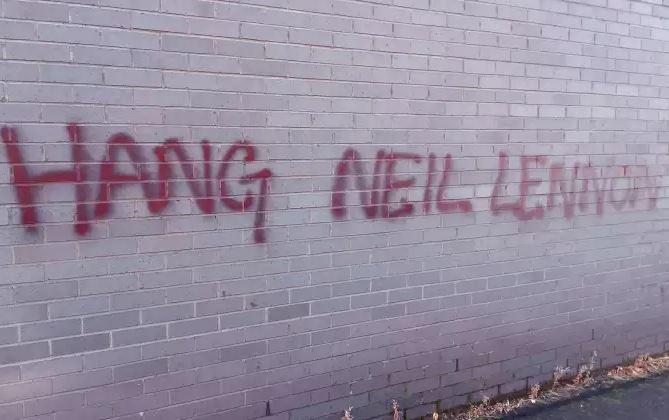 There’s an advertising board in the pass-way behind the North Stand that the club use to promote The Celtic View. Back at Trophy Day against Hearts in May, when Celtic Park was obviously packed, we noticed this board with its by then redundant mentions of Brendan Rodgers – an Irishman who curiously managed to avoid the shameful abuse that Neil Lennon has had to take. No one bothered with this poster, or about Rodgers. 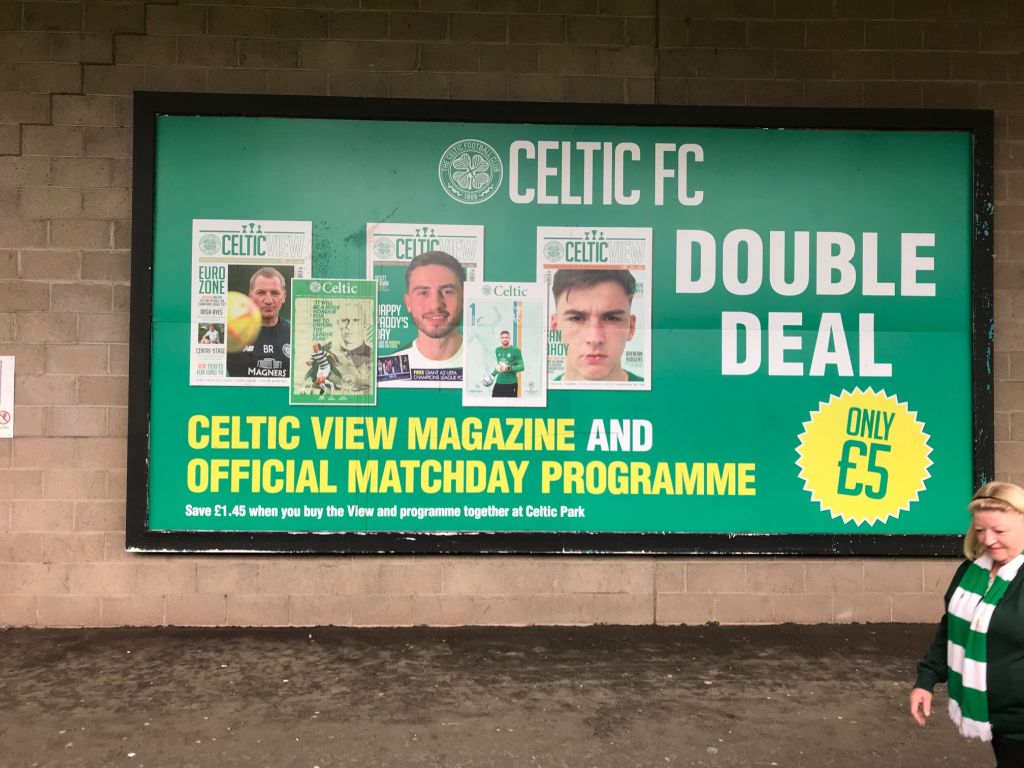 Maybe Celtic could use this space, or somewhere else around or inside Paradise to create our own Lennon Wall. Turn this redundant space into a Must Visit attraction for supporters and people on the Celtic Stadium Tours. Because Neil Lennon has had to deal with much more that just football matters at Celtic.

So what about a Glasgow Lennon Wall? A Glasgow-Neil- Francis -Lennon wall? Something Inside So Strong.

Anyone know a good graffiti artist? If anyone budding graphic designers fancies knocking something up let us know and email editor@thecelticstar.co.uk

“A football club will be formed for the maintenance of dinner tables for the children.” When Celtic was formed we all know it started with charitable intent. It’s something the club continues with today through the Celtic Foundation. The annual Christmas appeal for this is now well under way.

Within Glasgow lies another football club very much akin to those origins of Celtic.

It’s a charitable organisation that I only became aware of recently. This charity is called United Glasgow FC. Some of you will no doubt be aware of the amazing work they do, many more won’t be. Today on The Celtic Star I want to look into what they do and what they are all about. 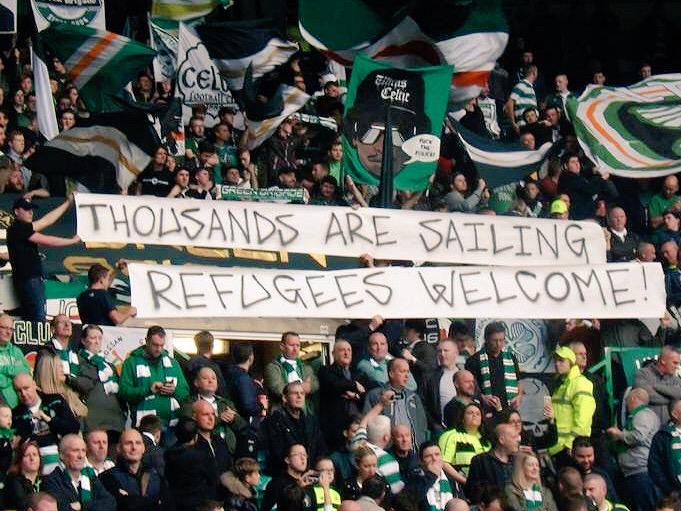 CONTINUE READING THIS ARTICLE BELOW…

Previous Article‘It’s now all about the money,’ Celtic criticised for putting Cash before Supporters
Next Article The American’s Dream and his Queue Jump Task at Celtic