You are at:Home»Latest»Lewis Morgan praises Scott Brown as being Celtic’s second manager

LEWIS MORGAN has hailed Scott Brown’s influence on the park at Celtic as being like having a second manager. The Inter Miami FC winger signed in January from the Scottish Champions and speaking to Si Ferry’s Open Goal, gave the lowdown of his time at Celtic. One thing that Morgan was happy to impart from his time with the club was how influential skipper Brown really is and that he will be able to make the move into the dugout when he hangs his boots up.

“On the pitch, he is the manager. I think Lennon gives him the freedom to do that as well and police the boys. 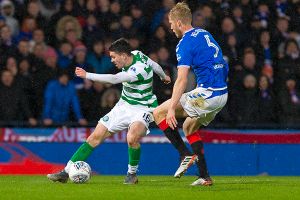 Brown is like Celtic’s heartbeat and even at 35 is still tireless whipping the players into shape. The midfielder is hoping to become the first man in Scottish footballing history to lift ten consecutive titles and in May, he will hope that dream becomes a reality.

For Morgan though, he is living life in Miami and will hopefully enjoy more of a fruitful spell there than he managed in Glasgow. Signed by Brendan Rodgers in January 2018, Morgan was loaned back to St Mirren before a move to Sunderland and then finally merited some action under Neil Lennon. Morgan started the 2019 League Cup Final but was replaced by Odsonne Edouard – who won the free kick that resulted in Jullien’s goal.