You are at:Home»Latest»Liam Kelly is Left In Leipzig: Another Disastrous European Away Trip

We’ve been looking at tales from the European adventures following Celtic around the continent from both Matt Corr and Liam Kelly and it’s fair to say that Matt seems to avoid the mishaps and misadventures that seem to afflict young Liam as he follows the Hoops in Europe.

UEFA have announced that no away fans will be permitted to attend match in the qualifiers but hopefully that will not be the case for the group stages of whatever competition that Celtic end up in (assuming we do of course) but let’s hope that it’s the Champions League.

Here’s another example of things going badly wrong for Liam Kelly, this time when travelling to Germany to see Celtic take on RB Leipzig…

Left In Leipzig: Another Disastrous European Away Trip 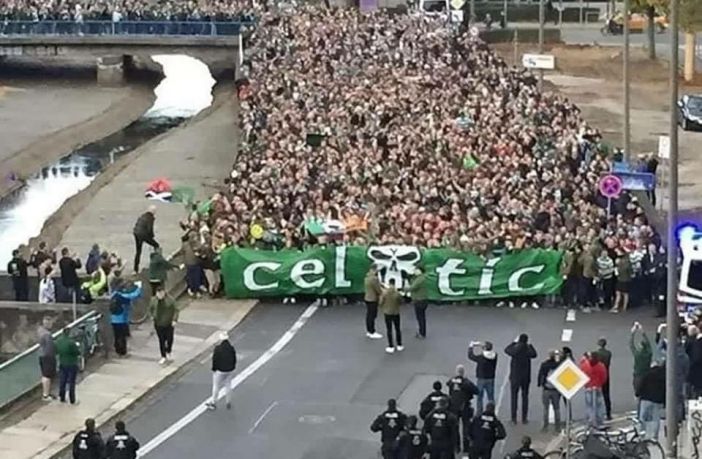 If you have seen the previous articles telling the story of my trips to Munich and Athens, then you’ll know that European away trips tend to end in disaster for me – Leipzig was no different.

Following the previous disasters with Stripey Cat and Paul, I had new company for the trip to Leipzig. Instead, I travelled over with friends from my local CSC in Bournemouth. Three of us were Celtic fans, the other two were friends of ours who came for the party, so it was a bit different from previous trips.

The Celtic support based themselves in Berlin and Leipzig. We had booked hotels in both cities, before deciding to stay in Berlin. This was the first error as the Leipzig booking only refunded half the amount – £100 down the pan. Nevertheless, I footed the bill and wasn’t bothered by the time 4am rolled around on the Tuesday morning and we headed for Luton Airport.

We landed in Berlin by lunch time and had a few beers before getting the train into the city. From there, we checked into the hostel and recognised a familiar face from Bournemouth working at reception much to our surprise. As a result, the hotel bar was to be our base for the night. 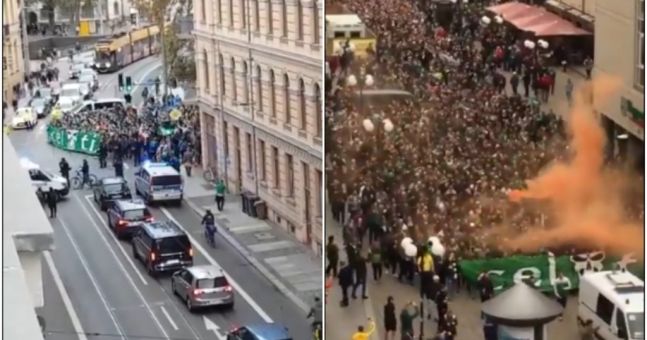 The next day, we headed into the city in search of Celtic fans. After an hours walk, stagnated by beer stops in supermarkets, we met with a few stalwarts of the European away support in a massive German beer bar. The venue was set out like a huge market, with three pint glasses being served for 10 euros a piece. That took us into the afternoon, before we looked for a bit of atmosphere. Posts on the Huddleboard had indicated that Kilkenny’s Irish Bar was the Berlin HQ for the Celtic support so we headed there, opened the doors and were hit by “Graffiti on the wall that says we’re magic…”

The party went on, song after song, cider after cider. I had over-indulged as evidenced by the fact I passed out on a bar stool. When I returned to the land of the living, one of our group was chucked out the pub for a genuine accident as he slapped the wall to the beat of ” The best left back in Scotland and he’s Celtic through and through,” only for his hand to go through the plaster board!

Nothing too out of the ordinary had occurred at this stage, it was just the usual electric atmosphere when Celtic fans gather in a European city and enjoy a few drinks. Three of the group then got a taxi onto the Irish Brigade gig at SO36 music venue, whilst myself and another headed to Burger King and the hotel bar for a more relaxed evening, having felt the full effects of the last two sessions, unlike others who take energy boosting substances. 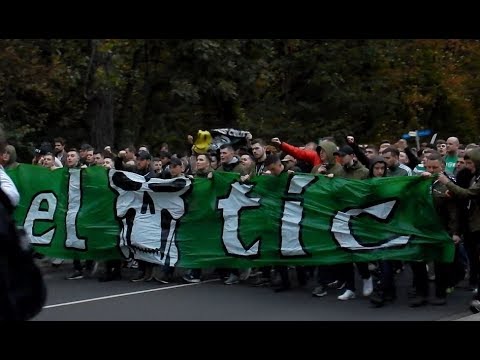 Match day involved an early rise, a kebab breakfast and a crate of lager for the bus to Leipzig. Five buses were put on for supporters, whilst other fans got the train. The hour and a half journey involved old Celtic songs, drinks and desperately trying to avoid having to use the toilet on board as the floor was swimming in 6 inches of urine. Certainly not a trip to take your partner on for a luxury German city break.

Once in Leipzig, we were dropped off at a volleyball arena and told to meet the bus back there after the match. Everyone walked to the city square, where 4000 Celtic fans had gathered. A football was flying around, songs were sang and drinks flowing.

The unmistakable sound of the Green Brigade’s drum pierced the air at about 5pm, which signified the start of the two hour long corteo/fan march to the stadium. The atmopshere was phenomenal as the police closed various roads to allow this army of Celtic supporters to head to the stadium. At each junction they would stop us, prompting pyro to be set off, chants to choreographed from the megaphone and general mayhem to ensue. The locals seemed a bit confused at what was happening.

Everything went wrong from the moment we arrived at the stadium. A massive queue stood at the Celtic end, meaning many fans didn’t get in until half time. As such, we bustled into the Leipzig end, where many other Celtic fans had got tickets. We had barely got to a seat with a beer, which we later found out was non-alcoholic, before Leipzig took the lead. It didn’t take long for the German’s to double their advantage.

Little else happened of note on the pitch, whilst off it there were a few flurries of noise from the Celtic end but the away support was quite subdued for a European away game, perhaps a reflection of what was happening on the park. A much changed Celtic team, featuring Mulumbu, Gamboa, Eboue, Morgan and Hendry, fell to a 2-0 defeat.

Given that Brown, Sinclair, Lustig, Griffiths and co were injured, the result wasn’t very surprising. Though, it was quite disappointing after a full strength Celtic had beaten Leipzig 2-1 in the home leg. Anyhow, we headed back to the volleyball arena for the bus home in good spirits, looking forward to a drink and a laugh on the way back to Berlin. 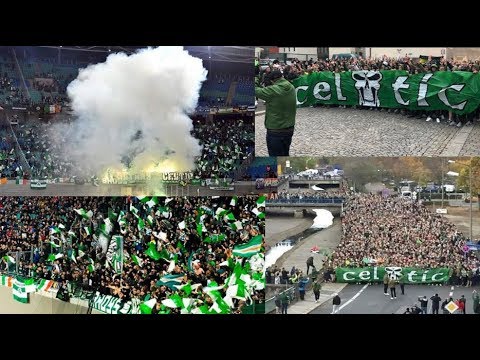 As the first ones there, we didn’t feel too much panic when no bus appeared. However, five of us soon turned to 10, then 20… still no bus. One of the boys waiting with us had got a text from a friend who said the bus had parked in a nearby car park and left half empty. We were now stranded in Leipzig with no digs at 11pm. Our cheapest route to the hostel was to get a train so we jumped on a tram up to the main train station, only to find that we had missed the last train back to Berlin by 15 minutes. Next stop, the taxi rank. To our horror, we were quoted 400 euros for the journey home.

It goes without saying that we rubbished the offer and took shelter in the local Irish bar. After a while, cider did little to lighten the mood and we had a decision to make. Either we try and find a hotel in Leipzig or we pay up for the taxi. The latter was decided upon and it was hoped that the driver would be open to a bit of bartering. This caused a huge argument to erupt as the German was very upset by our suggestion the 400 euros was too much. We had no choice but to take the taxi and cough up 80 euros each, up front.

One of our group absolutely slagged the driver rotten the whole way for his attitude. He never got a word in response, and continued his tirade to make us laugh as we all assumed the driver couldn’t speak anything beyond basic English. Fast forward 90 minutes and as the car ground to a halt at the hostel the driver turned around and said “Thank you, English barstewards.”

Our last full day was spent sight seeing. Checkpoint Charlie, the Berlin Wall and the gates were all taken in. We even had time to buy Russian hats before getting some drinks and riding a “bar on wheels” back to the hostel. 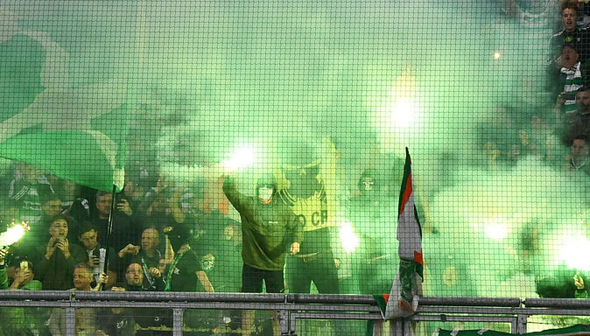 Berlin is renowned for its underground nightclub scene. We had been warned that the clubs were extremely difficult to get into. Bouncers are likely to turn you away if you speak English, are in a group of men or dress to vibrantly or too smart. With that in mind, we all wore black with trainers, kept quiet and asked some women to help us get in. It didn’t work.

We managed to get into a few quirky bars and a double decker bus turned into a pub, but had no joy on the club front, until we finally found a club that looked like an old mansion. We got in and each room had a different theme. One room had a phone box, which then led to a room full of sofas. From there we went to place with strobe lighting and a ball pit. It was full of strange characters but something that had to be experienced when in the city.

We headed for home a day later, weary, hungover and 3/5 of the group vomiting on the plane. It wasn’t one of the most disastrous or eventful trips compared to those previous, it did end up in a poor result though. However, the next trip to Rome more than made up for it as everything went right and Celtic made history!