You are at:Home»Latest»Lightning Skelps Twice, On this Day in 1991 – Celtic 3 Rangers 0

On this day in 1991 Celtic played Rangers at Celtic Park for the second time in a week. Quickly following up on a 2-0 St Patrick’s Day Scottish Cup win, Celtic faced their rivals again this time in the bread and butter of the Premier League.

It had now been two and a half years and nine previous meetings since Celtic had won a derby encounter in the league. The Scottish Cup win for Celtic had extended Rangers 10 year cup wait the previous Sunday. It was time to lay a few ghosts to rest for Celtic and they did just that.

The game itself saw a lot more football played than in the previous week’s cup tie and less in the way of red cards for referee George Smith to hand out, after 4 dismissals the previous week. 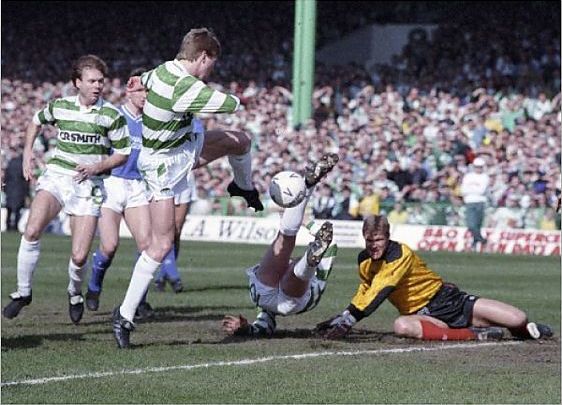 Rangers then took complete control of the next half an hour at Parkhead. Thankfully for all their efforts they couldn’t score.

‘Judas’ Johnston headed past after Spencer fed Nisbet wide. Pat Bonner stepped up and grabbed almost everything from the air while commanding his box as best he could under regular Rangers onslaughts.

Nisbet again crossed from a Gary Stevens pass. Paul Elliot’s high boot into the face appeared enough to worry Ally McCoist as he shut his eyes and headed wide at the far post as Bonner again moved across to cover. Richard Gough then had a header off the line from McStay. Bonner from the corner made a superb save.

The Paul Elliot-Richard Gough battle saw both players booked late in the first half but neither player had asked for anything, the referee could have let it run. Mark McNally was booked for a foul on Spencer and as Celtic made some sort of late first half revival Joe Miller swung in a corner that St Patrick’s Day hero Dariusz Wdowcyk put his attempt just wide.

The start of the second half again saw Rangers in the ascendency. ‘Judas’ Johnston was fouled by John Collins in the shadow of the main stand. Nisbet played the ball into the box and McCoist managed to get a touch on the ball and play into the path of Rangers John Spencer. It looked the easiest of finishes but Spencer appeared to panic and although he did get the shot goalward, Paul Elliot blocked the ball short of the goal line. It was the moment where Celtic woke up and went on to dominate proceedings.

Celtic broke up the park and Tommy Coyne drove into the box. He managed to get round the keeper but over-ran the ball. It looked like the chance may be gone but Coyne was coolness personified as he turned himself back into an angle where he could pass. He found Joe Miller darting between two defenders and Miller tapped the ball into the net to put The Hoops two goals up. It was a goal Miller’s performance deserved and the assist was sheer determination and endeavour from Tommy Coyne. 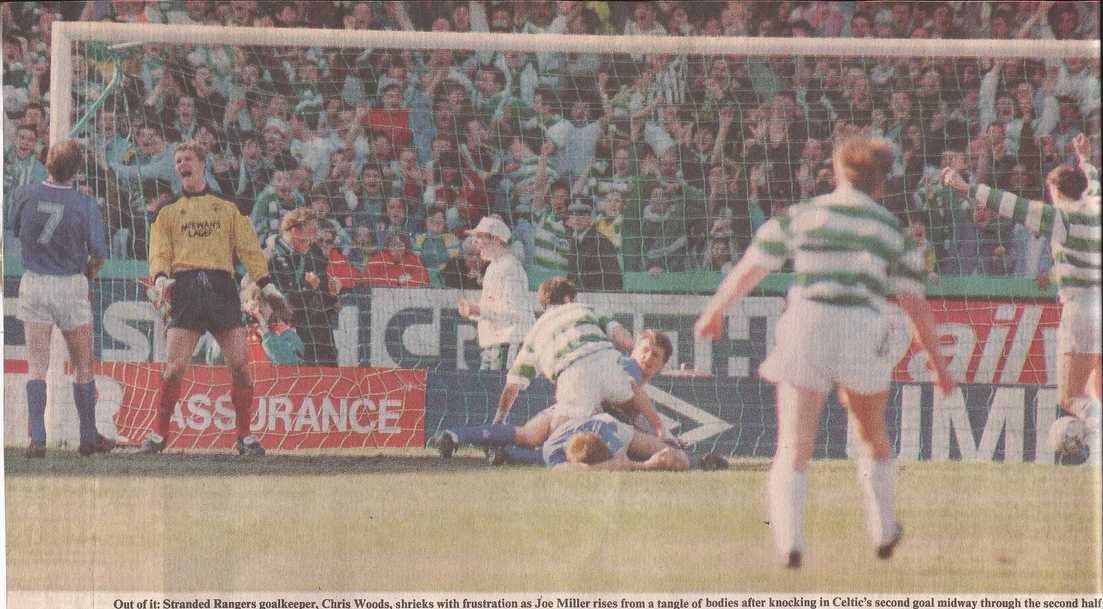 With daylight between the sides Rangers ill-discipline returned. Scott Nisbet committed a hideous tackle from behind, off the ground and straight into the calf off Paul McStay. It was a brutal assault and ref Smith had no choice but to send Nisbet off. The Rangers man had the cheek to look surprised at the decision. It was a wild challenge and Nisbet walked off to a ‘Not the View’ fanzine inspired, red card display from the Celtic support.

Rangers had two further chances. Bonner flapped from a throw in and Spencer once again had a tap in but Anton Rogan continued his hero of the day performance by clearing off the line. ‘Judas’ Johnston then found himself straight through on goal but shot pathetically straight at Bonner. 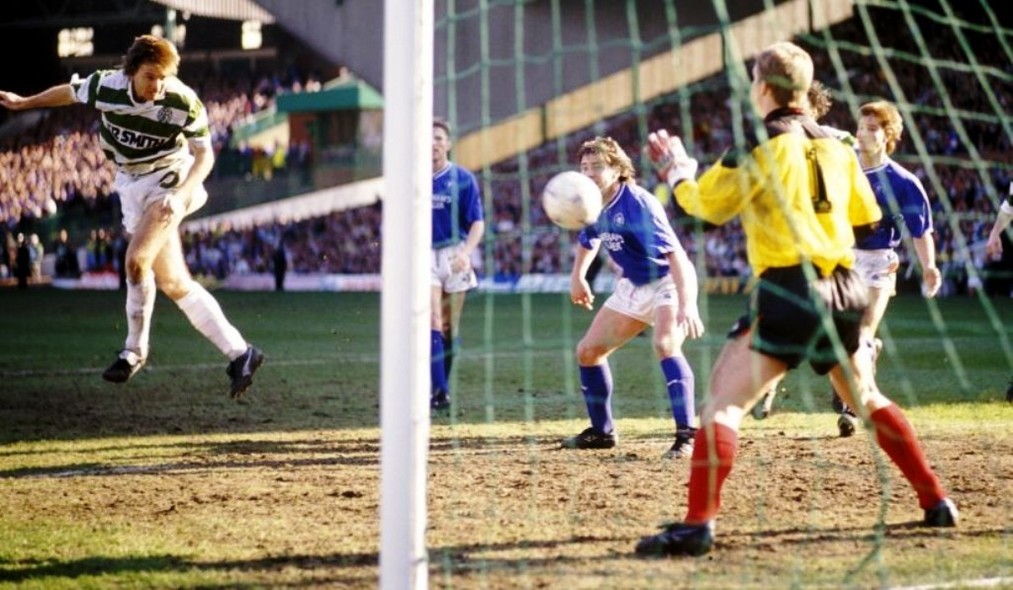 The impressive Joe Miller also had a hand in Celtic’s third goal. He fed Paul McStay who delivered a devastating cross for Tommy Coyne. The Celtic striker met the ball well and powered a downward header into the keeper’s bottom right corner. 3-0 Celtic and a Palm Sunday Humiliation was added to the previous week’s St Patrick’s Day massacre.

The result meant two victories in a week over our greatest rivals. A tough season was starting to look like there was promise ahead. Yet in true Celtic style of the time they immediately lost their next game 2-1 to Motherwell. The inconsistency of Celtic in the early nineties summed up.

As ever we’ve included the match highlights to help you through these weeks without our regular fix of football.

Previous ArticleCoronavirus Lockdown Shuts Celtic Services
Next Article It was not a night for Champagne, Mowbray’s Miserable Celtic Exit