You are at:Home»Latest»Livi boss praises Celtic’s ‘hunger’ after thumping win

Livingston manager David Martindale has praised Celtic’s hunger after he watched his side get dismantled by John Kennedy’s side yesterday. Goals from James Forrest, David Turnbull, an own goal, two from Moi Elyounoussi and Ryan Christie sealed a thumping 6-0 win and Martindale had no complaints in his post match comments.

As reported by The Daily Record, Martindale accepted that Celtic were fantastic as four second half goals compounded the West Lothian side to a defeat in the first game of the split.

“I was angry after the game in the changing room but now I’m disappointed. I felt there was an acceptance out there, we accepted that and it’s not what I want from my players.

“We need to work on that. But on the flip side – and I’m not trying to sugar coat it – I thought Celtic were fantastic today.

“We allowed them to be fantastic but they popped the ball about really well. There was a hunger and an appetite with Celtic that I haven’t seen in a while.

“It looked like a team who were playing for their manager. If John has any chance of the job, that will have done him the world of good. 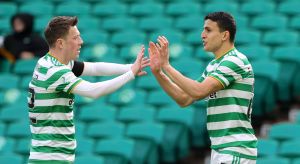 “You could see the players were playing for John, they were enjoying it.

“Obviously, we made that easier for them and I don’t think we were anywhere near it after half an hour.

“We just didn’t get close enough to Celtic’s players.

“In the second half, they absolutely battered us. When we managed to get on the ball, there were three or four Celtic players there on the press.

“But we’ll get back at it this week in training, that won’t be a problem. It didn’t happen for us today but we’ll make sure it happens next week.”

Celtic were at their free-flowing best, something that has been missing this season as the passing, movement and attacking from years previous returned. It is too late for the league but if Celtic can replicate that form next weekend, there is a good chance of sealing progression in The Scottish Cup.

Eddie Howe is still the favourite for the manager’s job at Celtic and whilst Kennedy has been impressive as interim boss, he may not be ready to take on the job of a vast rebuild. With that said, Kennedy should be part of any new regime with a view to becoming a future Celtic manager.

Previous ArticleHighlights as Celtic prepare for Ibrox by destroying Livingston
Next Article Eddie Howe? John Kennedy? Who is going to be the next Celtic manager?