Having read David Potter’s fine article on Joe Baillie and the 1951 cup winning team was left feeling rather melancholic. In particular the part where David stated:

“There must now, one fears, be every few “survivors” of that 1951 Scottish Cup final – one of them is the great Celtic historian Tom Campbell – but the players have now all gone, as indeed have most of the 134,000 crowd.”

My Grandfather attended that very game and indeed is no longer with us today, and with him went my main source of wonderful Celtic stories, that is probably why I’m such an avid reader of The Celtic Star these days with the historical articles a big attraction.

The reason that particular game resonated is I used to think of myself as a jinx when it came to following Celtic, my Grandfather also liked wind me up and encourage those thoughts. I saw Celtic win the Centenary Double in my first season in 1987/88 though I only went to a handful of games. My first season attending the games with my old Granda religiously was the following year when Joe Miller won the Scottish Cup in 1989, with a lovely assist from a stolen Roy Aitken throw-in to beat Rangers 1-0 at Hampden. 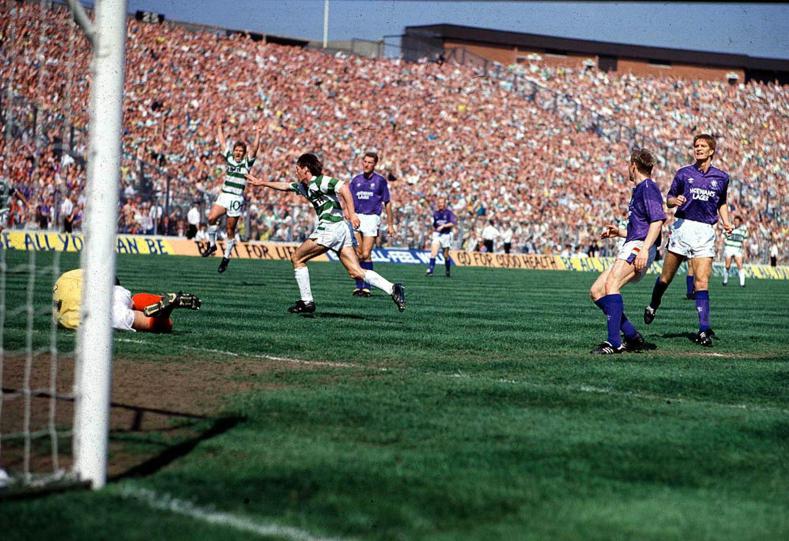 Celtic then went through what I assumed must have been the worst period in the club’s history and I took it personally. Thankfully those tales of times gone by made me realise I wasn’t the Jonah I believed I was. I was reminded Celtic’s win in that 1951 cup final had seen my Grandfather’s generation waiting a lot longer for silverware than this impatient little tyke had. 1938-1951 certainly beat my wait of 1989-1995. He had therefore waited from 12 years old to 25 years to see the Celts lift a trophy of note. No contest. I was not a Celtic curse after all.

Dan Drake saw the first ever Celtic game, and lived long to see the rise of the club, all the way through much (and hopefully all) of the club’s nine in a row title wins & European Cup triumph!

After reading David Potter’s article, I started looking at Celtic’s first ever game 132 years ago today. Initially I was just looking for a match report, when I came across this brilliant article on the Celtic Wiki from a supporter who was at that very first game, a 5-2 win over Rangers, or Rangers Swifts depending on where you read or who you choose to believe.

I’m sure many of you have already read this but I’m equally certain that many won’t have, so I’ve re-written that interview from the Celtic View in 1972 – I’m sure they won’t mind, it’s not the easiest article to read. It is certainly worth sharing and even revisiting today for those of you who may have read about it in the past. 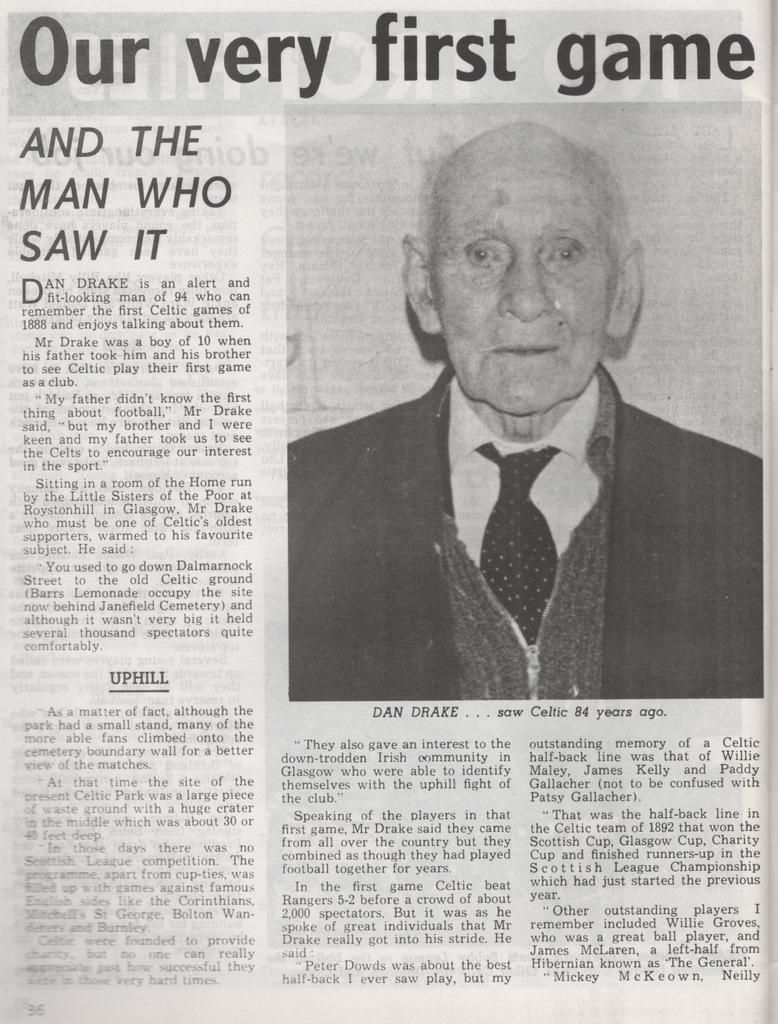 The supporters name was Dan Drake and he was 94 years old when the Celtic View interviewed him. According to ‘Uniquely Celtic’ by Frank Rafters, Dan was one of six children. Born in 1878, unlike his siblings who were all born in Glasgow, Dan is recorded as being born in England, though no exact details of location are given.

The 1891 census has him living in Anderston, though that particular area is no more having been replaced by Motorway. Dan is recorded as living in Maryhill in the next couple of decades and the 1911 census – after Celtic had won six consecutive league titles – has Dan recorded as working as a Tailor while living with his mother and sister following the death of his Father.

Mr Drake was a 10 year old boy when his Dad took him and his brother to that historic game. Here is what he had to say in that brilliant interview. Thank you once again to the brilliant Celtic Wiki site where we found  the Celtic View clippings of the original interview, shown above.

“My father didn’t know the first thing about football, but my brother and I were keen and my father took us to see the Celts to encourage our interest in the sport.”

“You used to go down Dalmarnock Street to the old Celtic ground and although it wasn’t very big it held several thousand spectators quite comfortably.”

“As a matter of fact although the park had a small stand, many of the more able fans climbed on to the cemetery boundary wall for a better view of the matches.”

“At the time the site of the present Celtic Park was a large piece of waste ground with a huge crater in the middle which was about 30 or forty feet deep.”

“In those days there was no Scottish league competitions. The programme apart from cup ties was filled up with game against famous English sides like the Corinthians, Mitchell’s St George, Bolton wanderers and Burnley.”

“Celtic were founded to provide charity but no one can really appreciate just how successful they were in those very hard times.”

“Peter Dowds was about the best half back I ever saw play, but my upstanding memory of a Celtic half back line was that of Willie Maley, James Kelly and Paddy Gallagher (not to be confused with Patsy Gallagher)

“That was the best half back line in the Celtic team of 1892 that won the Scottish Cup, Glasgow Cup, Charity cup and finished runners up in the Scottish League Championship which had just started the previous year.”

“Other outstanding players I remember included Willie Groves, who was a great ball player and James McLaren, a left half from Hibernian known as ‘the General’. Mikey McKeown, Neilly McCallum and Johnny Madden were other great player I remember.”

“Talking of Johnny Madden, he went to Prague at the beginning of the Century and became a national figure as a result of his wonderful coaching of footballers.”

“The great thing about the Celtic teams was their ability to play football on the ground. They combined so well in their passing that people who disliked them said they needed a carpet to play football.”

“One problem Celtic had in the beginning was finding a really good goalkeeper but that was solved with the arrival of Dan McCarthur. He was on the small side but his timing and agility more than made up for his lack of height.”

“Although most people consider John Thomson to have been the greatest Celtic goalkeeper of all time, I think Thomson and McCarthur were so outstanding you couldn’t say one was better than the other.”

“The best full-back partnership was that of Jerry Reynolds and Dan Doyle, though strangely enough they were very different types of players.”

“Reynolds could head a ball as far as most players could kick it, and Doyle could kick a long ball with deadly accuracy.”

“Doyle used to be a torment to opposition players when taking free kicks. He could hit the ball right into the opponents’ penalty area from his own half of the field, but if anyone moved as he ran to hit the ball he just stopped dead and started his run all over again.”

“This seemed to have an unsettling effect on defences. I also remember with joy the great left wing partnership of Sandy McMahon and Johnny Campbell who each seemed instinctively to know what the other was going to do.”

“Celtic had in fact signed the Benburb left wing of Barney Crossan and Campbell but Crossan couldn’t oust McMahon from the inside left spot.

“In the middle nineties however Crossan won a Scottish Cup medal with the now defunct St Bernards whom he had joined from Celtic.”

“What Willie Maley did for half a Century has been carried on by Jimmy McGrory and Jock Stein and, judging by the players they’ve got at present, Mr Stein can go on adding to successes to those he has already won.

“Considering all the things that have happened in Celtic’s history I think the greatest triumph of all has just been completed – winning seven league championships in succession.

I loved that final tongue in cheek comment from Dan Drake who passed away in 1976 at the age of 97.

Alongside attending that first ever match he therefore would have witnessed Celtic lift the European Cup as well as seeing the completion of that first 9-in-a-row and everything in between.

It would of course have been fascinating to listen to his stories, but having Mr Drake’s thoughts on attending that first game as a wide eyed 10 year old, and his description of the players who entertained the early Celtic support, is a wonderful record to have. It is certainly one worth revisiting on today’s anniversary of Celtic’s first ever game.

When Celtic won 9-in-a-row for the second time I wondered just what my Grandfather would have made of it all. When Rangers won their nine titles, he said: ‘who remembers the second man to climb Everest’. I liked that.

What would he and Dan Drake think about Celtic going for a record breaking 10 consecutive titles I wonder? Something tells me there would be comparisons made to teams from the past. It would be wonderful to hear their thoughts. At least we have Dan Drake’s interview from 1972. What a fine record to have.

A wee reminder of where we came from ☘️☘️☘️ pic.twitter.com/UOYPQ19kXZ

Nae prizes for guessing wit came up on my FB timeline this morning.

🗓 ON THIS DAY: In 1888, Celtic play their first ever match as they triumph 5-2 over Rangers in the friendly tie at the first Celtic Park. pic.twitter.com/fH3rLBfgwH

Previous Article“Ronny helped me achieve a dream and I will always be thankful to him,” Callum McGregor
Next Article A Hymn for the Dawn of the Free – The significance of Jock Stein’s second trophy as Celtic manager