You are at:Home»Latest»Match Report from Celtic’s big win at Forfar. ‘No commentary, one camera from a mile away, and a goal missed’

Forfar Farmington 0 Celtic 8 – Niall J’s Match Report from Forfar…No commentary, one camera from a mile away, and a goal missed. Should have kept the £4 and just watched the highlights. Still, the Celtic women march on…

Celtic headed into this afternoon’s SWPL1 encounter with Forfar Farmington with a few ghosts to lay to rest. This Celtic sides’ only real aberration against any opposition outside the top three in this campaign came with a 2-2 draw against today’s opponents at K-Park in December, as goals from Chloe Craig and Natalie Ross grabbed a draw from the jaws of defeat.

As such this afternoon’s encounter with Forfar could have been a banana skin for a Celtic side aiming at the least for Champion’s League qualification – and the newly announced UEFA riches announced this week – and with no little hope their title challenge may also still be possible.

If Forfar however considered the possibility this was a game where they could again impact on Scotland’s big three, and deliver another bloody nose to Celtic’s challenge, it didn’t take long for such hopes to be put to bed. 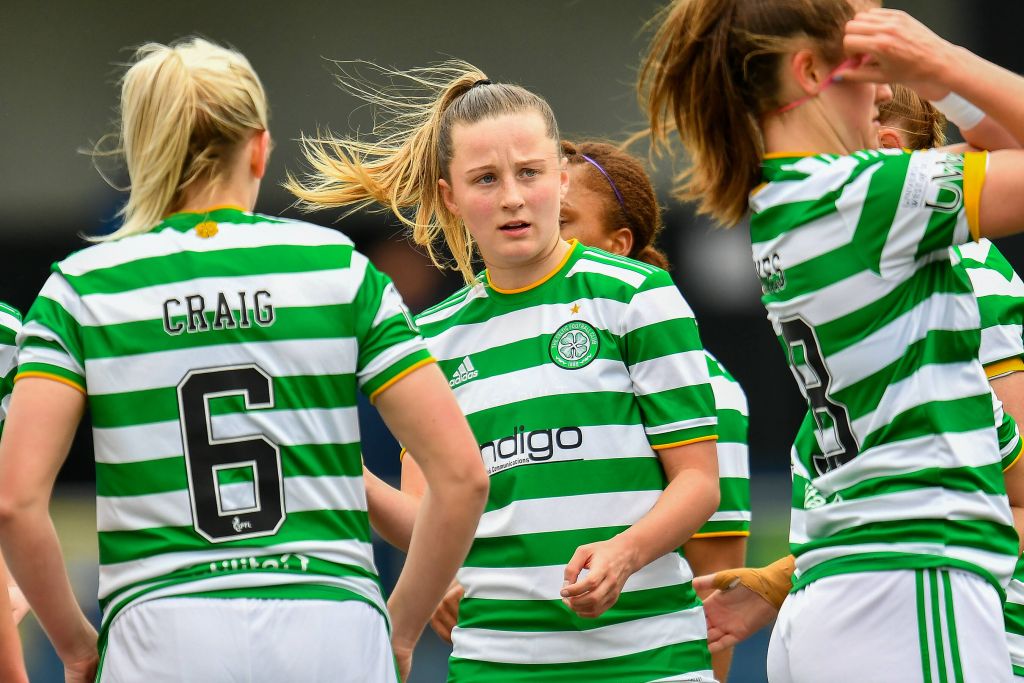 Inside the opening minute Celtic laid out their stall and took an early lead. From a Mariah Lee cross Anna Filbey found space and subtly headed Celtic into an early lead. As such an avalanche of goals may have been expected. Well, that was to come. However, it took in a game of one-way traffic throughout, until the 37th minute before the Celts extended their lead as Izzy Atkinson chest controlled the ball before executing the most perfectly timed of half volleys to put the Hoops two goals to the good.

And with Celtic looking comfortable as we approached the break there was more to come, though if you’d paid Forfar £4 for your stream, you’d be more than a little disappointed to see the through pass and the celebration but not the finish, as apparently without any video evidence to support it, Sarah Ewens put Celtic 3-0 up and ended the game as a contest.

Yet still the Celts had time to find a fourth goal. As I rewound the live feed looking for the earlier Ewens strike, Sarah Teegarden sent the Celts in four goals to the good with a beautifully executed finish with the outside of the left foot in off the underside of the bar.

If Celtic were happy enough with the blistering end to the first half, they certainly showed no signs of releasing their foot from the throttle in the second half. 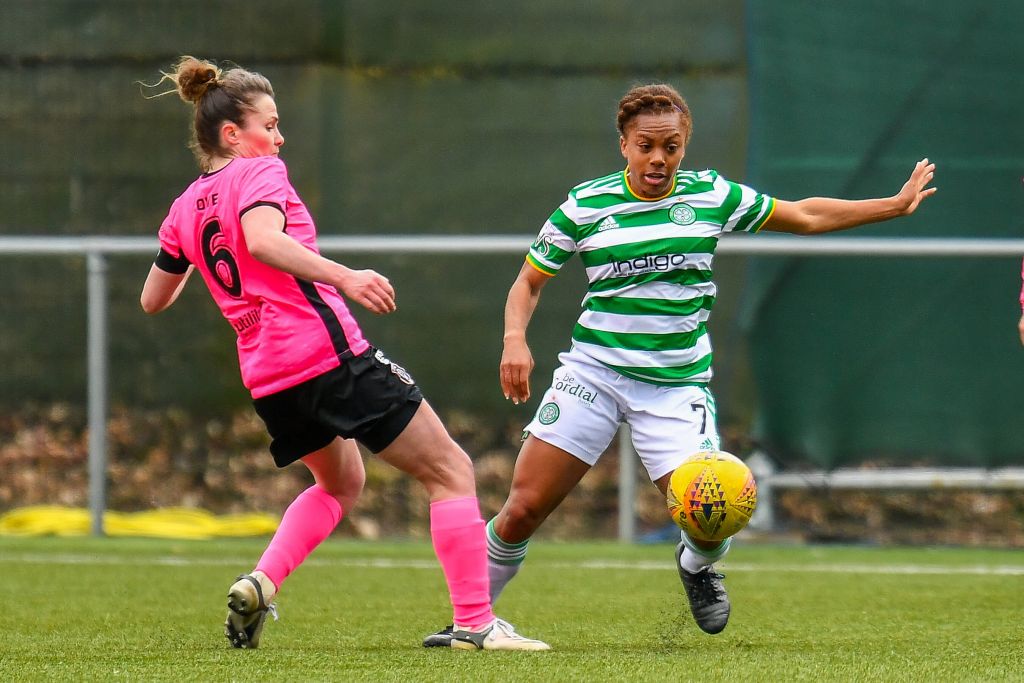 Firstly, Mariah Lee spun and turned inside the area taking two players out the game before tumbling to the ground. The referee, a somewhat shaky official throughout, pointed to the spot. And despite the attempts of Mariah Lee to encourage Chloe Craig to allow her the opportunity to convert, for the second week in a row Craig struck the penalty low to the ‘keepers left and post to put Celtic five goals to the good.

Yet much like last week, Craig’s penalty took an eternity to find the net and was aided but a ‘keeper who fell to the ground in instalments. Craig is a fine player, a penalty taker she is not, and as much as respect should be shown to a second successive penalty in two games being converted, it would be wise if Fran Alonso found someone with a more natural strike of the ball to take the kicks from twelve yards before it comes back to haunt us when it really matters.

There was more to come, when it came to possible penalties, moments later as Mariah Lee was challenged in the box. The challenge as robust and certainly looked a foul, however the referee’s decision was bizarre, as assuming the challenging player touched the ball, and hence not a penalty, as the ball rolled out it would have been a corner right? Yet no, not only was the challenge not a foul, the referee even managed to award a goal kick. Even with next to no volume on Forfar’s awful feed, I could hear the dulcet tones of and English accent calling out just that fact. I wonder who that could have been.

Celtic however were far from done as Mariah lee finished superbly with a far post diving header to put the Celts six goals to the good before Anna Filbey added her second of the game as Mariah Lee drew a foul thirty yards out and the subsequent free kick, delivered by Lisa Robertson, was knocked down into the path of Filbey for an incredible seventh goal, before Mariah Lee finished the encounter off with another header and an eighth goal for a rampant Celtic side.

If Celtic intend to be in the mix of Champions League qualification, and indeed a league title challenge, dealing with opponents like todays will go a long way to ensuring they are in about things at the business end of things.

Laying to rest the ghosts of previous dropped points, by heading to Station Park and exorcising those pesky spirits, shows a growing maturity allied to a genuine ruthlessness within a group of players that may have been missing in December. Those above them in the table would do well to now consider there are three horses approaching the final furlong in the SWPL, and one is building up a head of steam.