Celtic travelled through to New Douglas Park this afternoon to play recently promoted Hamilton in the SWPL1 knowing that Glasgow City had beaten Hearts 2-0 and theRangers were already well ahead against Aberdeen in the other matches.

There was therefore zero room for error from Fran Alonso’s side with the Spanish coach once again shuffling his pack with Logan back in goals – where she was effectively a spectator – and Shorts, Warrington and Bartle all back in the side this week following the 6-0 win over Partick Thistle last Sunday.

Alonso was still without Izzy Atkinson, who picked up an injury in the last international break while away with Ireland and Sarah Harkes still struggling with a knock.

Not that it mattered too much, Celtic playing in the all green away kit, were clearly way too good for the home side to cope with. Jacynta, making her first start of the season should have opened the scoring pretty much straight away but her effort was straight at the keeper. Two minutes later though she got the better of that particular early duel when her shot from distance gave the Accies keep no chance.

It was all Celtic, with the home side happy to sit in and limit the inevitable damage that was clearly coming their way. They kept Celtic’s out for another quarter of an hour before Wellings set up McGovern whose shot into the top postage stamp corner doubled the Celtic lead.

Celtic continued to play their controlled position based build up football patiently, knowing that the opportunities would come but the home side were looking towards the rest bite of the referee blowing his half-time whistle but it just didn’t come quickly enough for Accies. 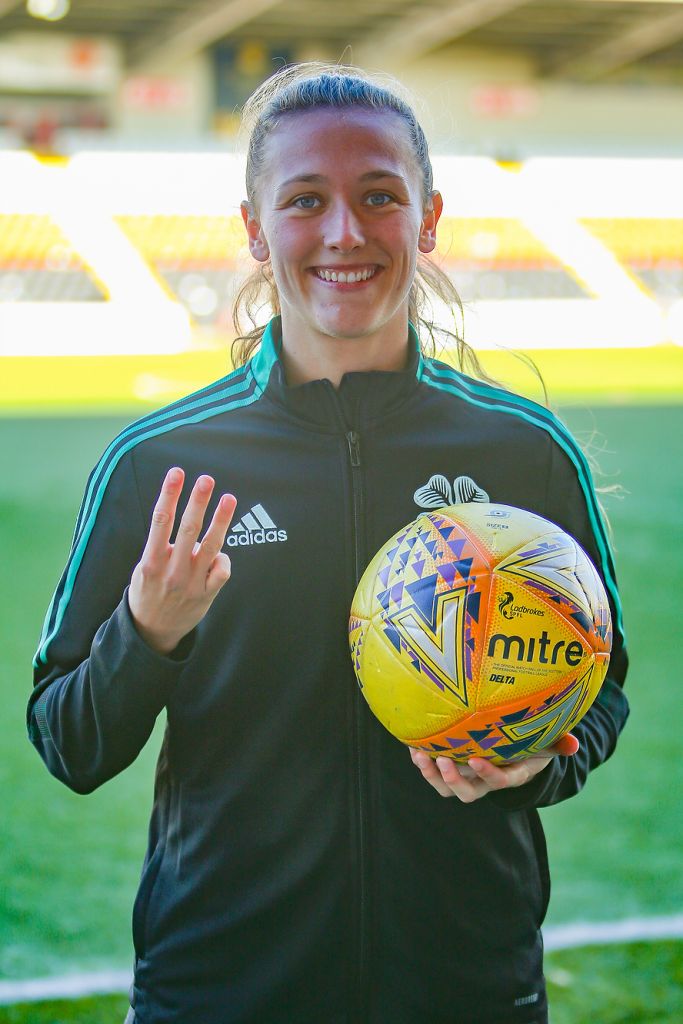 First Charlie Wellings, who scored a hat-trick last Sunday, rounded the keeper and rolled the ball into the empty net to make it 3-0. Worse was to follow for the Accies, Wellings has a wonderful effort brilliantly saved at the expense of a Celtic corner and in a manner so unlike watching Celtic, Alonso’s side are a real threat from these set pieces. Shen’s brilliant delivery to the back past to McGovern who simply could not miss. At long last the whistle came and a dazed and confused home side retreated to lick their wounds.

The second half started in much the same way as the first 45 minutes, Wellings beautifully set up Jacynta who should have scored but somehow managed to drag her effort wide of the post. Six minutes into the second half and when Celtic won another corner the outcome was the same, this time Hayes on the end of it to head in Celtic’s fifth of the afternoon.

Jacynta then rattled the crossbar and the follow-up by Shorts smashed off the post, somethings they just won’t go in.

Alonso made a triple substitution on the hour mark with Bowie, Toland and Olafsdottir Gros replacing Warrington, Clarke and McGovern. With 72 minutes played, after great play by Bowie on the right wing, Oli Chance’s low drive from the edge of the penalty area found the bottom corner to make it six.

By this stage Logan in the Celtic goals had had absolutely nothing to do but Hamilton decided to press further up the park and even managed a shot on 74 minutes but it went harmlessly wide. The home side then won a corner of their own on 76 minutes but it was easily cleared.

The match’s closing stages was uneventful with Celtic happy with their 6-0 advantage, Wellings had a sniff at goal in stoppage time and bursted the net but the assistant referee’s flag prevented the magnificent seven.