You are at:Home»Latest»Matt Corr – If you know History, Sept 1988 – 4 defeats from 6 league games for Celtic
Showing 1 of 4
Next

Three days after the League Cup exit at Tannadice, Saturday, 3 September 1988, Cesar’s defending champions recommenced their League programme with a home victory over Hamilton Academical. The teams had met at Celtic Park just ten days earlier in the knockout competition, the Hoops winning 7-2 to set up that quarter-final with Dundee United, however, there would be no repeat of that goalfest in front of 24,000 largely-disillusioned supporters, still suffering from the 5-1 defeat at Ibrox the previous Saturday, a horrific crash-landing after the Centenary Double highs of late spring.

Billy McNeill had made one change to his starting line-up for the trip to Tannadice – Joe Miller replacing Billy Stark – and he went with that same eleven against the Accies, setting out his team as follows; 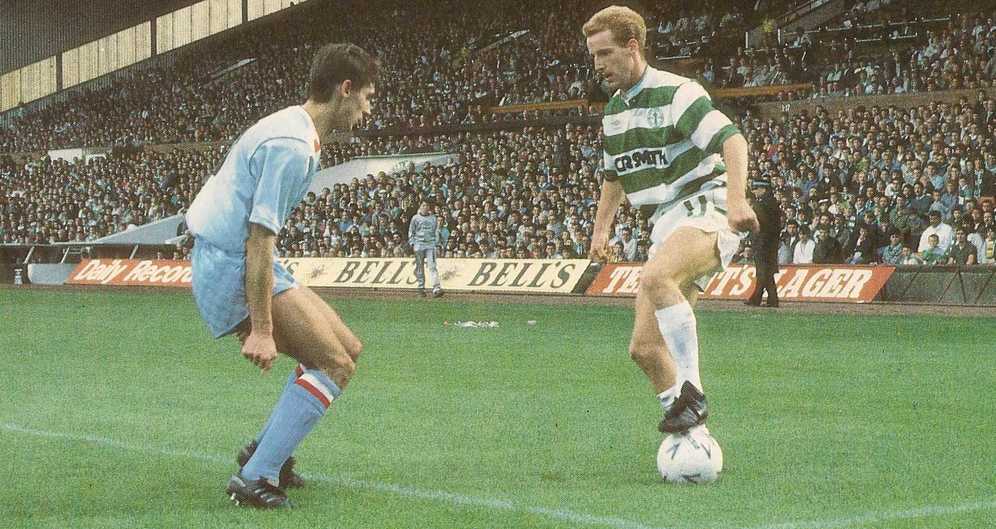 Tommy Burns found himself up against Gerry Collins, his old Bhoyhood pal from the Calton, whilst the larger-than-life character that is Chic Charnley was on the bench for Hamilton. Miller did his best to commence the banishment of the blues from Parkhead, the winger converting a Chris Morris cross from close-range in the seventh minute.

The Hoops failed to build on this early momentum, the game gradually becoming a dire, dreary slog as the crowd voiced their frustration. With fifteen minutes remaining, Peter Grant slipped Frank McAvennie in, the striker turning in the box to score expertly, surely securing the game at 2-0. 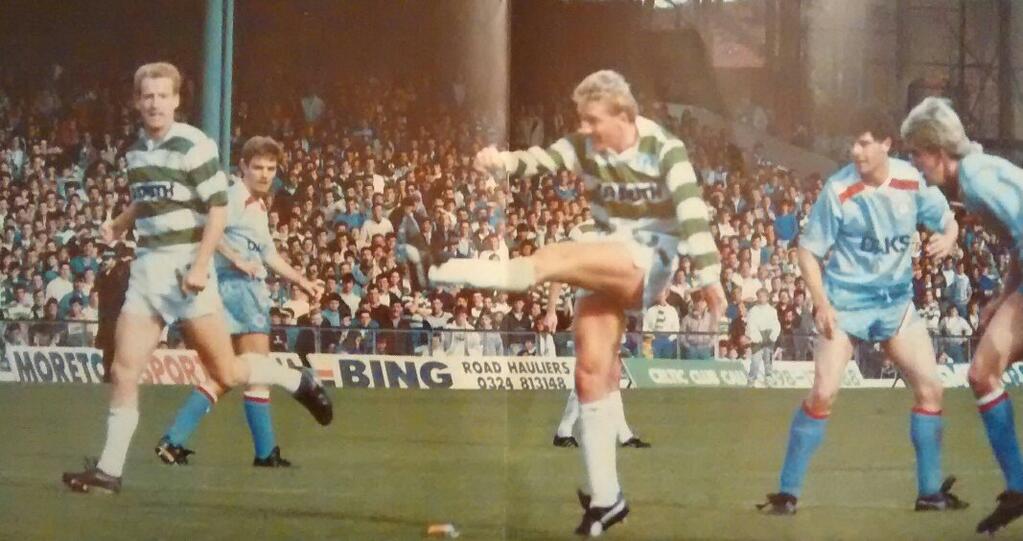 However, moments later, substitute Owen Archdeacon’s first touch of the ball after replacing Miller was unfortunately with his hand, Harris converting the spot-kick to ensure a nervy ending to the match for the under-performing Celts and their unhappy support.

Four days later, Celtic began their European Cup campaign with a first-ever meeting with Hungarian champions, Honved. The Budapest-based ‘army team’ had enjoyed their golden era in the early fifties, legendary players such as Puskas, Kocsis, Czibor and Bozsik providing the spine of the Mighty Magyars national side, famously inflicting 6-3 and 7-1 defeats on England prior to the World Cup Finals of 1954 before hammering West Germany 8-3 in the group stages in Switzerland.

The two sides would meet again weeks later in the Berne final, the Germans recovering from two goals down to clinch the trophy 3-2, thus leaving Hungary vying with Cruyff’s ’74 Netherlands as perhaps the greatest team never to win the World Cup.

The Hungarian Uprising of 1956 had led to the break-up of that wonderful side, their best-known player, Ferenc Puskas, becoming a superstar at Real Madrid, where he set a record which will surely never be broken, with seven goals in two successive European Cup Final appearances. Whilst Honved would subsequently struggle to recreate such an impact in a global sense, they were enjoying domestic dominance once again in Hungary, having won four of the last five national titles.

Although Celtic had never been drawn against Honved, they were certainly no strangers to Budapest. They had toured there back in the close-season of 1911, beating MTK 2-0 before drawing 1-1 with Ferencvaros. Indeed, a few months earlier, there had been a reminder of a famous visit in May 1914.

Willie Maley’s Hoops had just completed a hugely-successful season, winning the first of what would be four successive League titles, beating Hibernian 4-1 in the replayed final at Ibrox to win a ninth Scottish Cup (a fifth in just seven seasons) then mauling Third Lanark 6-0 at Hampden to claim the Glasgow Charity Cup, thus avenging the 1-0 victory by the same side the previous October at Cathkin, in the Glasgow Cup semi-final, a defeat which prevented a first-ever clean sweep of available trophies.

Immediately, after the Hampden win, the Celtic party commenced a tour of Hungary, Austria and Germany, the first game a 2-2 draw with Ferencvaros in Budapest, on Sunday, 17 May 1914. Four days later, a match had been organised between the Scottish champions and Burnley, who had defeated Liverpool 1-0 at Crystal Palace to win their first FA Cup the previous month.

This fixture appears to have been sprung on Celtic with little or no notice, then billed as a ‘Battle of Britain’ and, as if any additional spice were needed to rouse the 10,000-strong capacity crowd, the Bhoys would be wearing the green-and-white of hosts, Ferencvaros, whilst Burnley forsook their normal claret to play in the blue of their bitter local rivals, MTK Budapest. By all accounts, the game lived up to its billing, each side scoring a penalty apiece as the closing stages descended into a series of on-field vendettas. 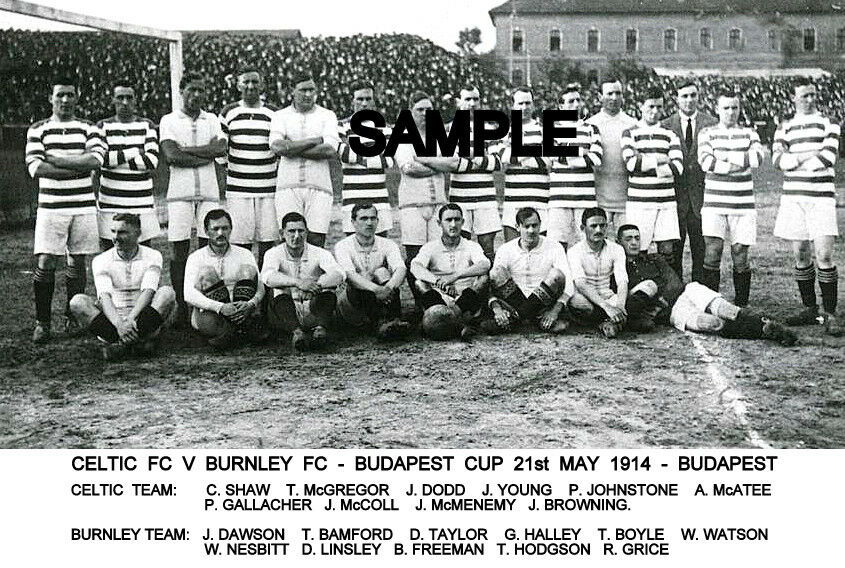 With extra-time not an attractive proposition in those circumstances, it was agreed that the clubs would face-off back in the UK in the autumn, with Burnley winning the toss for choice of venue. The Budapest Cup, reflecting a beautiful jewelled lighthouse, was then withheld, pending the outcome of that game.

Although Celtic won the Turf Moor replay 2-1, on 1 September 1914, with goals from Sniper McColl and Patsy Gallacher, sadly, the trophy would never be presented. It had apparently been sold to raise funds for the war effort, after the breakout of that horrendous conflict, triggered by the assassination of Archduke Franz Ferdinand and his wife Sophie in Sarajevo, the following month .

In his 1960 book, The Celtic Story, James Handley claims that the cup went ‘to a professional Middle-European wrestler, who won it in a raffle run on behalf of the Austrian Red Cross Fund during the war.’ 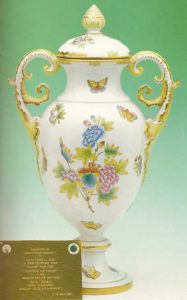 There would finally be a happy ending to this episode, albeit almost 74 years later, when a delegation from Ferencvaros arrived at Celtic Park on Saturday, 7 May 1988, as Celtic received their Centenary League championship trophy, the wonderfully-named chairman, Zoltan Magyar, handing over the Budapest Vase to Jack McGinn, in belated recognition of the Bhoys’ first ‘European Cup’ win, all those years ago.